You guys may remember my quilt Ring Around the Mole, completed earlier this year.  It's been hanging at the Hubbard Museum of the American West in a SAQA exhibit, and I was recently contacted by some people who wanted to commission a similar quilt, but with different animals.

I met with them and worked up a design they liked so I'm moving forwards.  It's the first time I've made a second quilt in the same vein as a prior one and I'm trying to track how the two compare. The design process took about as much time as before, only two of the animals (the armadillos and the deer) were the same as in my project, but I didn't have so much difficulty with Illustrator as I did last time.  Designing Ring Around the Mole was really my first foray into vector graphics and designing a quilt that way, so it helped this time around to be much more familiar with the software.

Here are three different colored versions of the new design.  The clients wanted their ranch logo in the middle and then cardinals, squirrels, rabbits, chocolate labs, armadillos, horses, longhorns, deer, catfish, great blue herons, crested caracaras, red-tailed hawks, and great horned owls.  If I've done my job correctly, you should see all of those below!  One thing that stood out to me this time was the bird feet.  My first quilt had all mammals, so there weren't any bird feet, but it was quite challenging to draw all the different bird feet for this one. 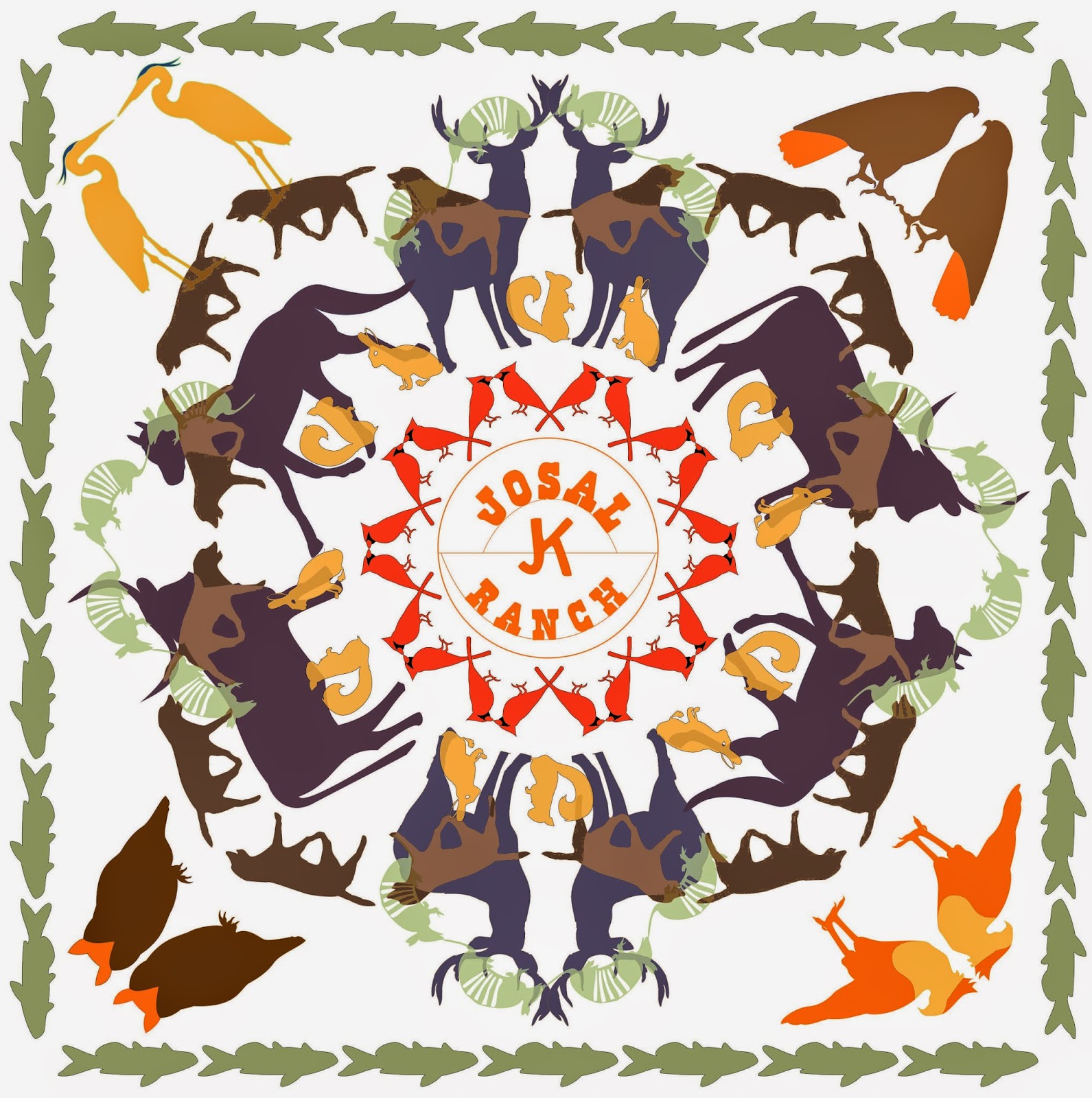 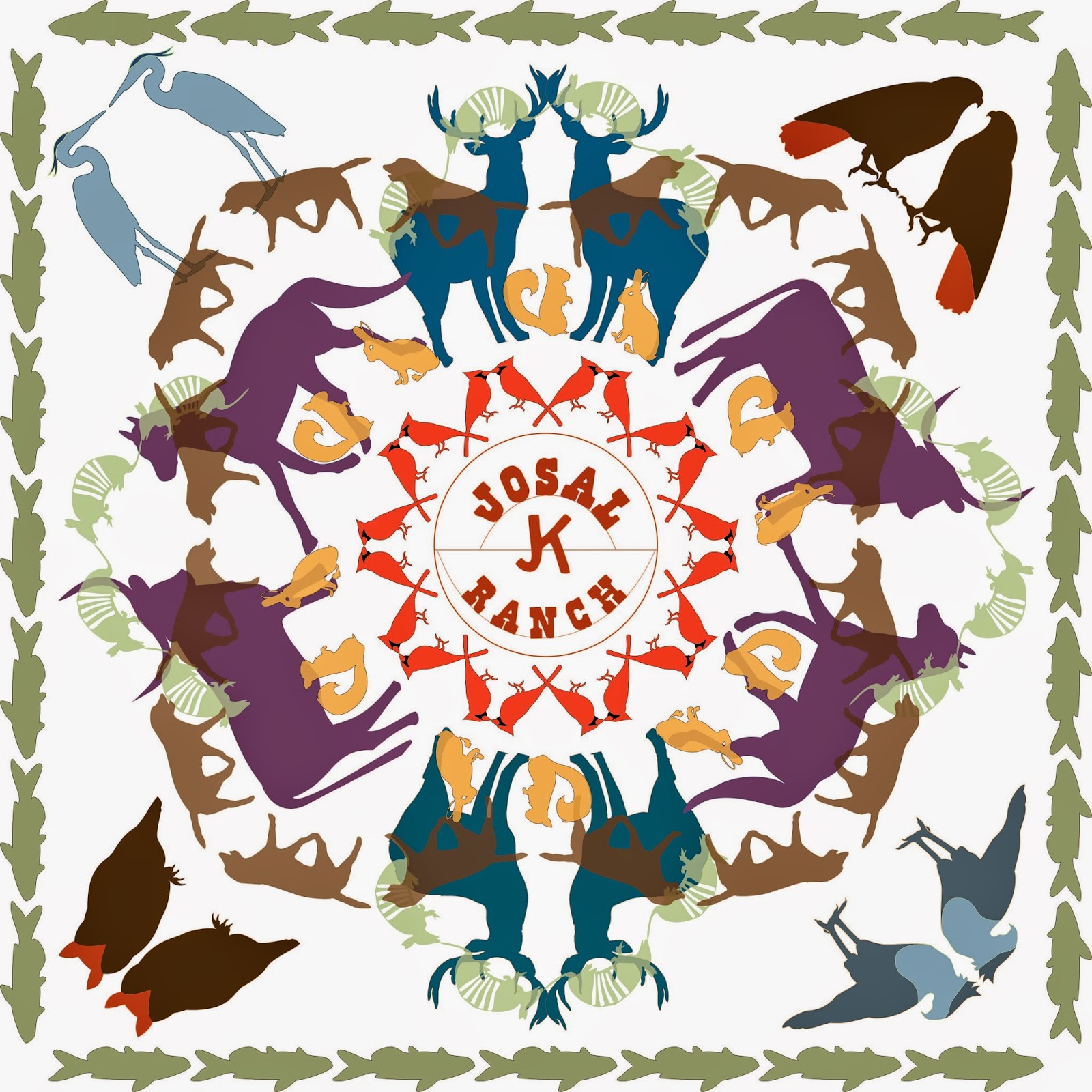 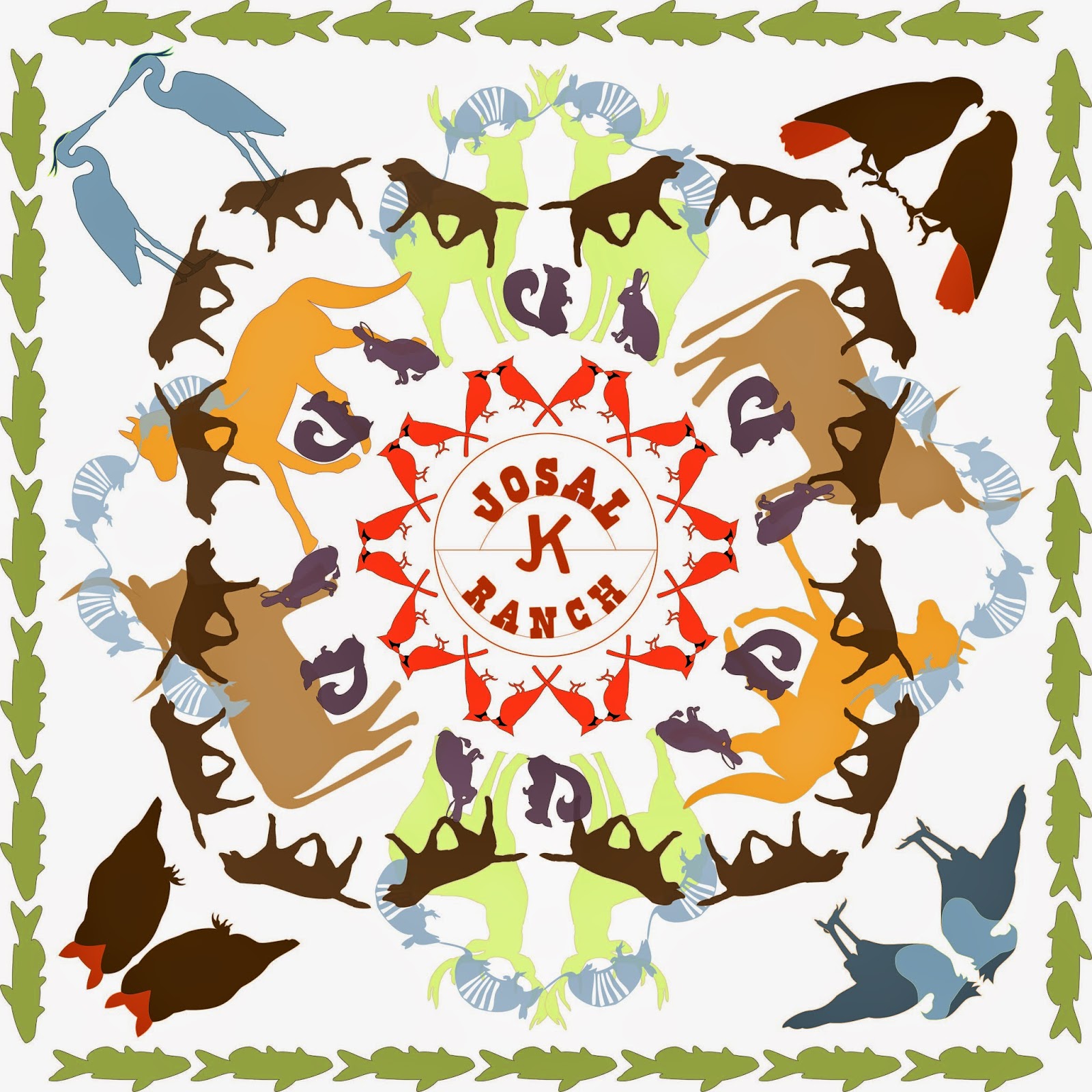 They liked the middle version of the coloring so I'll be using that as my starting spot for finding fabrics.  A lot of the precise colors will depend on what I find, and of course the colors will be much more vibrant and textured in fabric than in the drawings.  As before, I'm going to have to be careful to prevent it from getting too busy, but I think I'll be able to find a balance.  I'm excited to be starting something new, and it was fun to mock up a design for someone who I knew really liked my quilts.

Posted by Shannon at 8:00 AM 4 comments: Links to this post

Ever since I moved into my new studio, my back bedroom has actually be set up for guests.  For a long time I had both twin beds pushed together to be a single king size, but for a variety of reasons I decided to separate the beds back out again.

One primary reason (and the reason I'm sharing here) is because it means two of my earliest quilts get to be out enjoying some use!  The first is One Hen, Two Ducks, from 2009.  It had previously been out in that room but was way too small for a king bed so always looked quite funny draped over it.  The second is Eye on the Ocean from 2008.  It was actually the first quilt I ever entered into a show and was made from a bunch of fabrics I bought on wonderful trip to Hawaii.  It's been in a bag under my bed for the last several years so I'm thrilled it gets to come out and have some fun.

Of course when paired with the boldly patterned roman shade my sister and I made and some other older quilts on the wall, it gives the room an all-color-all-the-time look, but that's me all the way! 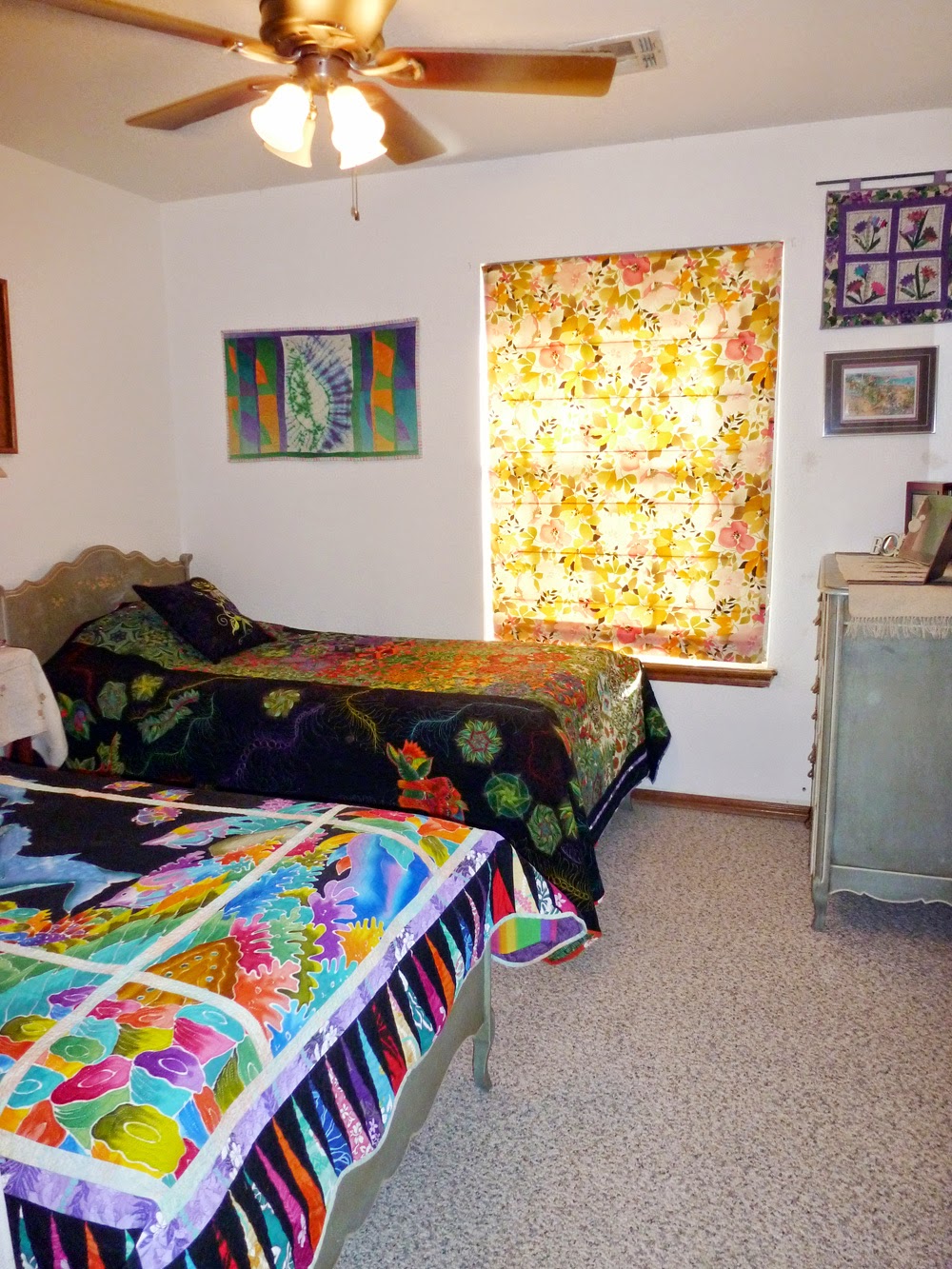 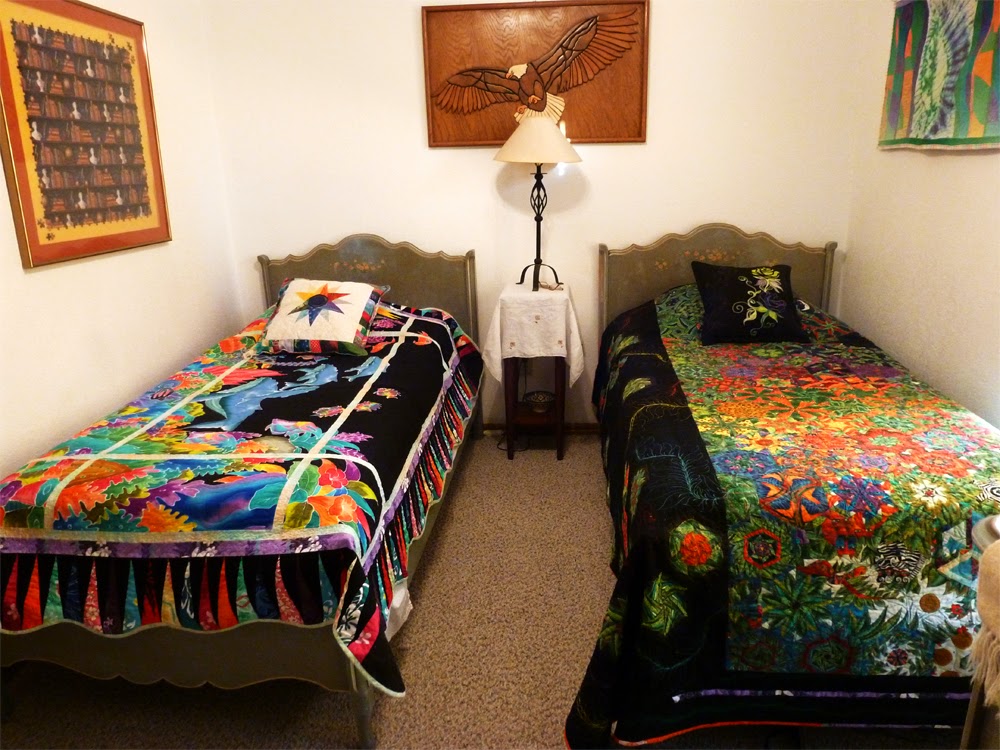 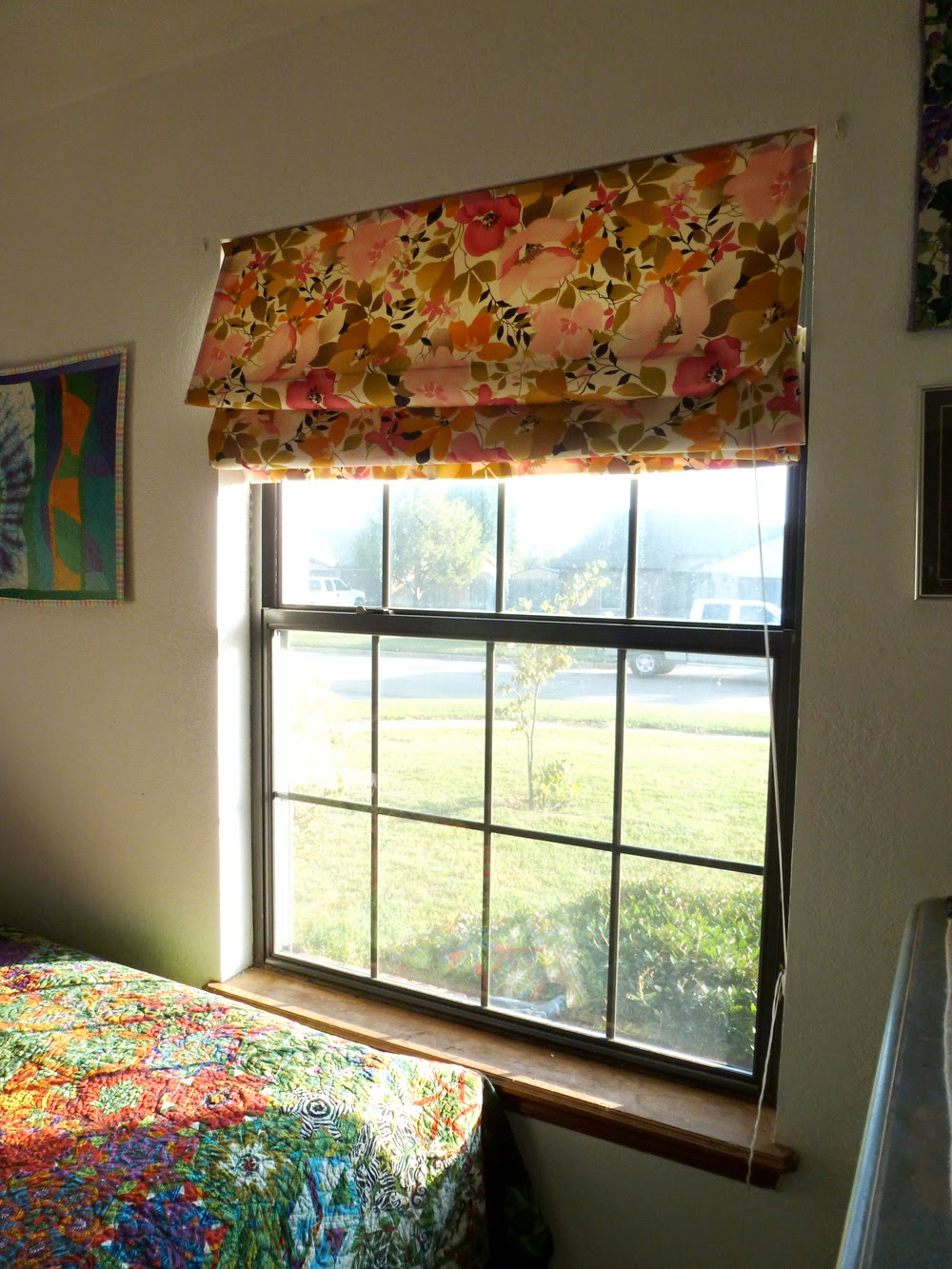 The Yucca and the Moth: Finished!

I finished my yucca quilt!  Facing, pocket, label and all.  (It's kind of like the lions and tigers and bears, but much more tedious).  You can see more posts on it here and here I really like the way it turned out- it's much more golden in person; so many of the fabrics have sheen and texture and shimmer.  My only regret is how many thread knots/nests are visible on the back.  Enjoy! 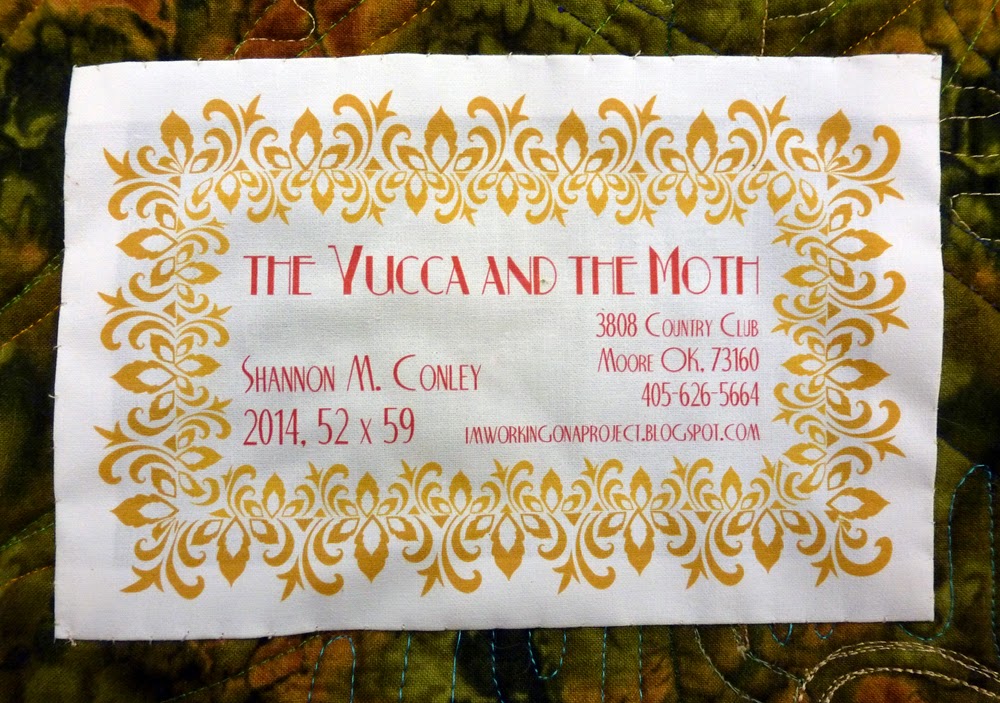 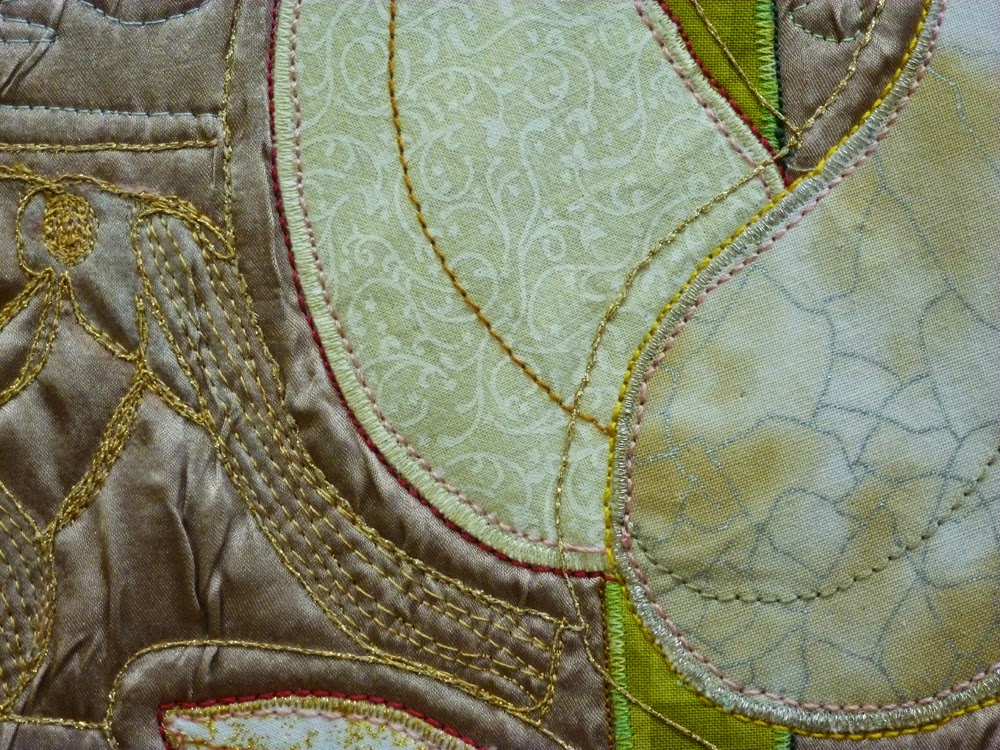 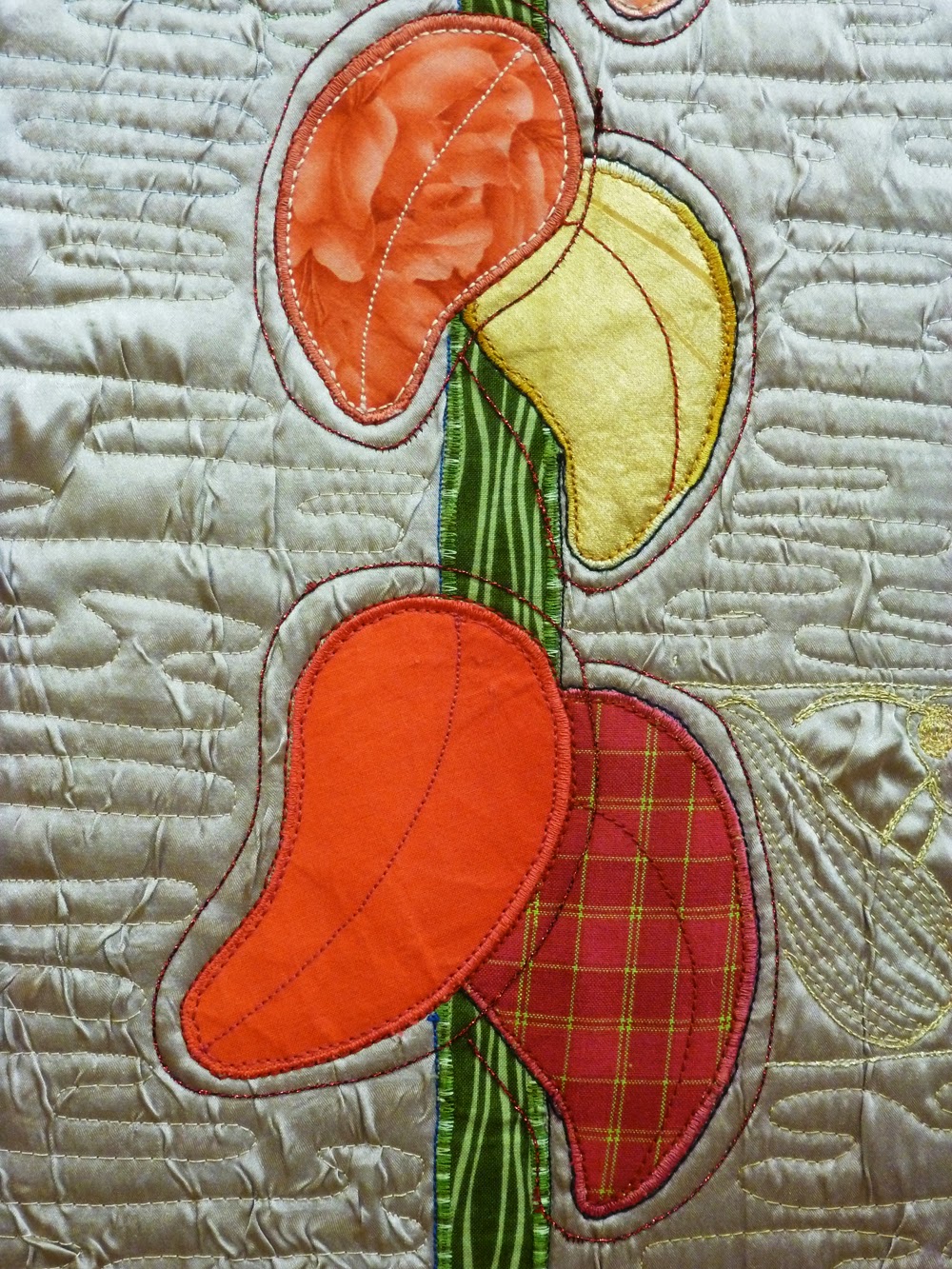 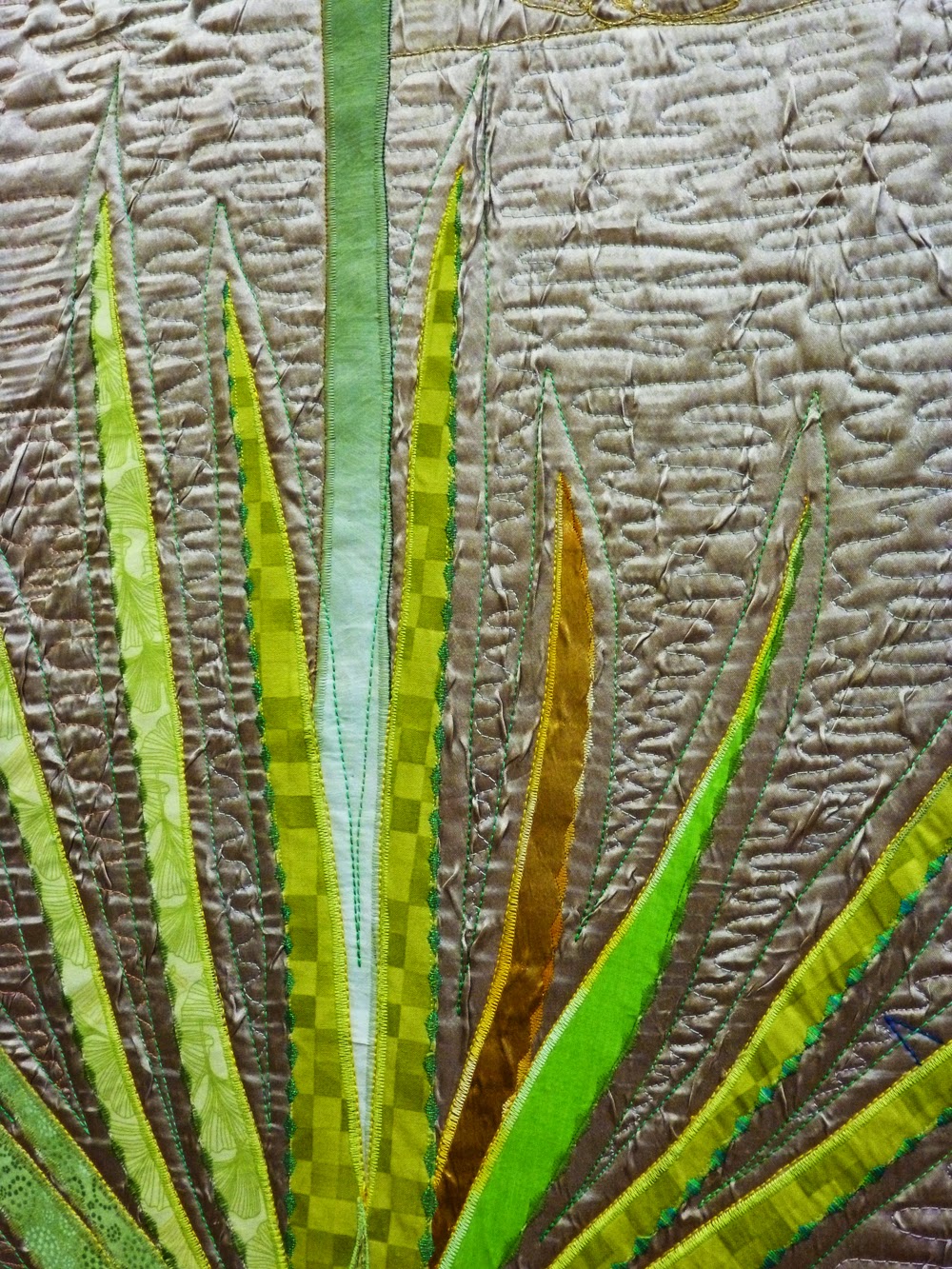 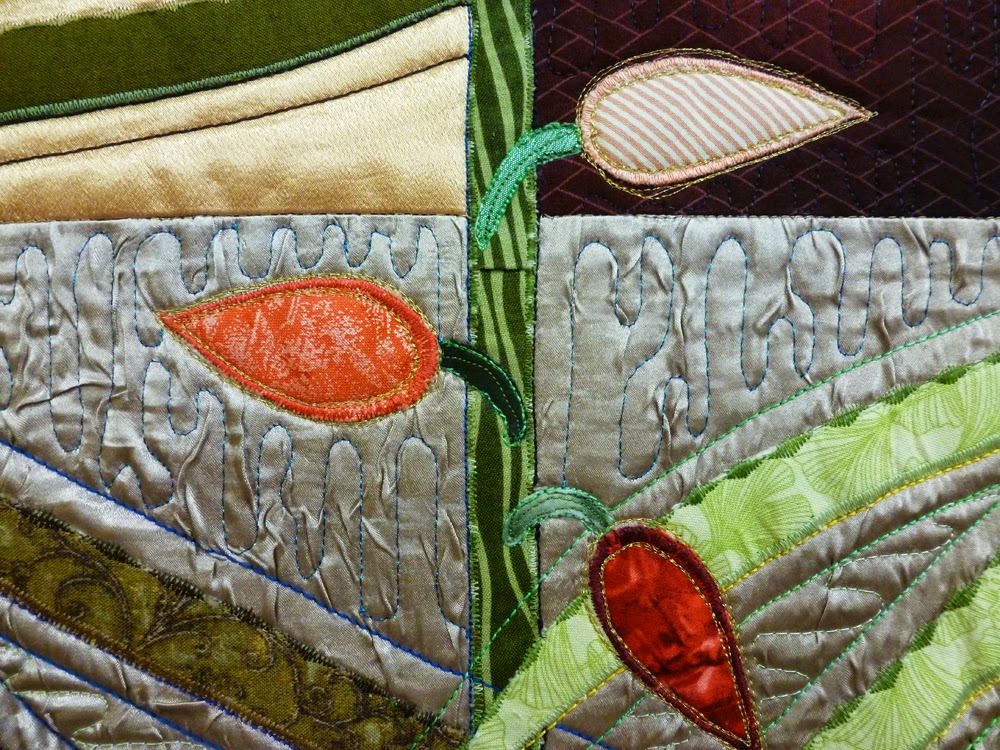 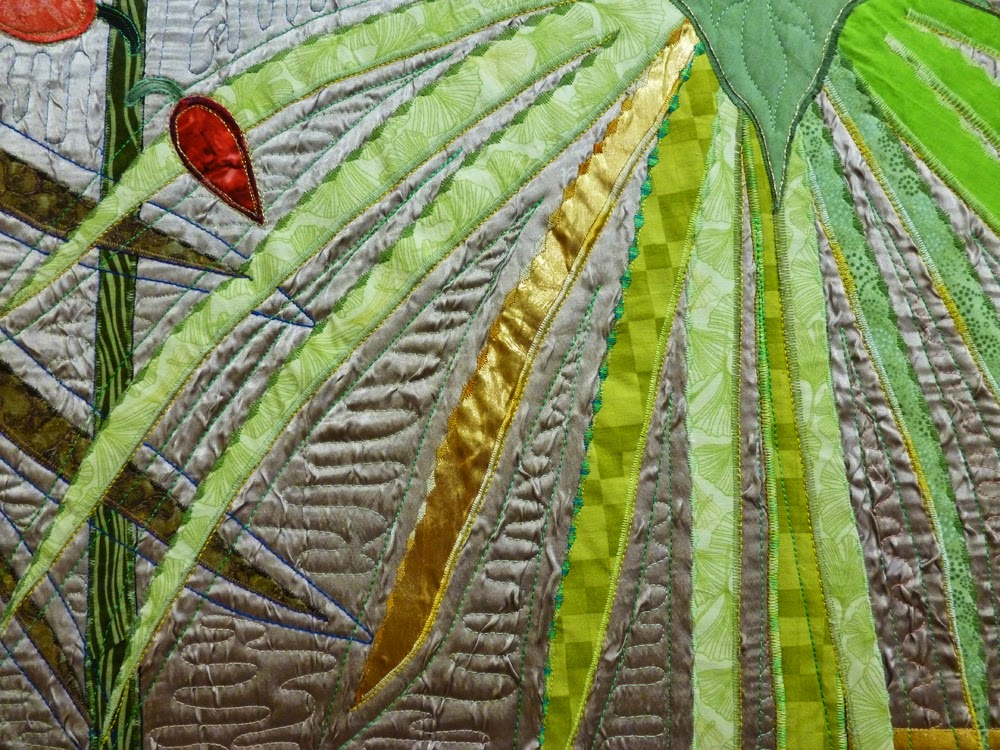 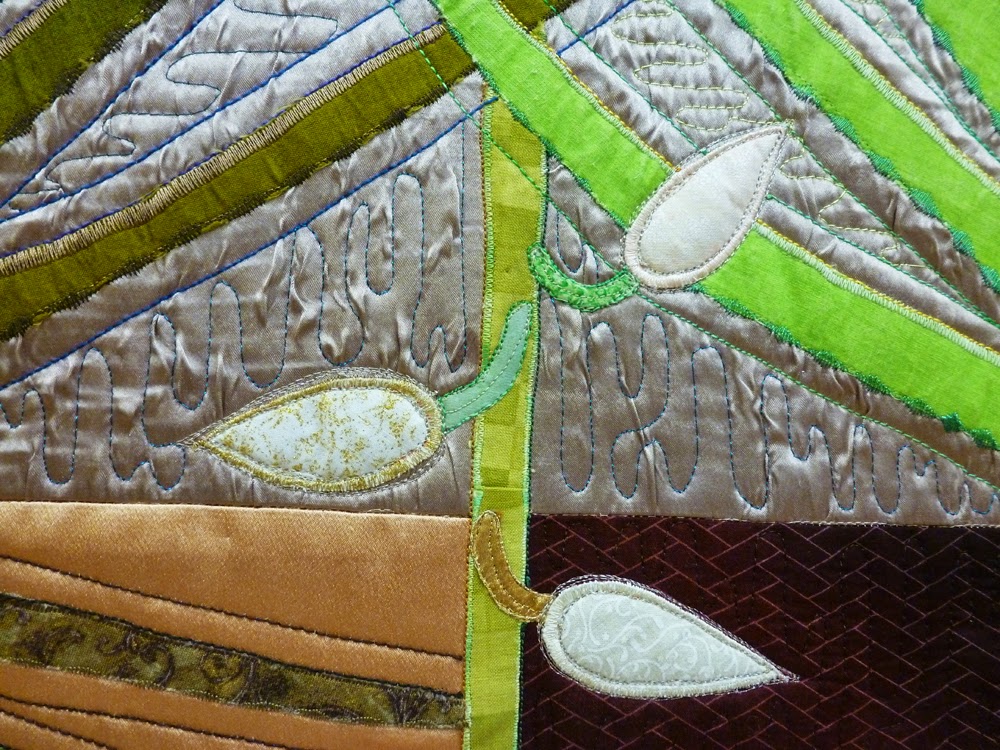 Linking up with Nina-Marie as always, go check out all the fabulous links over there!
Posted by Shannon at 2:03 PM 8 comments: Links to this post

I'm here today to share a project that wasn't an utter failure but came pretty close.  Mike wanted a lined coozy-cooler-case for his half gallon water jug so he could mount it on the bike for his long road trips.  We decided to make it out of neoprene with a lining of that stuff that car sunscreens are made out of.

The problems began and ended with the choice of materials.  I started with the lining, and noticed first, that it was too stiff to force under the sewing machine and that the wrinkles from the folding sunscreen made pretty permanent fold lines.  I wound up using a combination of glue and large hand stitches, all put in with a curved upholstery needle. 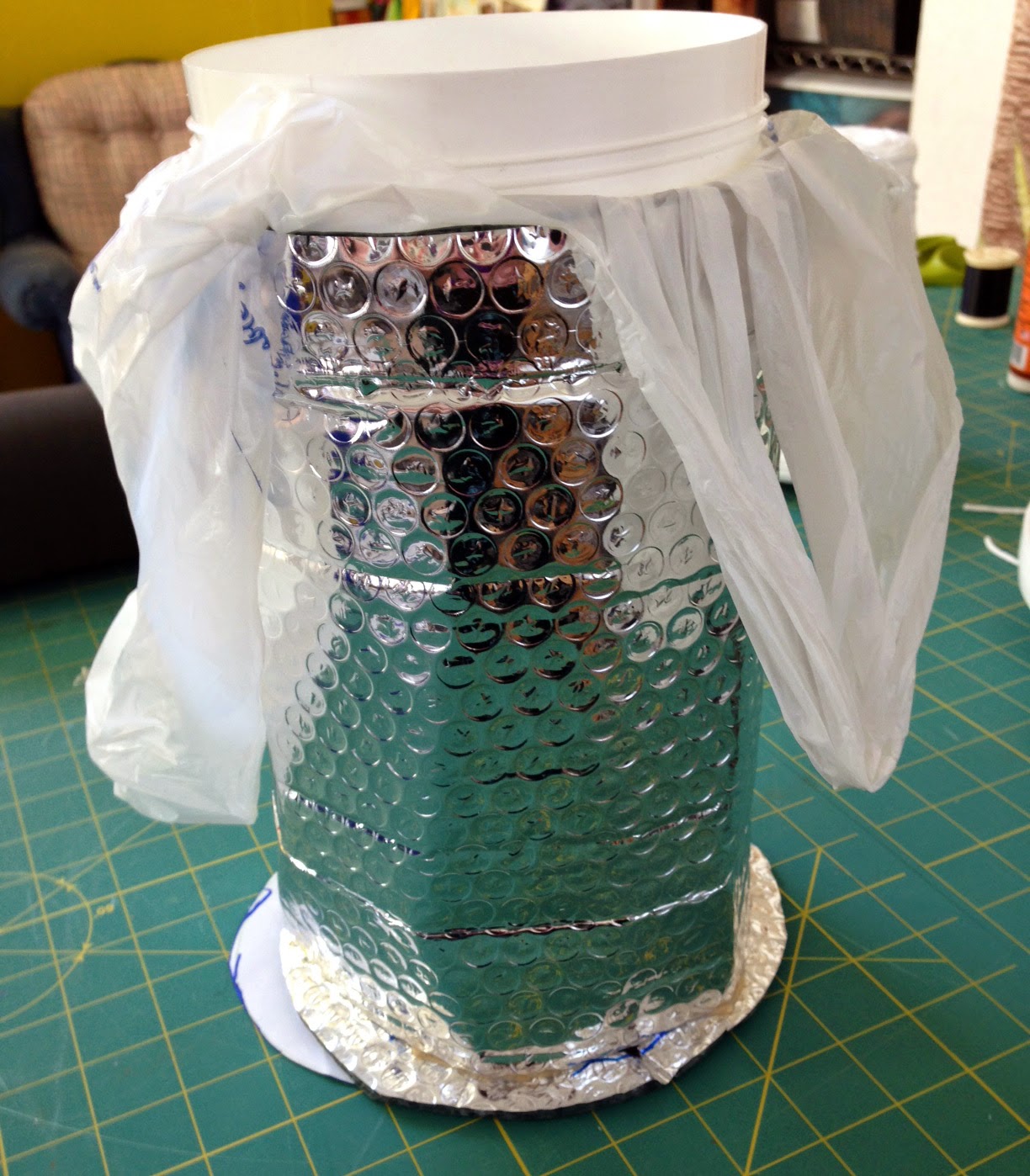 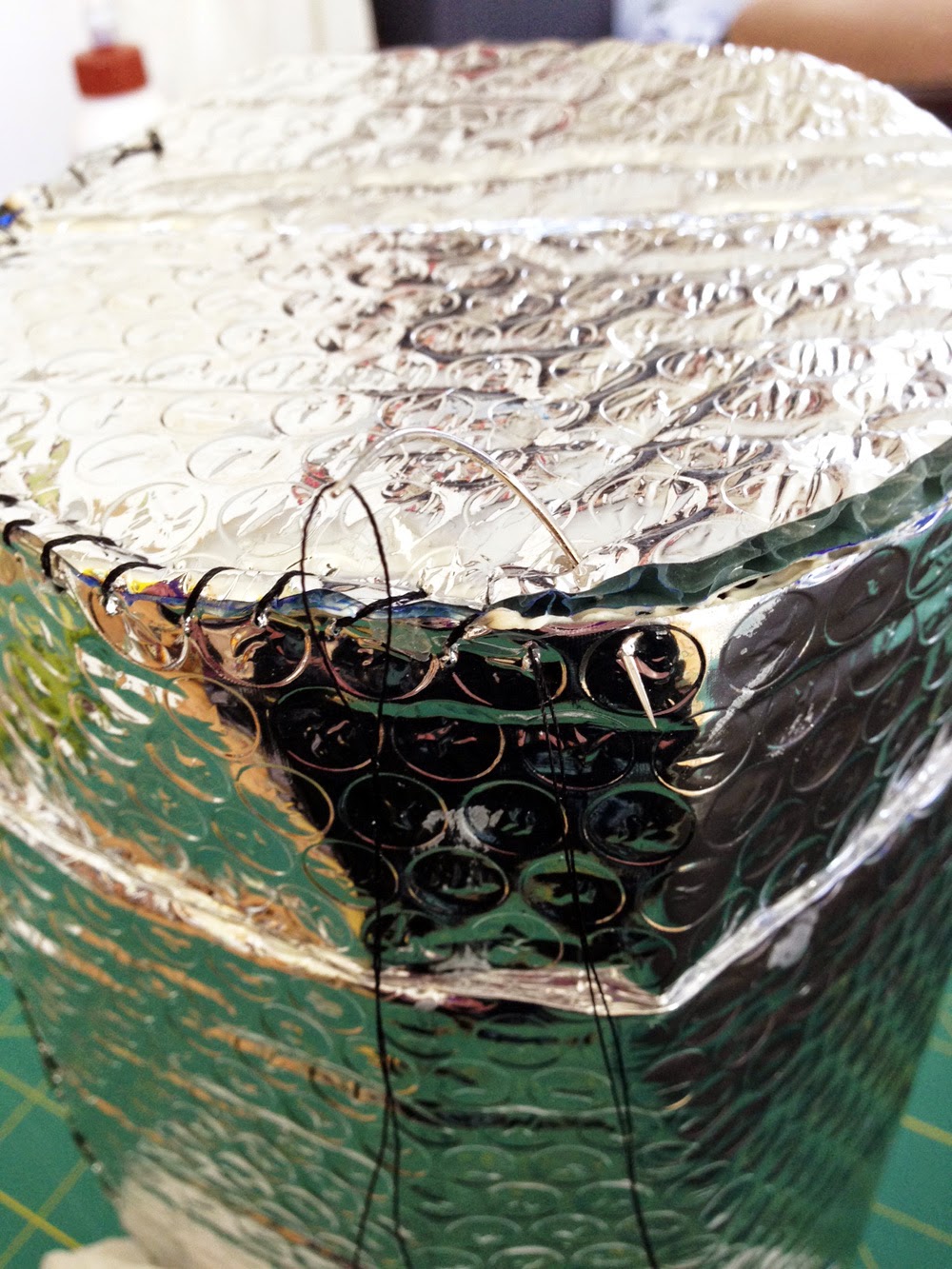 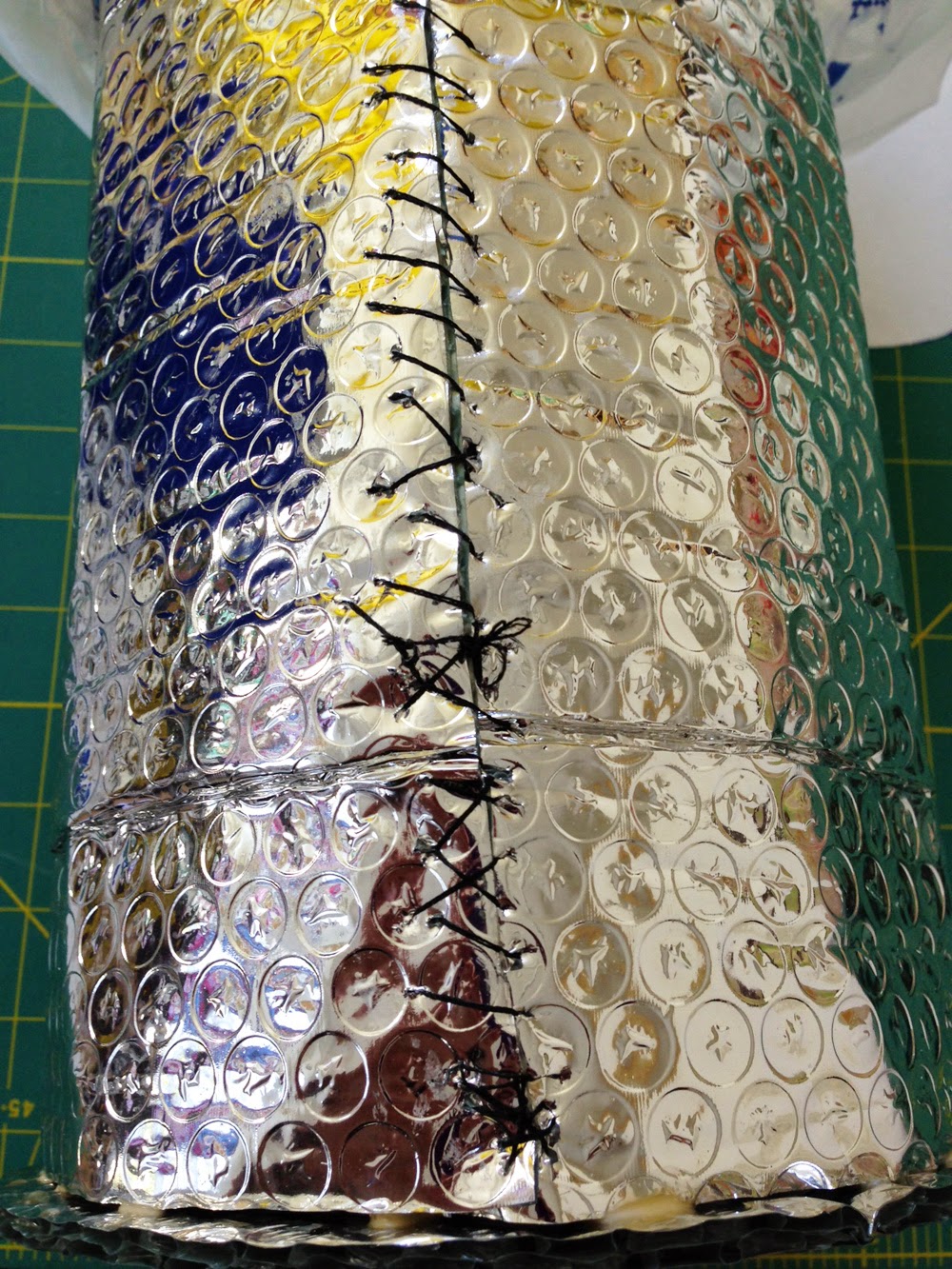 The neoprene was way worse however.  We couldn't find any locally, so Mike ordered some we found on Amazon.  Unfortunately it wasn't quite what I was expecting.  It was flimsy and wasn't fabric lined on either side.  It's one of the reasons I hate buying specialty fabric online- you never know quite what you're going to get.  It was crazy expensive too!  Anyhow, I couldn't sew with it at all without covering both sides of every seam with tissue paper, which made a huge mess when I ripped it off.  I discovered the serger worked fairly well to sew the seams (it was pretty thin stuff), but the fabric had absolutely no strength!  It tore like paper as soon as you'd sewn it down.  He wanted a little strap on the bottom to loop over the back bike footpeg, and one on the side through which he could insert a bungee cord, and both tore off in an instant the second he tried to put them on the bike.  What horrible horrible material.  Anyway, the cylindrical case itself was ok, but it's terribly ugly. All the seams are wretched and I'm never working with that stuff again.  I'm sort of ashamed to have him go off in public with something like this, but he's leaving Tuesday and it's too late to make something else.  I told him if he didn't care about the "insulating" factor, I'd make him something much nicer out of canvas or something truly sturdy.  I say "insulating" in quotes because I don't actually think the thing will provide a whole lot of extra insulation over what would be achieved just with the cooler jug itself, but who knows. 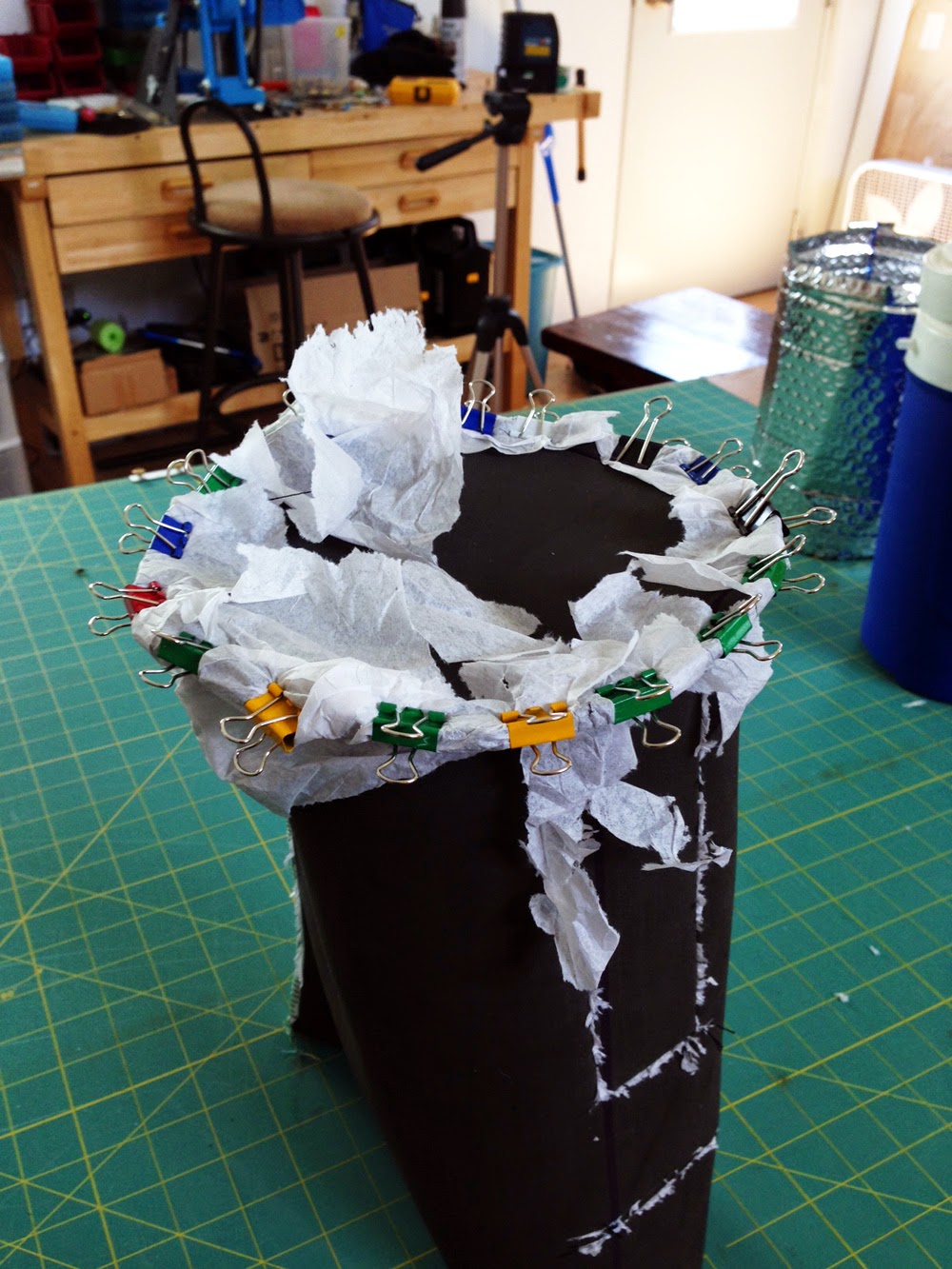 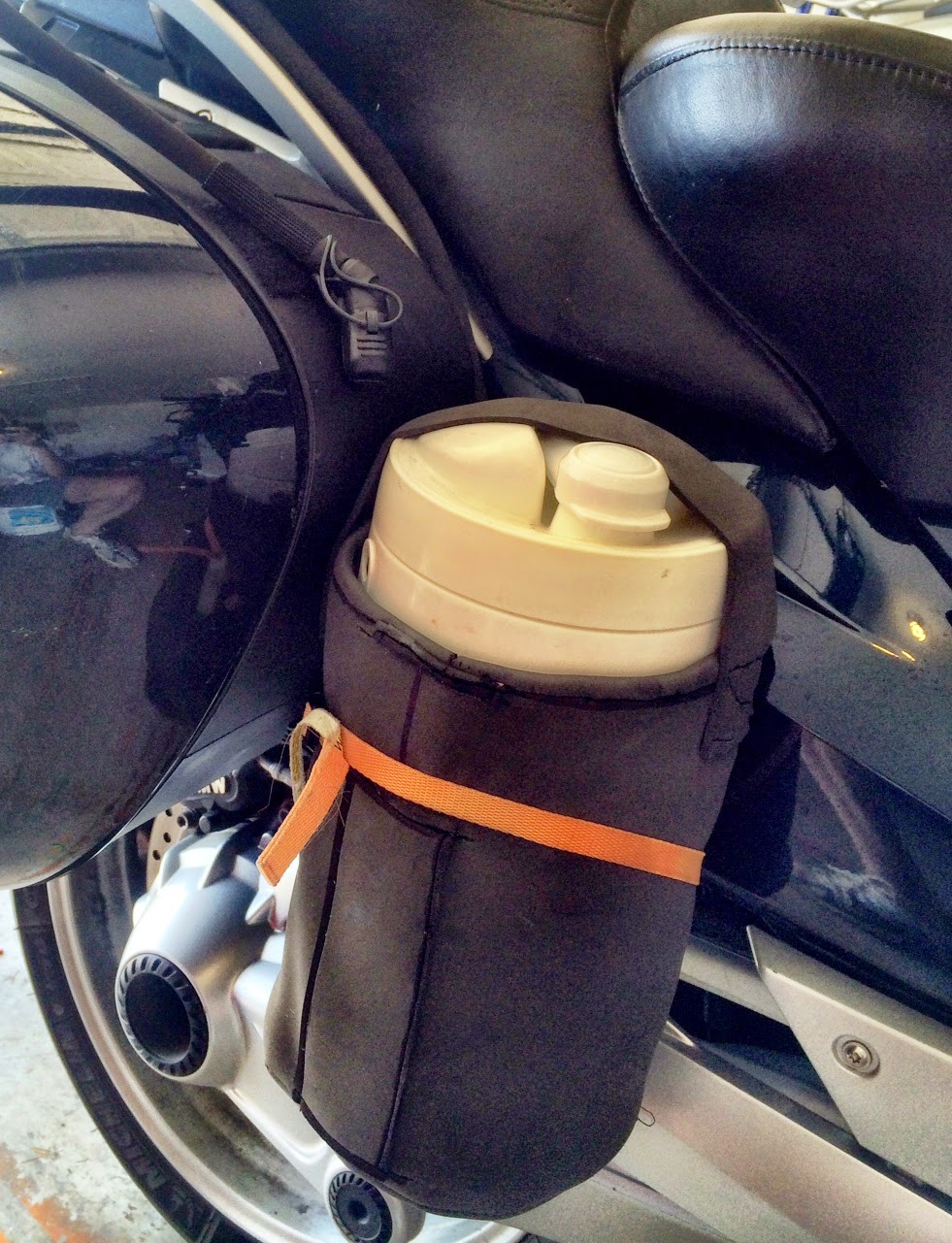 I almost didn't post this project, but I figured I might as well!  Not everything goes as planned, but it could have been worse!

Posted by Shannon at 9:17 PM 3 comments: Links to this post

I didn't realize how long it had been since I'd posted until I clicked over today.  I've been quilting away on my yucca quilt.  Progress has been almost glacial in pace, and I think part of why I haven't posted is because I feel like progress was so minuscule as to be unnoticeable.

However, the fact is, I've now finished the quilting, so the project is definitely farther along than when I posted last!  I think the last picture I showed was this one of the top assembled but before I'd added the final flower buds. 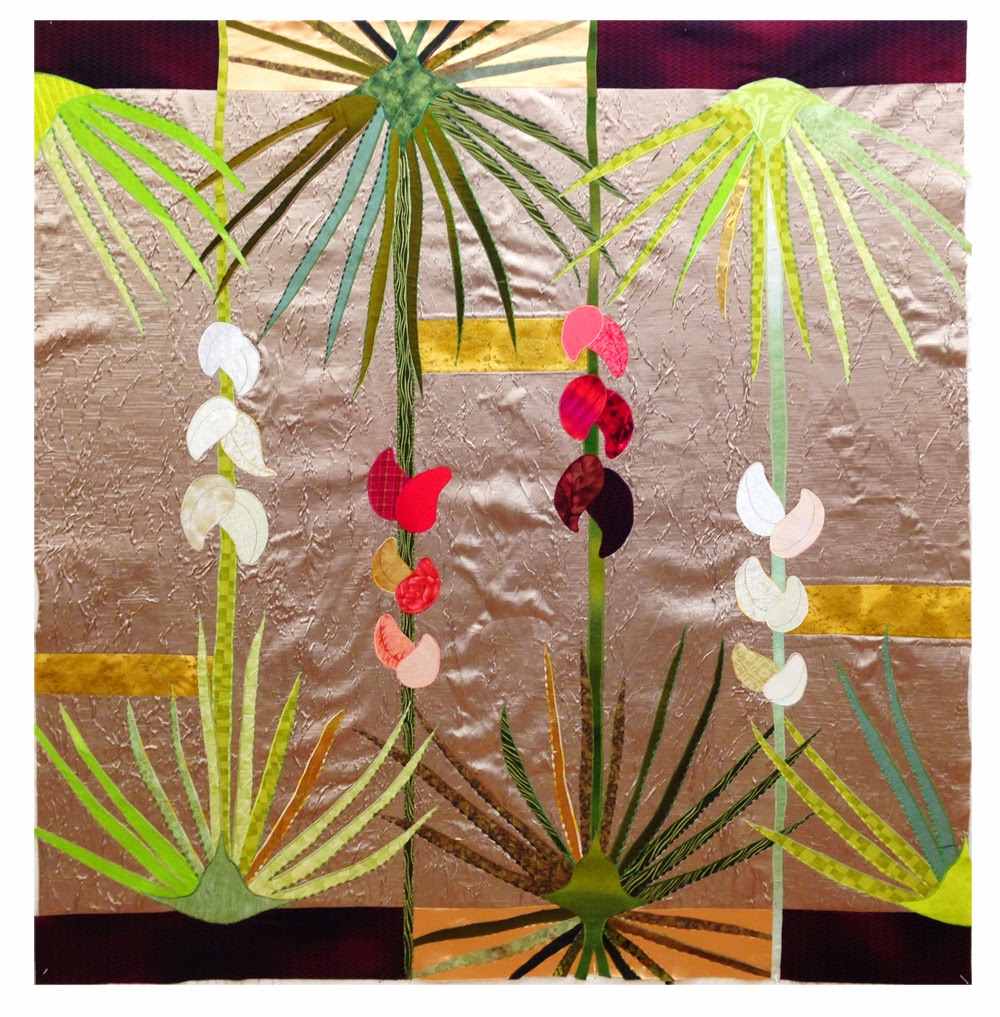 Part of why progress on this was so slow is because I've been using 12 wt top stitching thread to outline and echo all of the applique pieces.  Some of them are even outlined twice (once on each side of the satin stitching).  Unfortunately, my machine does not like to free-motion with this thread, so I've been pushing the mass of the quilt around and around and around and around under the throat plate. 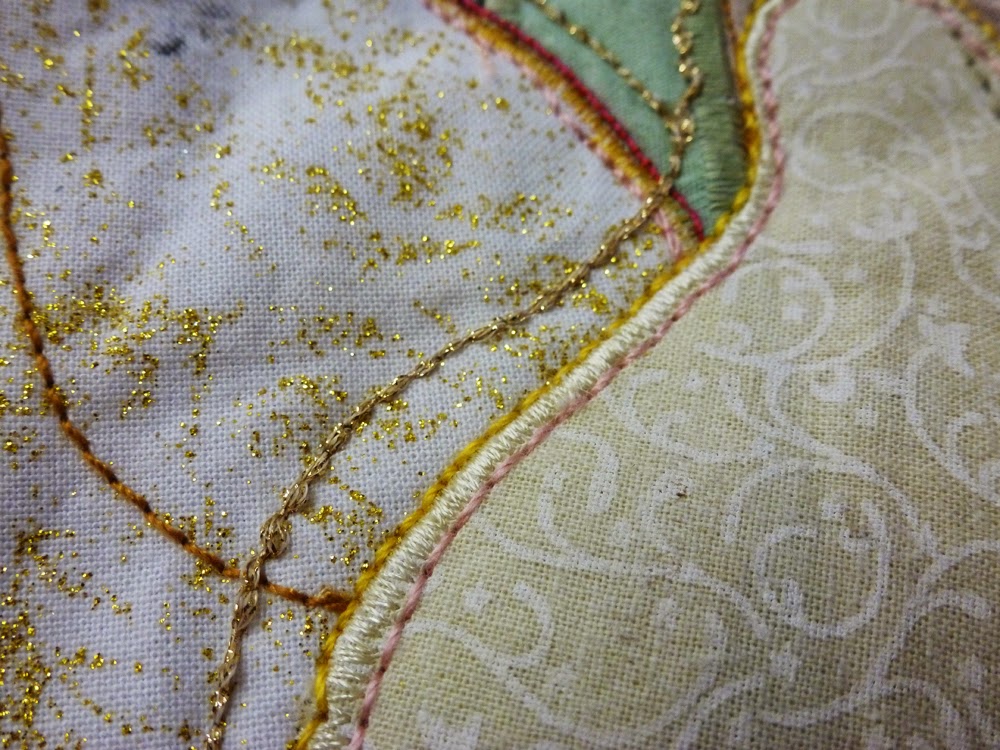 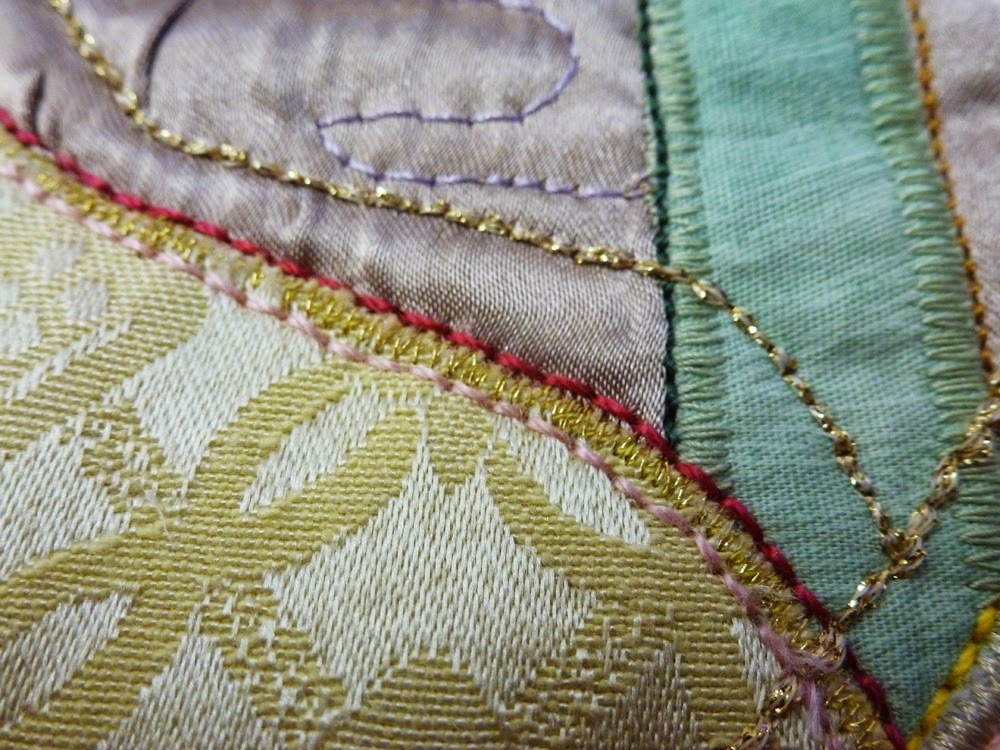 In addition,  you can't really backtrack with the top stitching thread (it's really obvious and heavy looking) so that adds to the stops and starts.  Finally, on things like the yucca leaves where you might think you could just start once and go back and forth, you can't really because they're only ditched on one side of the leaf (although the echoing is more continuous).  All of this was my own fault in terms of the design, so I'll definitely know better next time. 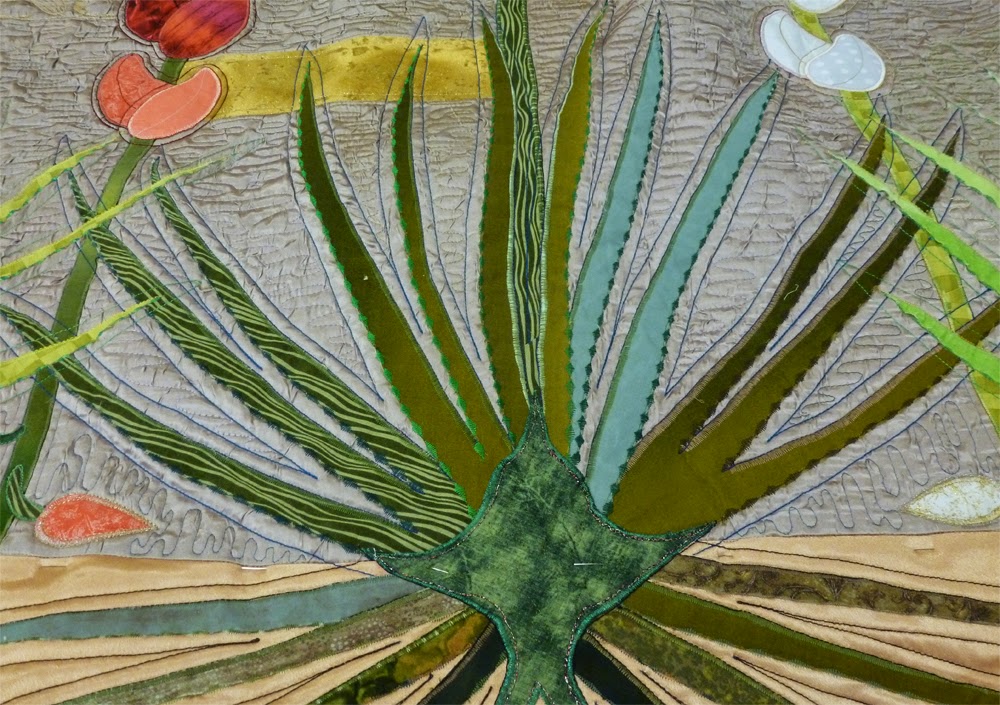 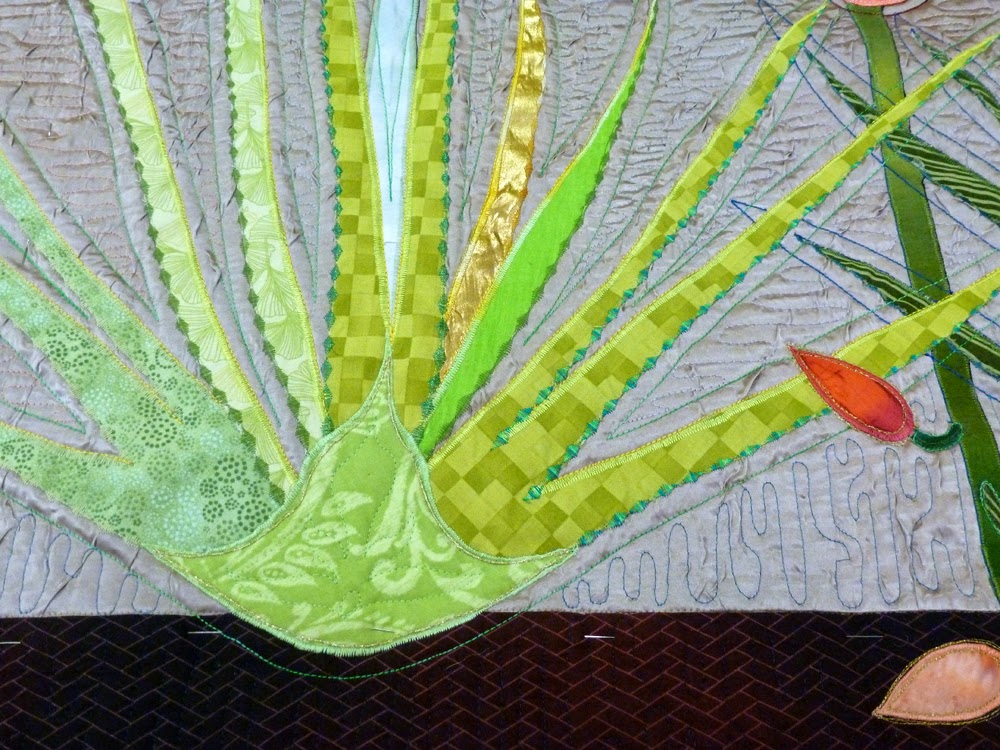 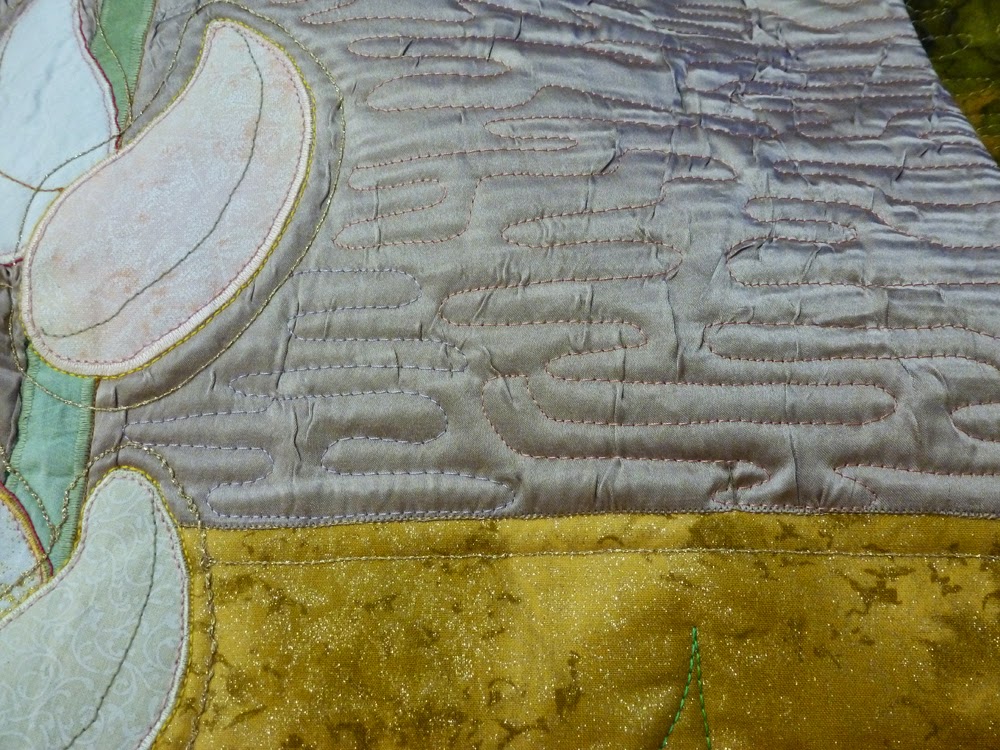 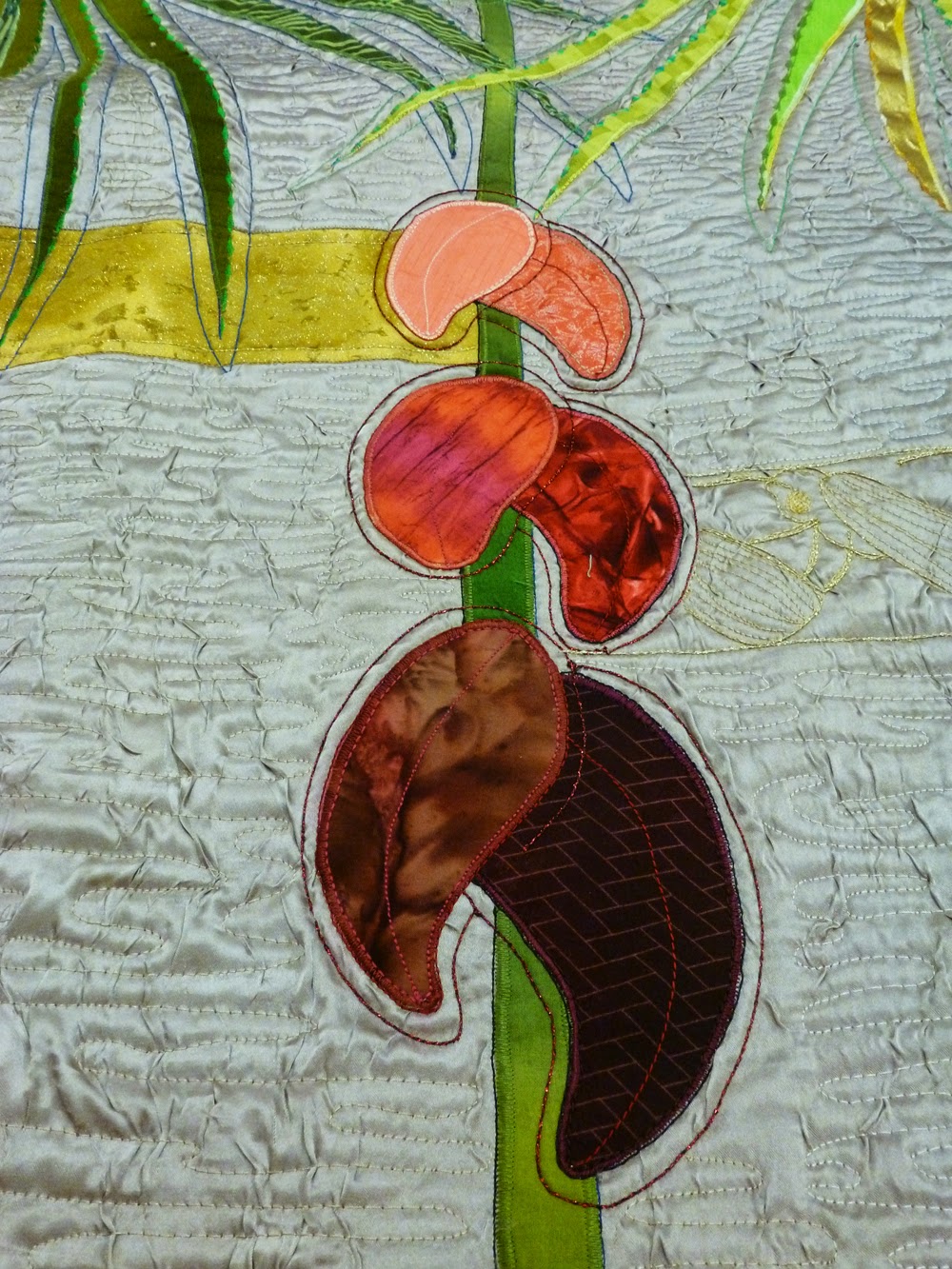 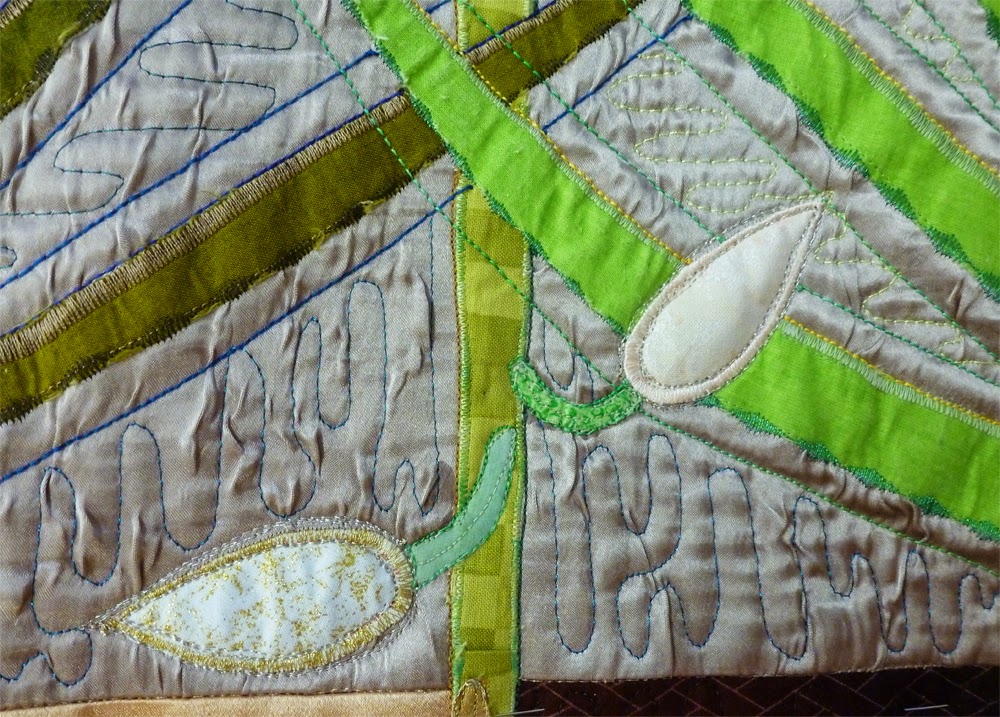 The only place I have "interesting" quilting is in a couple of horizontal bars where I've stitched in a repeating yucca moth design.  I wanted to include the yucca moths somewhere; they live inside the flowers and pollinate them, but more appliques felt out of place.  I thought the repeating pattern was kind of fun, almost like echoes of an Egyptian or Arts and Crafts border. 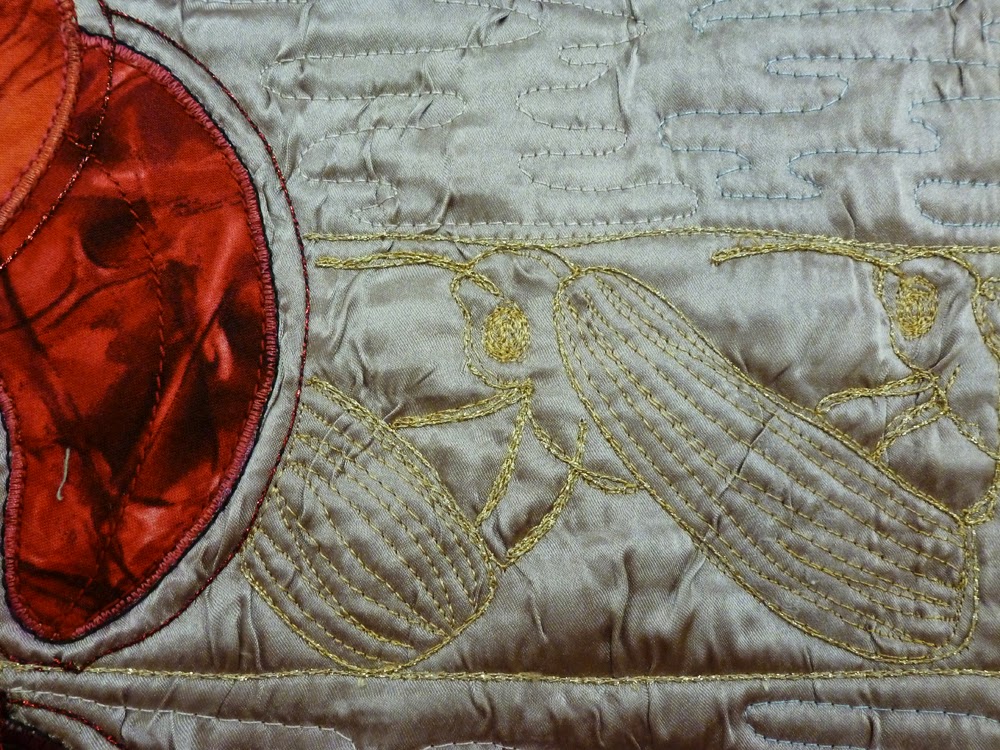 I'm really pleased to be moving forward on this even if it's been frustrating at times.  I've  blocked and squared up, but unfortunately I forgot to take pictures when it was on the wall, so these were taken while it was laying on my work table.  I've just got to do the facing, label and pocket (oh if it really were "just"), and then I'll show some final pics and move onto a new project!
Posted by Shannon at 10:46 AM 5 comments: Links to this post