The Sister Tree is Finished!

Thanks so much to everyone who made thoughtful suggestions and comments on this quilt!  I was really frustrated there in the middle of the project, but I it turned out much better than I thought it would.  It's really growing on me- kind of like a fungus (the nice cheese kind maybe).

Incidentally, I ask Mike all the time for his opinion on my WIPs and he hates it.  He usually likes my quilts and projects but isn't particularly interested in the details.  As the only other person at home though, I'm constantly dragging him out to the studio to say look-what-i-did-today or something similar (usually after only making incremental progress since the previous day), and his stock response is "very nice honey".  In this case though, he suggested the pink border and even selected the fabrics I used.  I was evaluating a bunch of different pinks, greens, and combinations thereof, but I'm so glad I went with the ones he picked.  I think it changes the whole feel from this, and I'm glad I didn't go with any brighter border colors.  I'm really happy with the piping in the binding, I've been slowly getting better at piping and this is my best try yet.  Not perfect but close.  I like using a washable glue stick for making my piping (and lots of other things), I think it helps.

Finishing this was my main February goal over at the Fiber of All Sorts Lovely Year of Finishes, so I'm linking up over there, and since it's a finish I'll add it at Richard and Tanya's.  As usual, I'm also linking up at Nina-Marie's for Off-the-wall Friday, her readers were so much help! 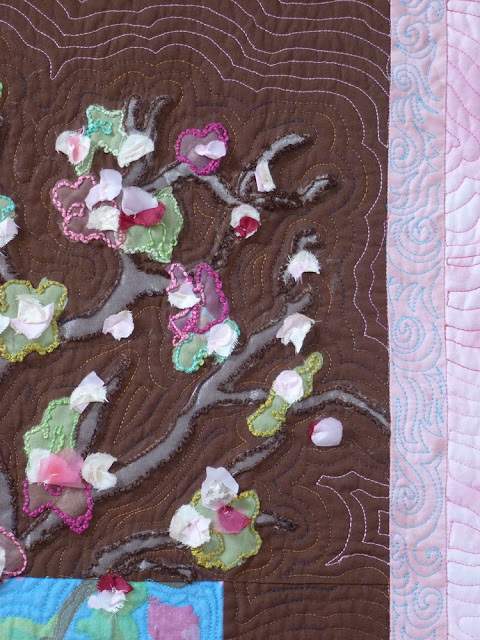 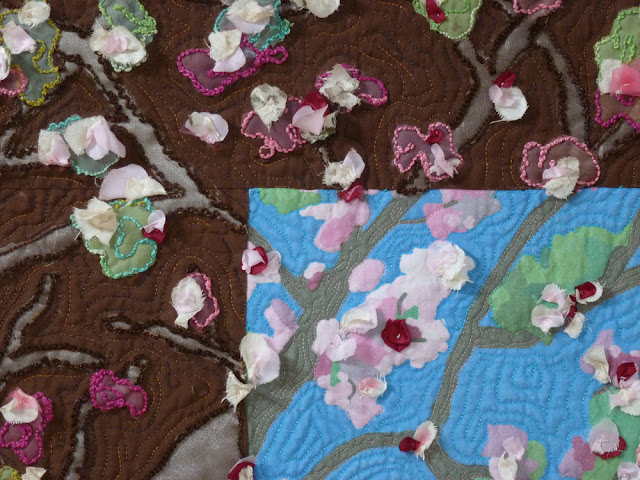 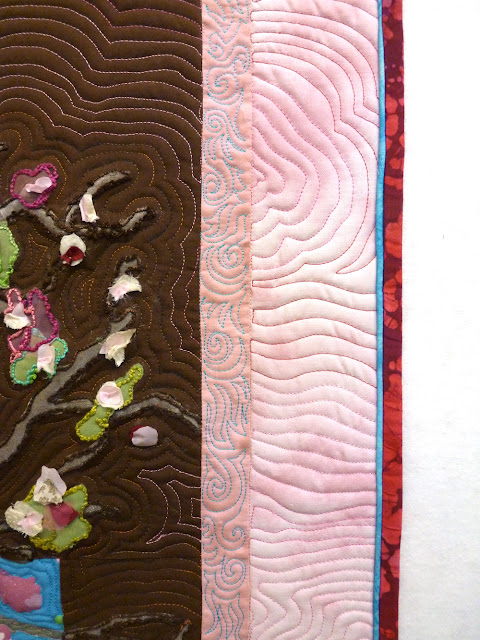 So in the beginning I wasn't smart enough to match my blog title to my URL.  I decided to fix that now, (welcome and make sure you point your browser to imworkingonaproject.blogspot.com) but I think all my internal links are now broken.  Sooo sad.  Suggestions anyone?
Posted by Shannon at 5:32 PM 1 comment:

Hi everybody!  Hope everyone out there in blogland is doing well.  I haven't been organized enough to get a WIP: Wednesday post together in a few weeks (ouch), but I have been sewing.

Finishes (in the last several weeks):

1. My tree quilt (hooray),  now officially named The Sister Tree.  Check back on Friday for a final write-up about that.

2. My text messages entry for the SAQA text messages show.  Not sure I'll get in, but the quilt's finished, and named In Nomine Patris.  I haven't shown it here yet, but it's been my primary design project this winter.  Maybe next week I'll get around to getting some good pictures and writing a couple posts about the design process.

3. My new purse to take to Asilomar.  I've been following along over at LiEr's blog ikatbag, (seriously you guys, one of my very favorite blogs) as she does a series on designing your own bags.  I decided to make myself a new purse/carryon to take with me on my trip to CA in a couple of weeks and this is the outcome!  I've made bags without patterns before, but they've mostly been fairly simple totes.  This is the first time I designed one from scratch (I know it's fairly simple but still) and I'm excited to have gotten everything assembled (straps/hardware, closures, piping, zippers, piecing, lining, pockets, etc.) in the right order without having to undo any of it half-way through.  It's fairly good sized purse but not huge (not as big as a standard messenger bag) and the strap lengthens enough to go cross body if necessary. 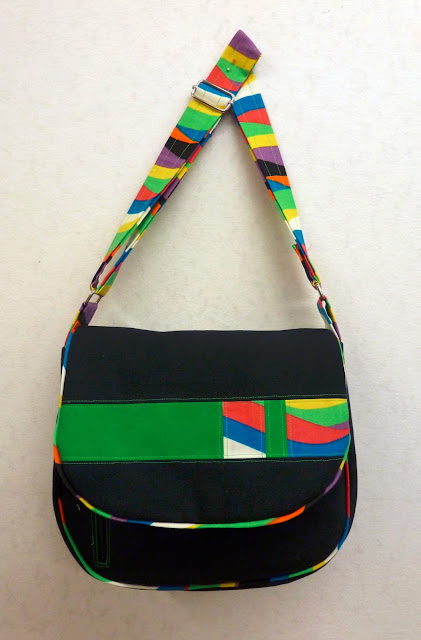 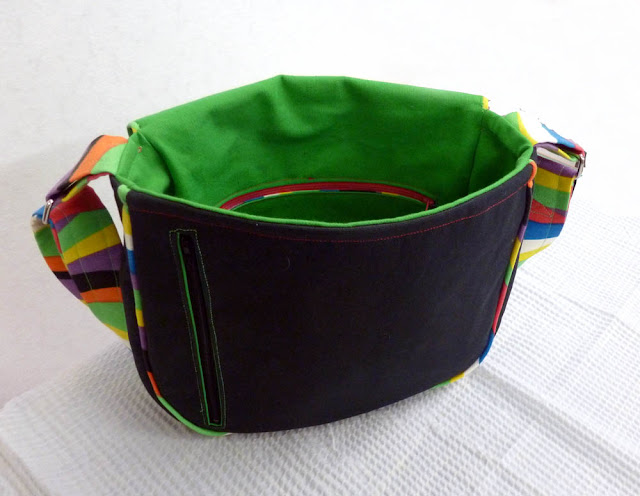 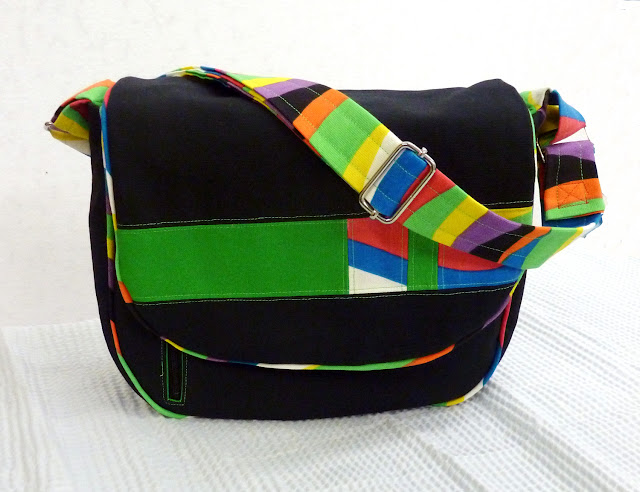 The main things I'm working on right now are small miscellaneous things, like changing around the pocket configuration on Seymour the Dinosaur.  I'm also working on some photoshop design projects for an online class on using photoshop to make fabric (more on that to come too).  Most exciting, I'm getting ready and doing some design prep work for the upcoming Empty Spools Seminar my mom and I are attending in less than two weeks.  If you don't know about them, Empty Spools seminars are 5 day quilting classes held at Asilomar State Park near Monterey CA.  This year we're taking a class from fabulous Australian Art Quilter Gloria Loughman and I'm so excited!

Email ThisBlogThis!Share to TwitterShare to FacebookShare to Pinterest
Labels: Bags

I love Valentine's Day, such a fun excuse for crafting, and I wanted to share the valentine's I made for my loved ones this year.  I'm not sure how I stumbled upon this Martha Stewart Craft Post by Erin Jang of Indigo Bunting, but I love rebuses and matchbox crafts (I made an advent calendar out of them actually, but I guess I never posted about it), so I thought I'd try a variation on the idea for my valentines.

I think the idea would be easy to adapt for any holiday or birthday- you might give it a whirl if you're looking for easy card alternatives. 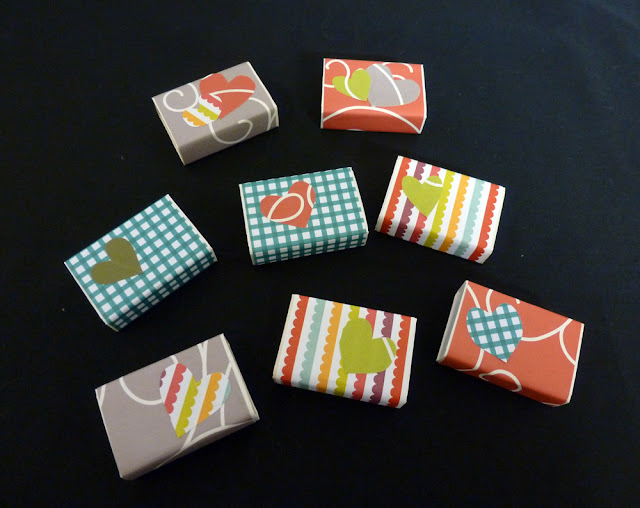 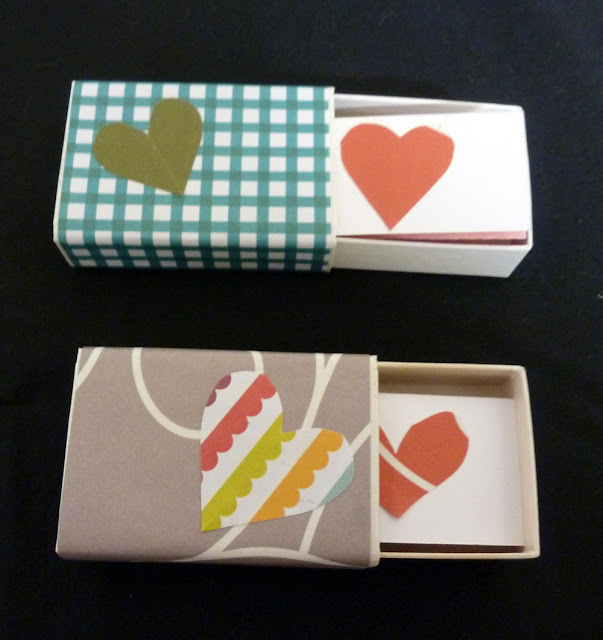 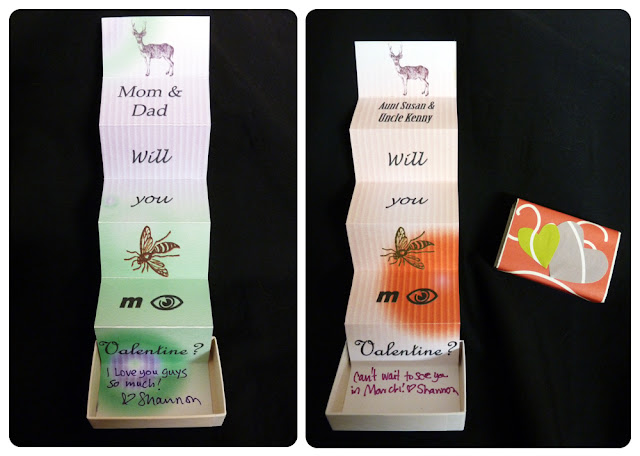 And one more happy thing-  My 2013 valentine's block from my mom!  She's making us (my sister and me) one every year, and someday we'll put them into a quilt.  This years features gradients (from photoshop) and embroideries from her embroidery machine.  So fun since both of those are things she's been working with a lot lately. 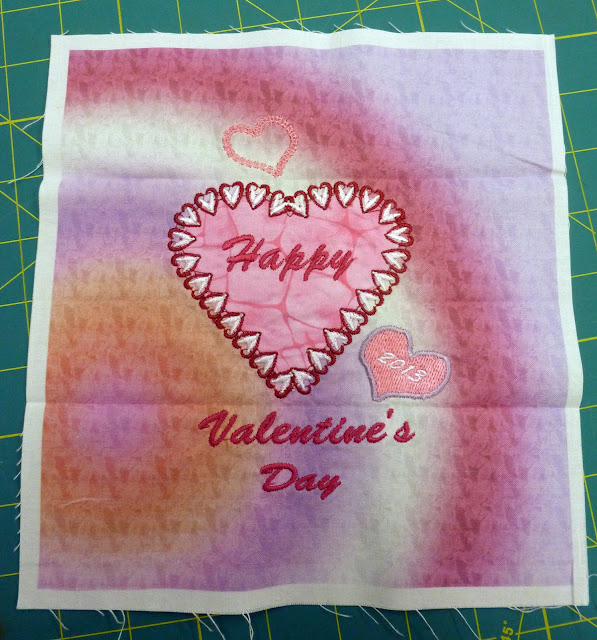 Happy {early} Valentine's Day everybody!  I don't go in much for the romantic side of the day, but love an excuse for fun crafty goodness.  I'd seen the LOVE mini quilt around for a long time, and when Jennifer over at Knotted Thread posted hers a few weeks back, I decided the time was ripe to whip up a few of my own. I used the pattern from Kelly over at Sew Mama Sew, only instead of making each letter the size of an 8.5 x 11 piece of paper, I printed two letters to a page, so they're each about 5.5" x 7".  I also decided to put them all in a row instead of a rectangle.  I made one for me, one for my mom, and one for Becky.  They're the perfect size for a small wall hanging or table topper.  Fun little Valentine's day presents don't you think? 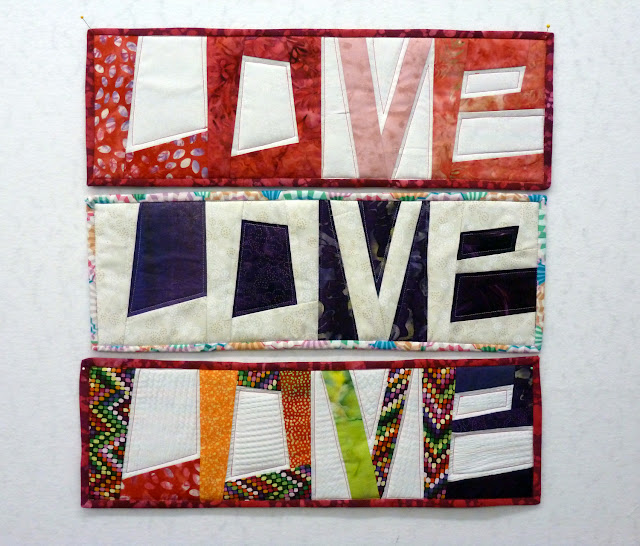 Progress on the Quiet Book

Things have been fairly busy here on the non-quilty front lately so I haven't been getting as much done as I'd like, but Becky and Anna came up this past weekend and I wanted to share a project we worked on together.

First, I have to say, Anna is so adorable!  She walks and runs all over the place like a pro, bending over to retrieve things from the floor or stack them up.  If you balance something on your head (like a stuffed toy), she'll walk over to you and lean over and grab it off- usually with a great big grin or giggle.  It was so special to spend time with them and I can't wait to see them in March.

Anyway, a long time ago (before Anna was even born), Becky and I started working on a quiet book.  We had one as kids that my mom made us, and we wanted to make one for Anna.  She's old enough now to enjoy some of the simpler pages, and of course anything she can put in her mouth (like a fabric book) is great fun.

Here's what we got done over the weekend! I hope Anna enjoys it. 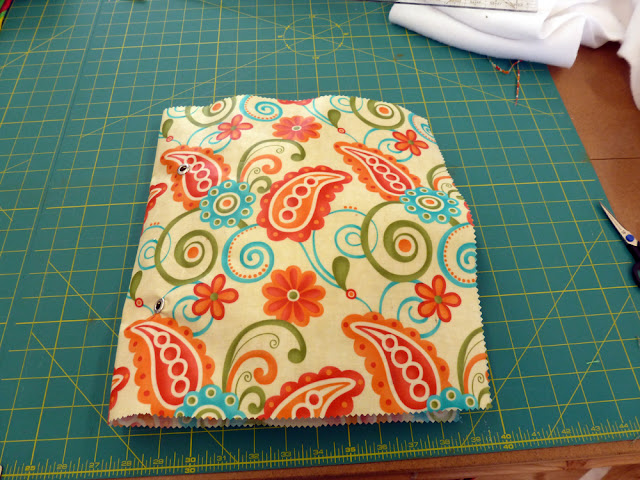 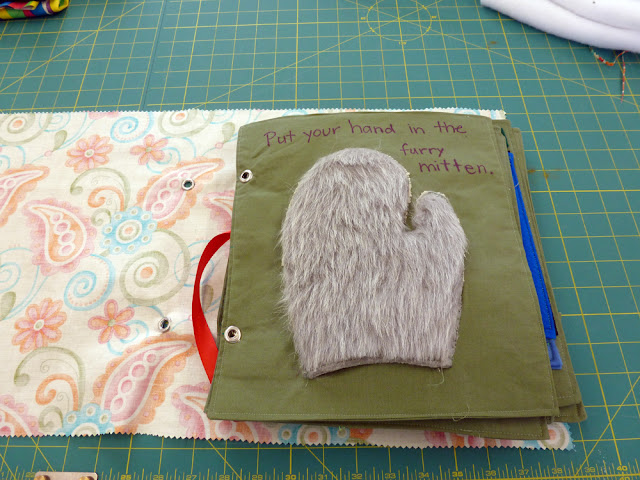 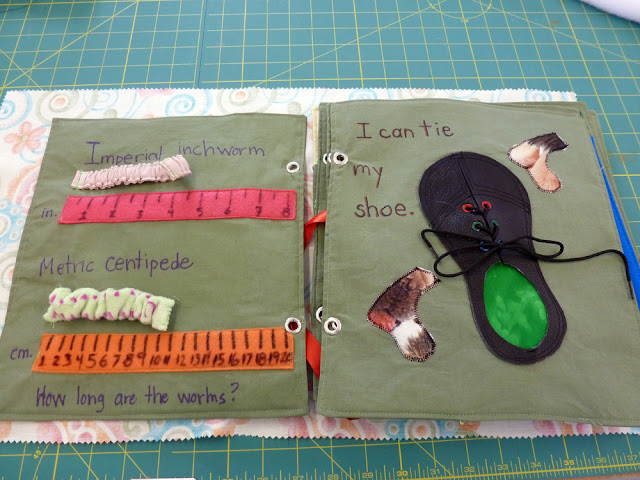 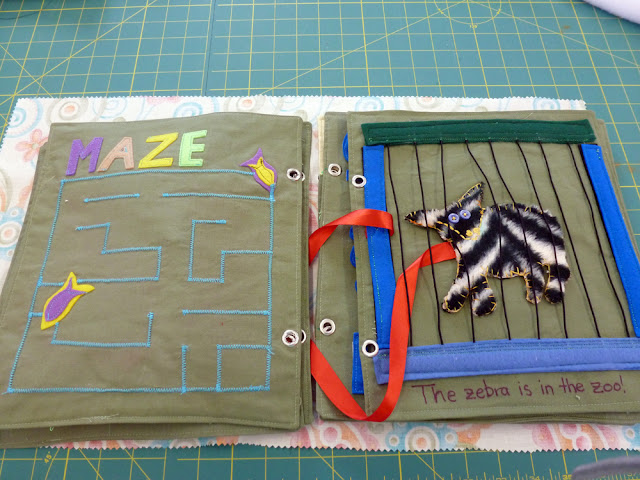 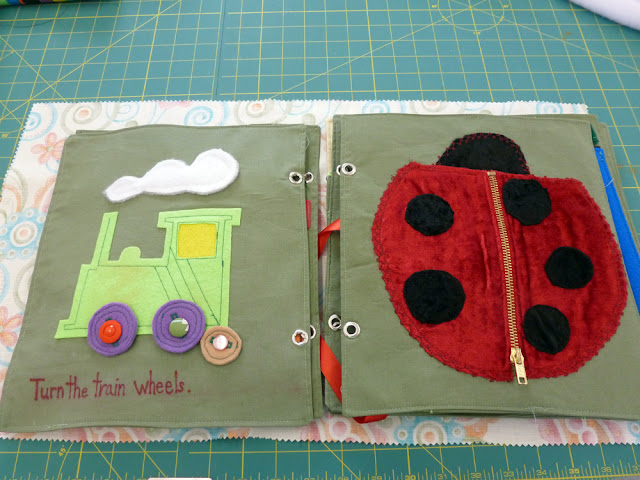 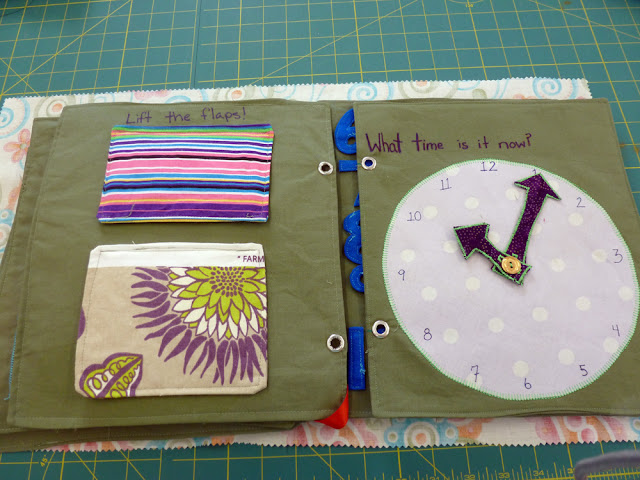 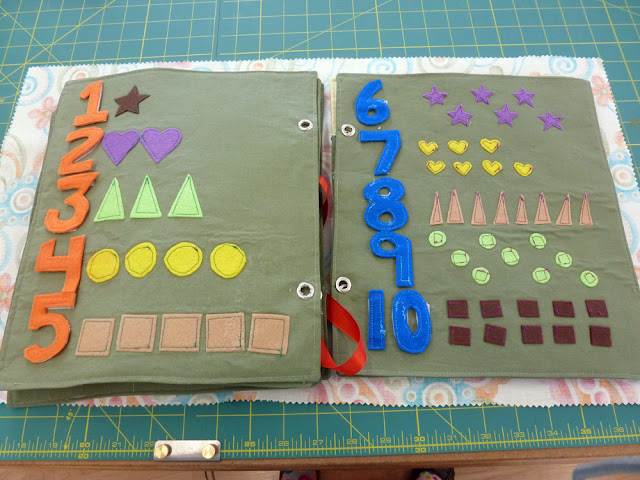 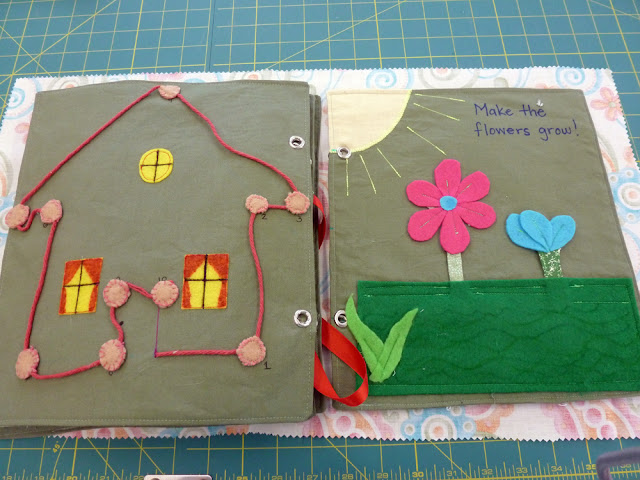 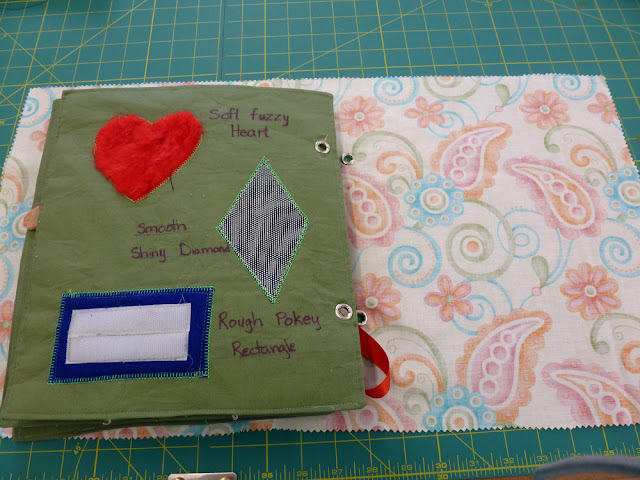