Progress on the new mandala

Lately I've been busy working on my new mandala quilt and it's been really wonderful to make some good progress.  I started this project back in the summer (blogged here) but haven't had much time since August to work on it.  The first step after completing all the computer design work was to start cutting out all the animals, so that's what I've  been doing.  Unfortunately lots of the colors didn't photograph well, but you get the idea.  So far it's going well, but the hard part is getting the overlays cut and lined up, and I haven't started those yet.

So IQF Houston always seems to fall over Halloween and last year you may remember that my mom and I dressed up as Snow White and Grumpy at the quilt show.  We aren't dressing up at the quilt show this year but some good friends of mine dressed up as Bajorans and hosted a party called Deep Spook Nine: Keeping up with the Cardassians.  With a clever title like that, I couldn't be anything but a Starfleet officer.  My favorite iteration has always been The Next Generation (swoon Patrick Stewart).  Given how terrible I look in a jumpsuit, I elected to make a version of Troi's skant uniform.  Given it's shortness I'm opting for the look with leggings.

Not perfect, but I think it definitely reads as "Starfleet" and it's certainly a pretty comfy costume! 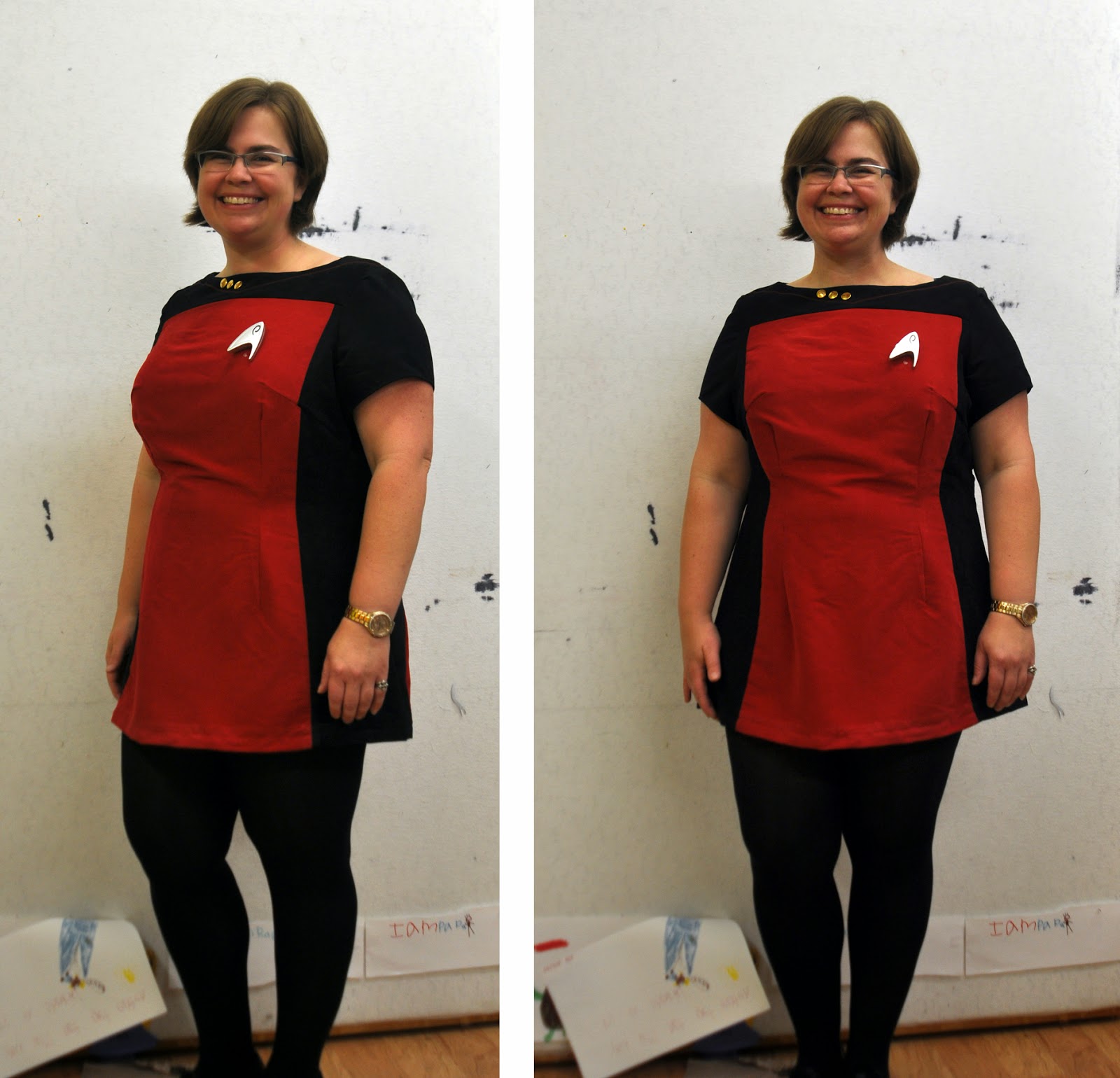 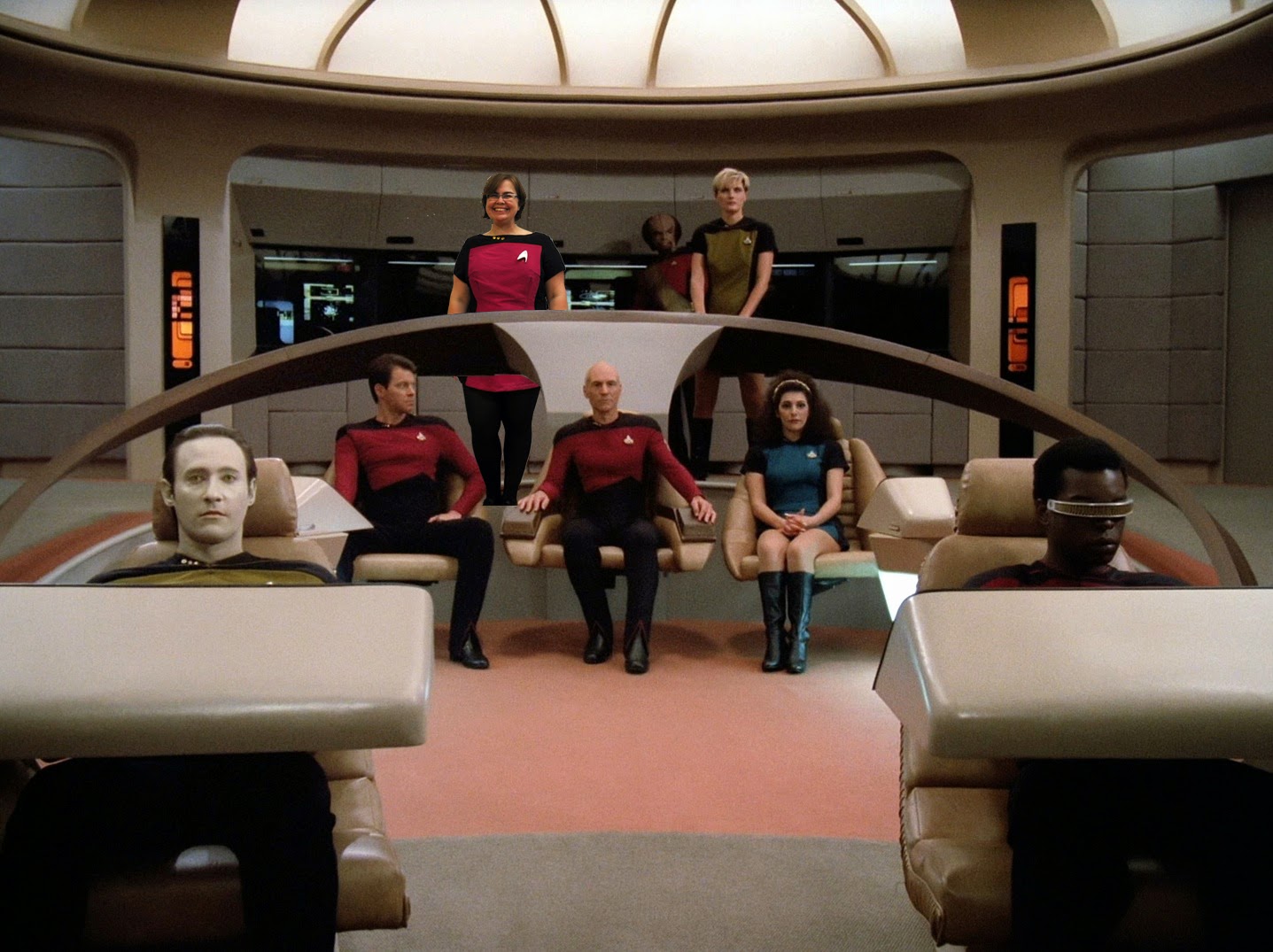 I blend pretty well apart from the silly grin.

And here are a few of us at the party, loosely representing TNG, DS9, and TOS.  Too bad I look ridiculous with my eyes closed. 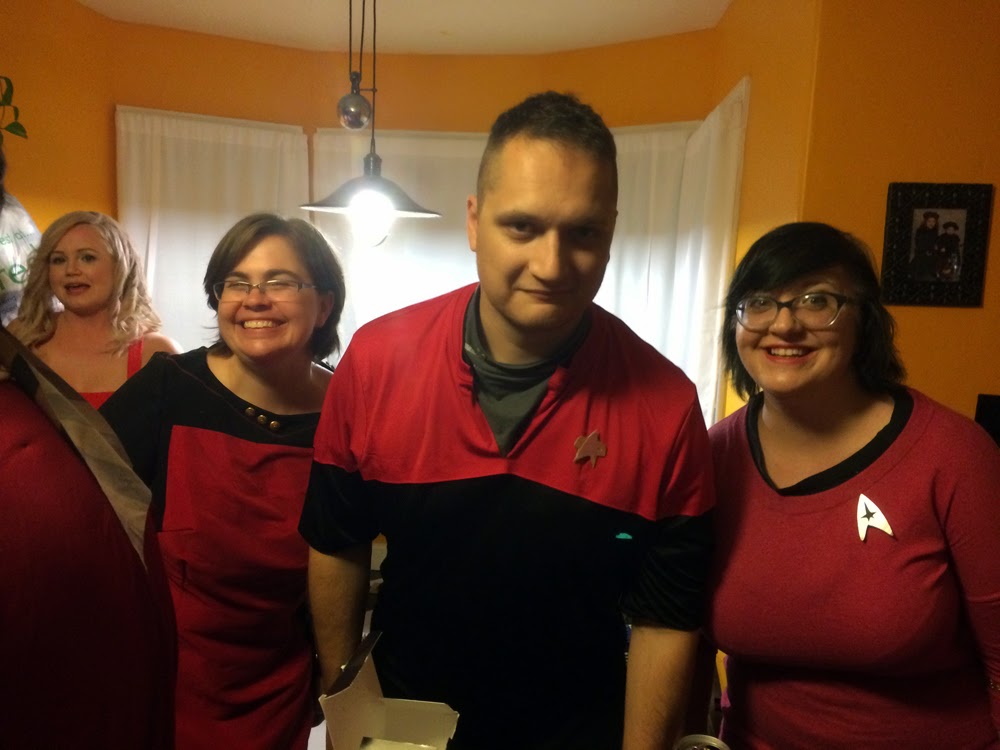 Happy Halloween everybody!  I hope you have a great time!
Posted by Shannon at 8:00 AM 4 comments:

Email ThisBlogThis!Share to TwitterShare to FacebookShare to Pinterest
Labels: Halloween

This is the second of my two entries into this fall's Blogger's Quilt Festival.  Three cheers to Amy and many thanks for hosting, it's always so much fun to see what everyone has been working on.

My first entry was the cuttlefish, which is in the mini-quilt category.

This is my beloved photoreceptor quilt which I'm putting in the ROYGBIV category.  I thought about putting it in the Art quilt category, but its rainbow color scheme combined with the subject matter (without photoreceptors we wouldn't even be able to see our favorite rainbow colors) tipped the scales to this category.

Some of you may know this already, but in my non-art life I'm a photoreceptor cell biologist and here, I've jumped straight into linked-to-my-scientific-work territory with a quilt featuring photoreceptors.

The quilt was based on an electron micrograph taken by my quilty crafty friend Barb, who is a fabulous microscopist.  Photoreceptors are the cells in the very back of your retina which are actually responsible for sensing light and converting it into the chemical/electrical signals that are eventually processed by the brain and register as vision.  They have quite different ultrastructure from other cells, characterized most obviously by a giant long extension from the cell body.  This is called an outer segment and is filled with stacked membranous discs (like a stack of flattened whoopie cushions or something).  These discs are packed with all the proteins necessary for sensing light.  All the photoreceptors in this picture (which came from a mouse retina) are rod photoreceptors which mediate peripheral and low light vision.

Photoreceptors really are the first step in determining how we see the world, thus the name for the quilt, "Do You See What I See" (for me the answer is almost always bright rainbows of color...)

The quilt features lots of machine quilting, hand embroidery and beading, and bobbin quilting using a fabulous hand sun rainbow yarn I picked up in Germany a couple years back. 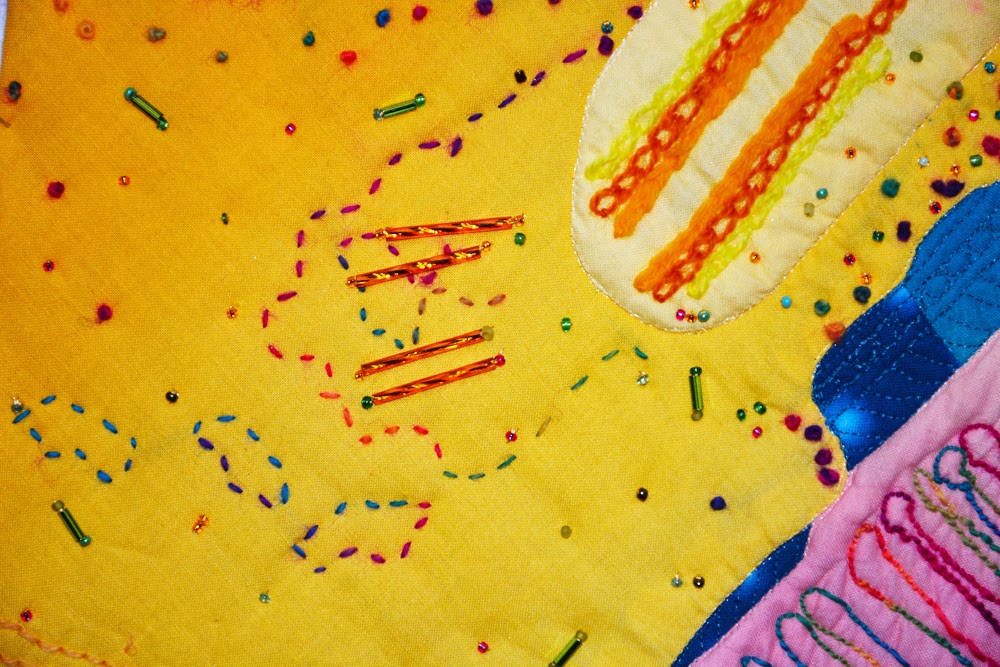 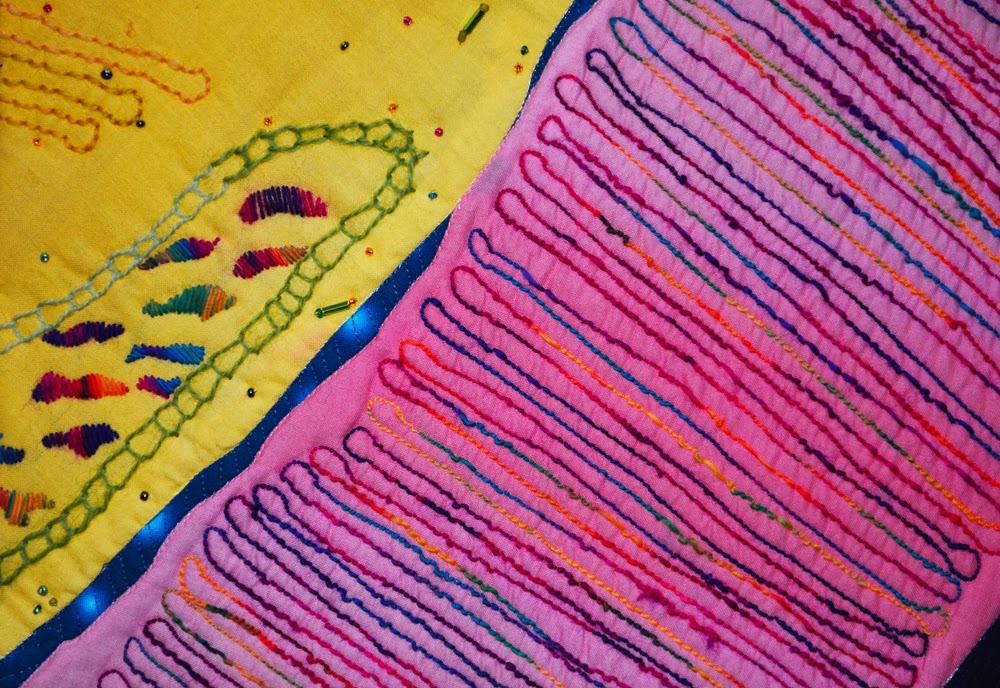 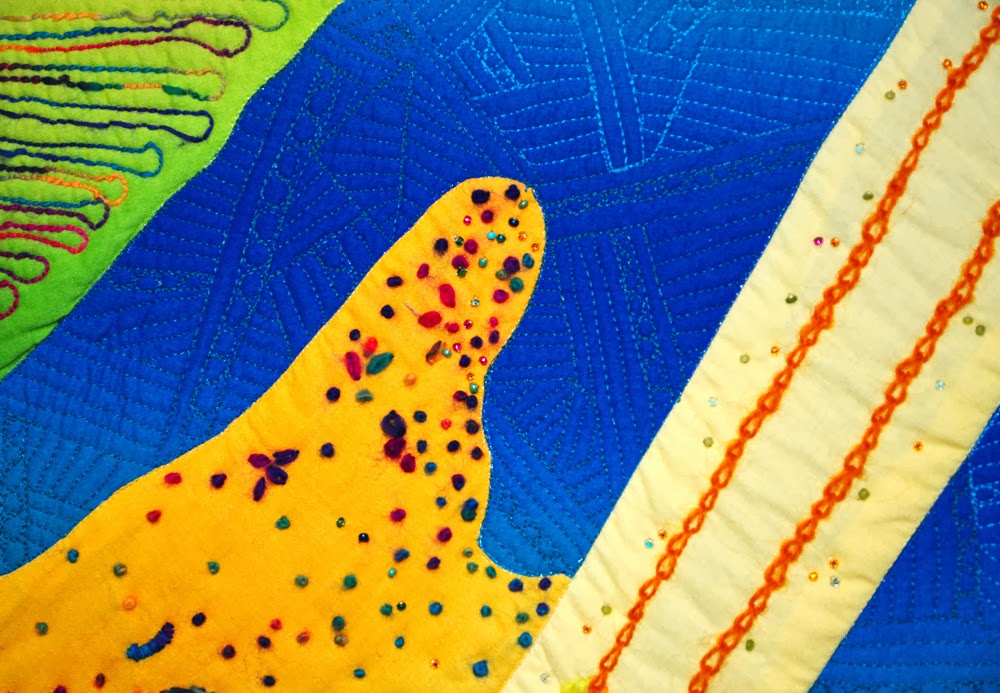 Thanks again to Amy for hosting the Blogger's Quilt Festival, and everyone say a silent thank you to his or her photoreceptors; without them you wouldn't see anything!

It's that time of year again- the time of year when you can mention Houston and quilters immediately think of Market and IQF, and when bloggers gear up for the Bloggers Quilt Festival!  I love participating and looking at everyone's fabulous quilts and I'm super grateful to Amy for continuing to host it!

This is my entry in the mini-quilt category, you can see all the other entries in that category here, and the voting starts November 1.

My second entry (the photoreceptor quilt) is in the ROYGBIV category, so check it out too.

I made this quilt in April to donate to the annual SAQA auction.  SAQA, the Studio Art Quilts Associates is a really fabulous organization for any art quilter or even someone interested in art quilting.


It started because I'd been thinking about the idea of cutwork embroidery and negative space, and how that could be used in quilting in a very free-form way.  To try it out, I made a quilt sandwich in which all three layers were synthetic (i.e. backing and front polyester and polyester batting), then traced a cuttlefish from a picture I took at the Monterey aquarium a few years back.  I free motion stitched the fish outline with cotton thread, then used my woodburning tool to cut through all three layers just inside the outline.

It worked great, the woodburning tool cut right up to the edge of the cotton thread (which doesn't burn as easily) and sealed all three layers so there were no frayed edges or loose batting. 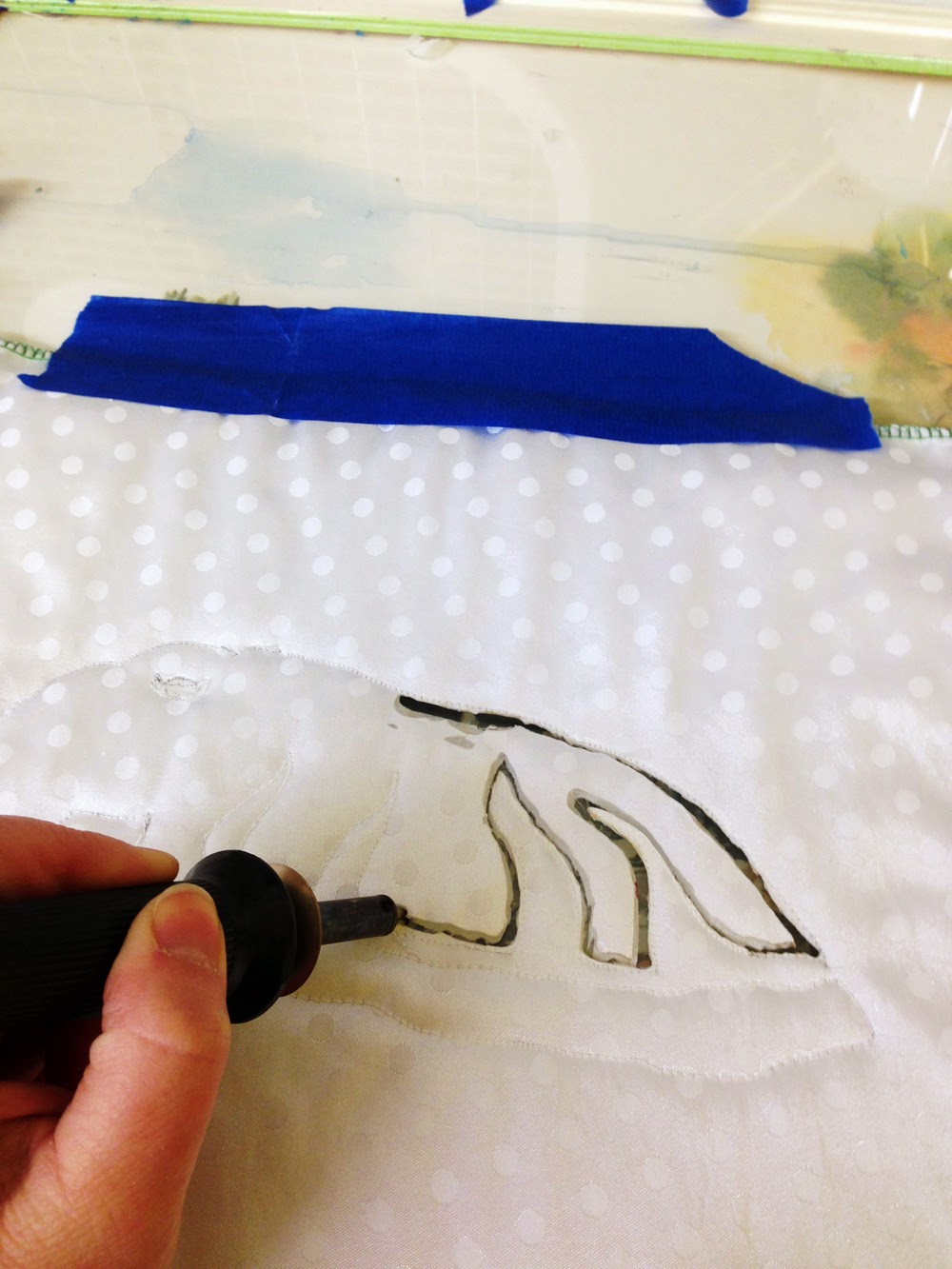 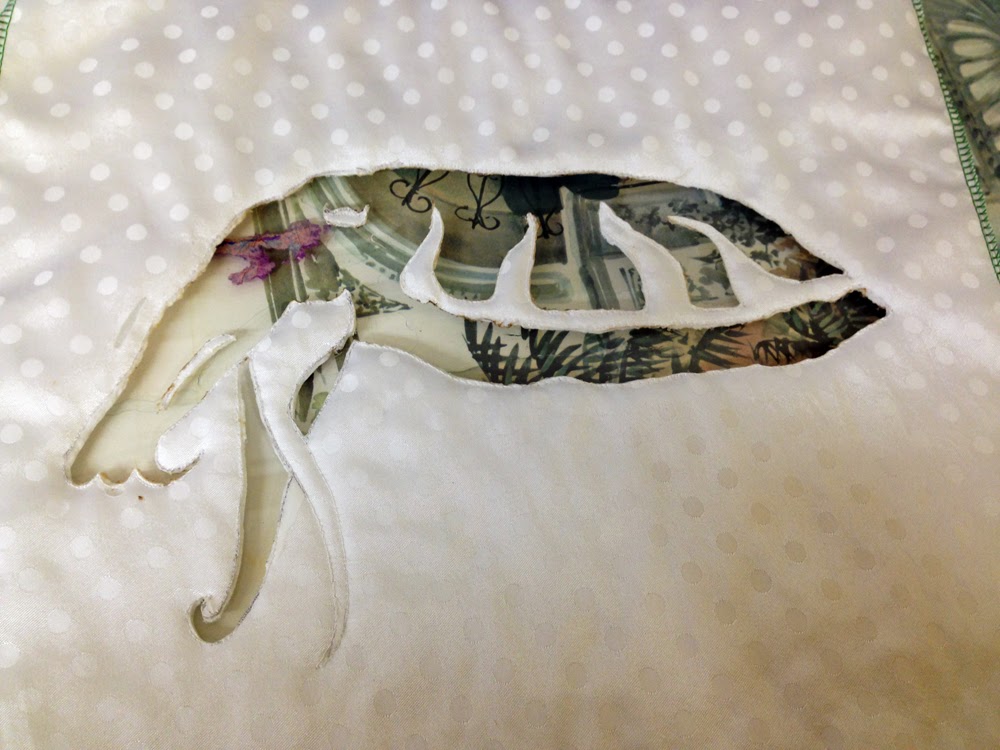 After cutting out the fish, I put two layers of water soluble stabilizer under the open areas and just started thread painting. 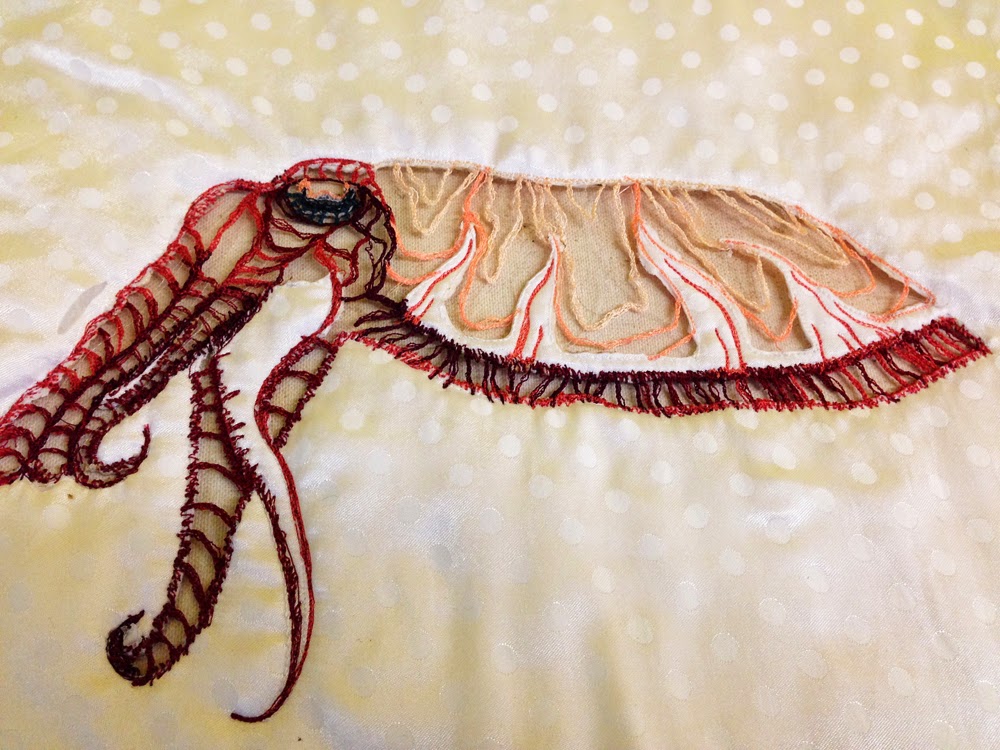 Then I saw this on Judy Simmons blog.  She has a great step-by-step tutorial so I encourage you to check it out. She describes a technique where you can transfer from a transparency to fabric. Basically, you print out your picture on the transparency, then paint your fabric with gel medium wherever you want the picture to transfer, then put the transparency (ink side down) on the fabric and rub all over it.    I tried it and it worked great!  you can see below, I did not paint over the fish part, so no ink transferred there, but it transferred really nicely everywhere else.  It's a bit mottled looking and soft-edged; you wouldn't want to use this technique for crisp printing, but for an underwater scene I thought it turned out nicely. 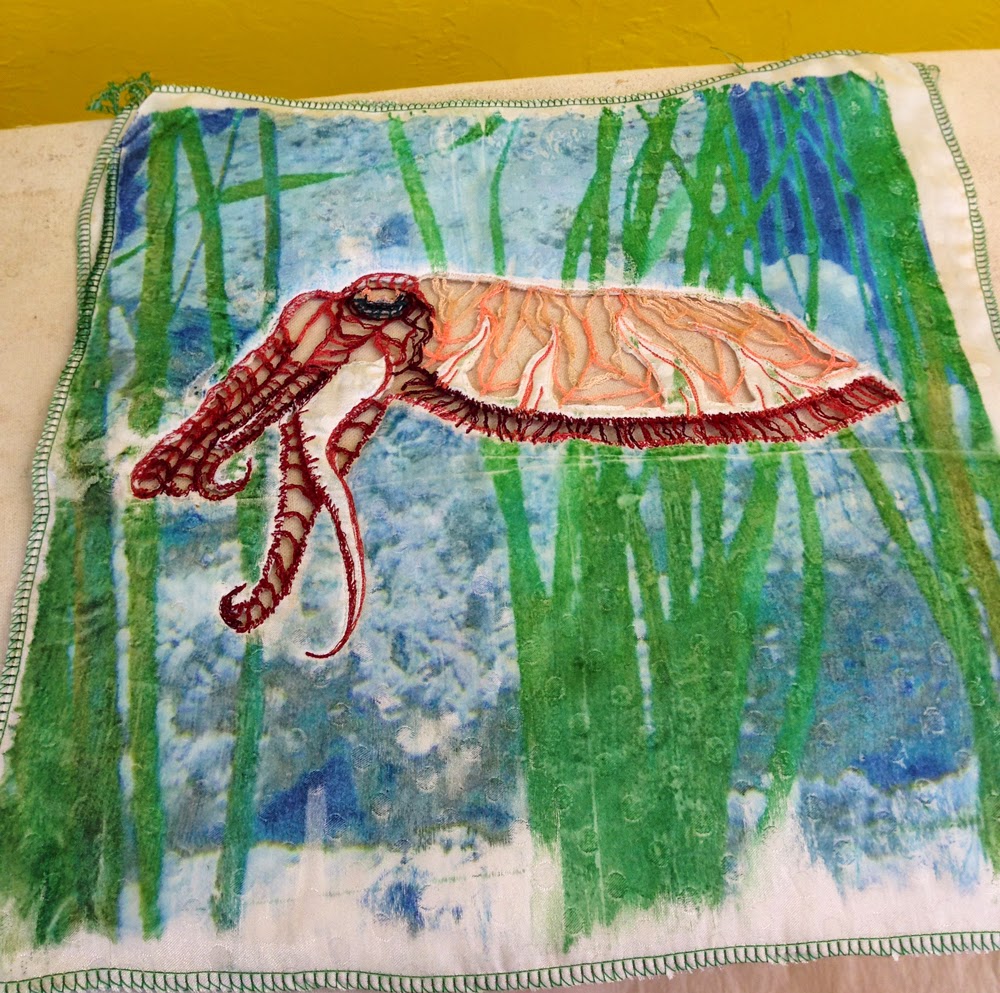 Then I just used about six different green fabrics (mostly polyesters, silks, and velvets) to layer leaves on top, and then quilted away.  I love that you can see the green printed leaves peeking out a bit from behind.  I think they add some nice dimension. 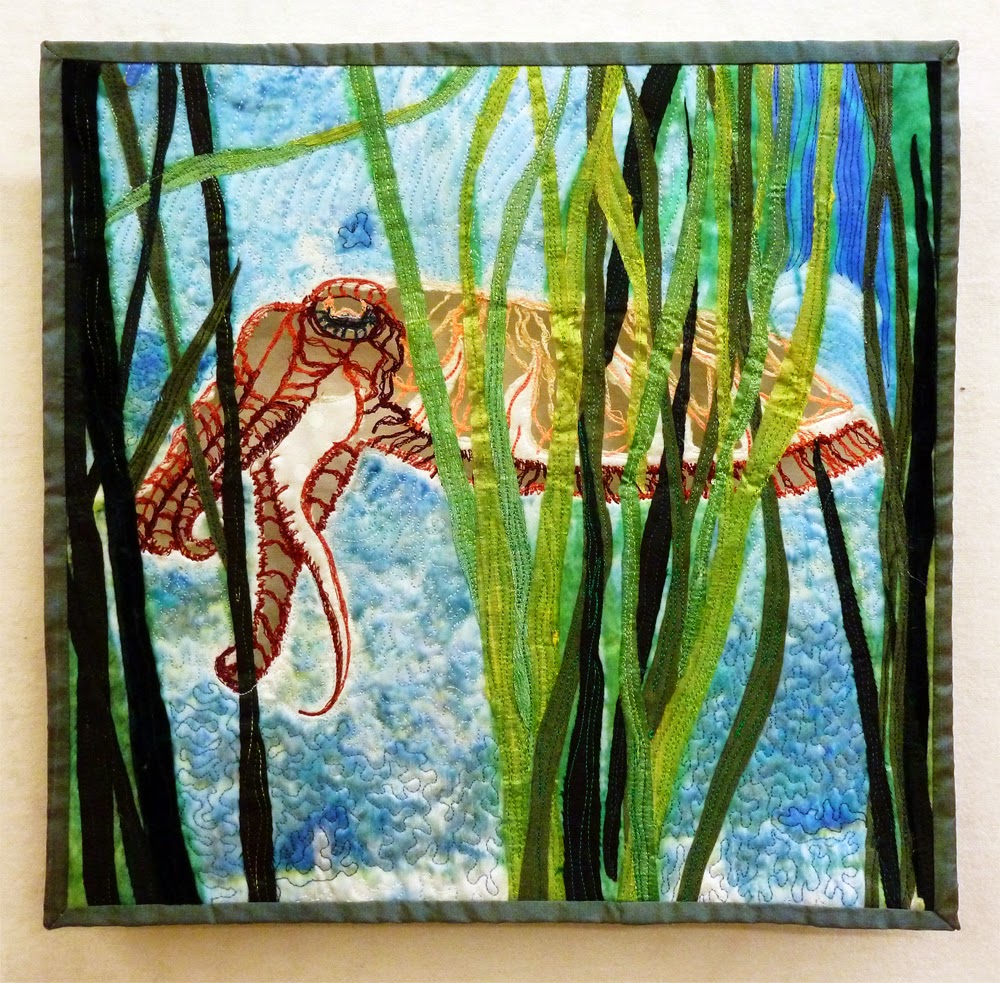 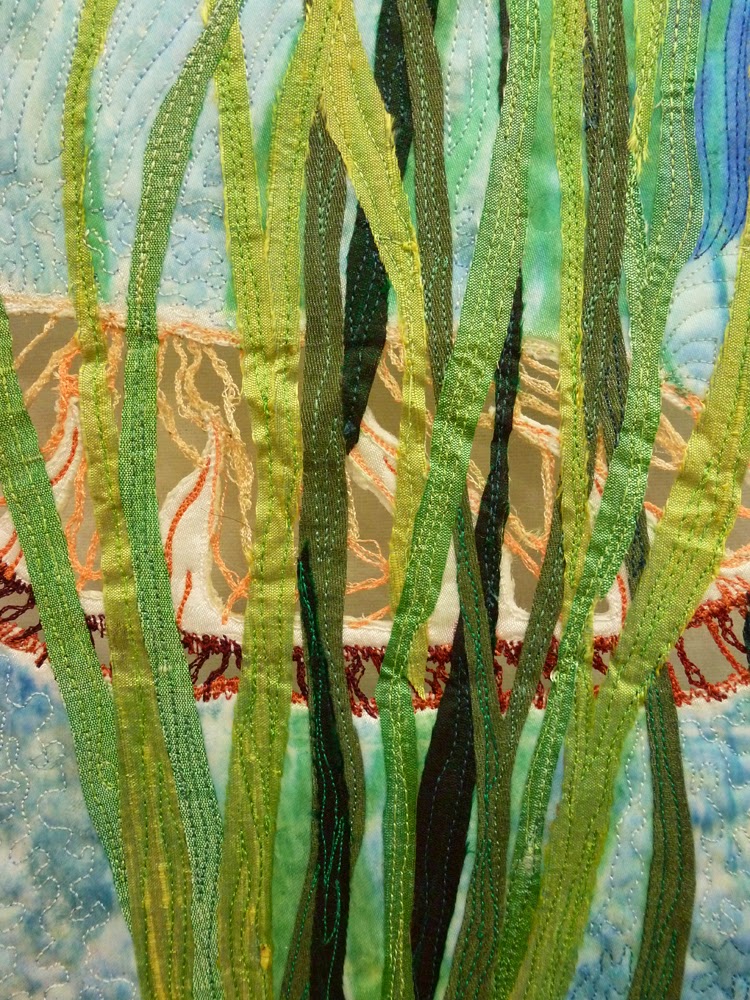 I really enjoyed working on this- I love fish and underwater scenes and it was fun to try so many different techniques.  I'm enamored with the way the open portions catch the light and shadows when the piece and provide a feel of transparency.  I'm super glad it could raise a little money for such a wonderful organization!

If you clicked over from the Bloggers Quilt Festival, I hope you'll come back again to see more of my work!  Thanks again to Amy for hosting!
Posted by Shannon at 10:02 AM 8 comments:

Once again Pokey Bolton and the IQF folks in Houston are collecting 4 x 6 pet postcards to raise money for Friends for Life, a no kill animal shelter in Houston.  Apparently in the last two years they've raised over $60,000 (!!) to donate by selling the postcards at IQF for $20 each.  I made some last year, and thought I'd make some more this year (especially as its the last year for it).

If you want to participate you just make them and mail them in, super easy and there's still time left. As always, I featured a few of our many family pets.  When I told my mom which ones I picked she asked why I selected those (and not others) and the simple answer was because those were the ones with good pictures on my phone the day I decided to do the photoshopping!

As always, my message is adopt, and each of ours get a fitting message to match his or her personality: 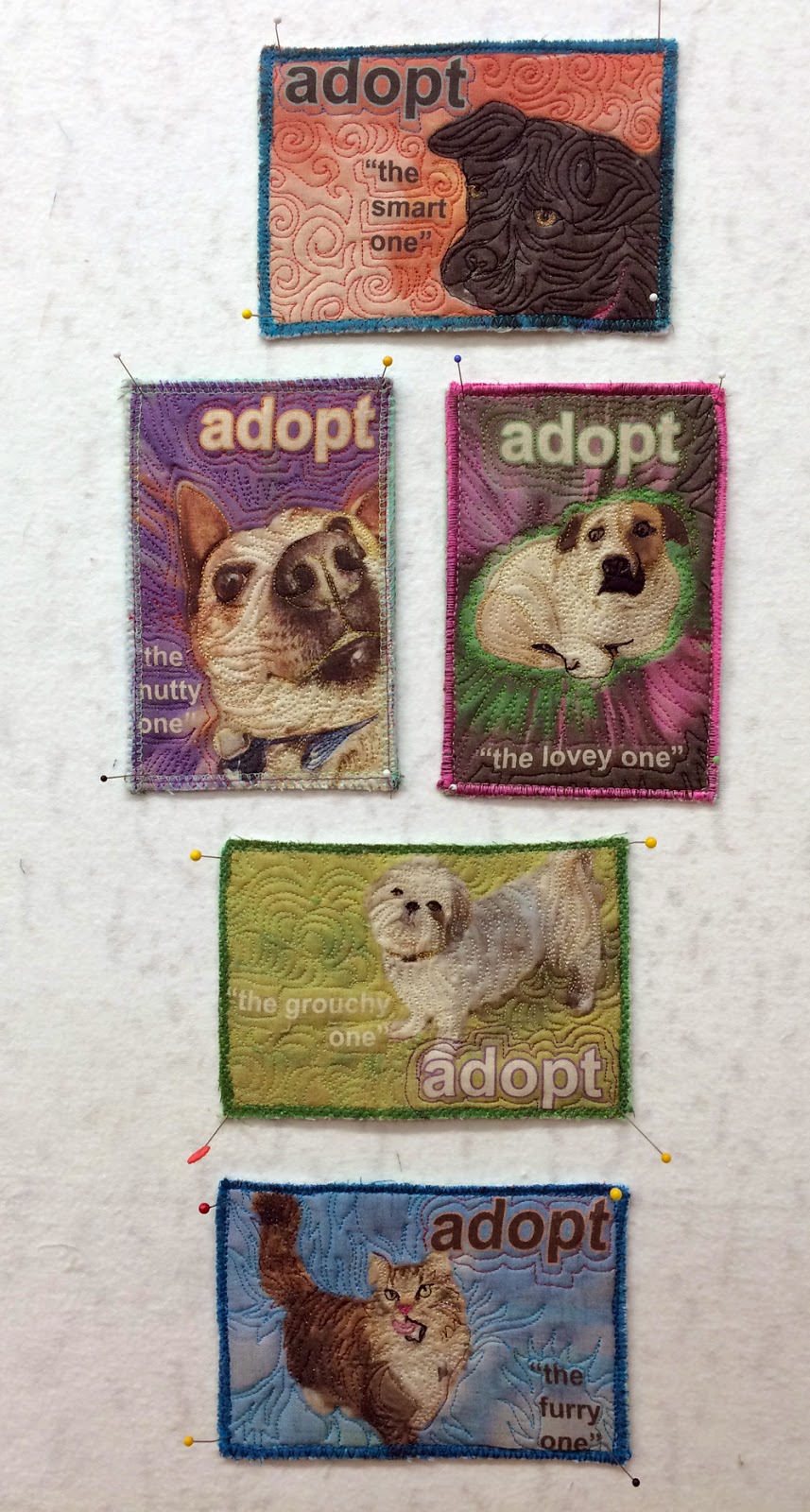 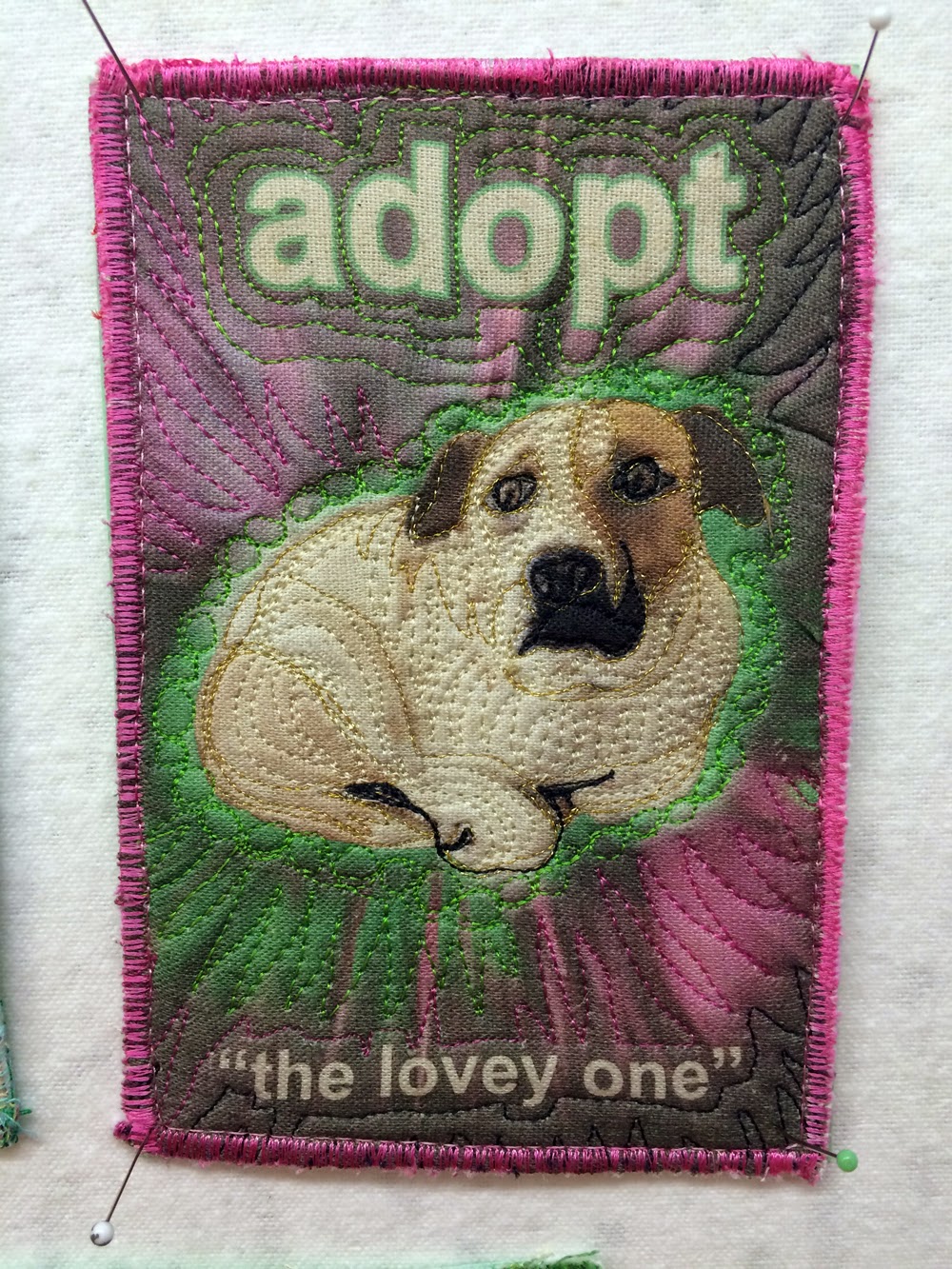 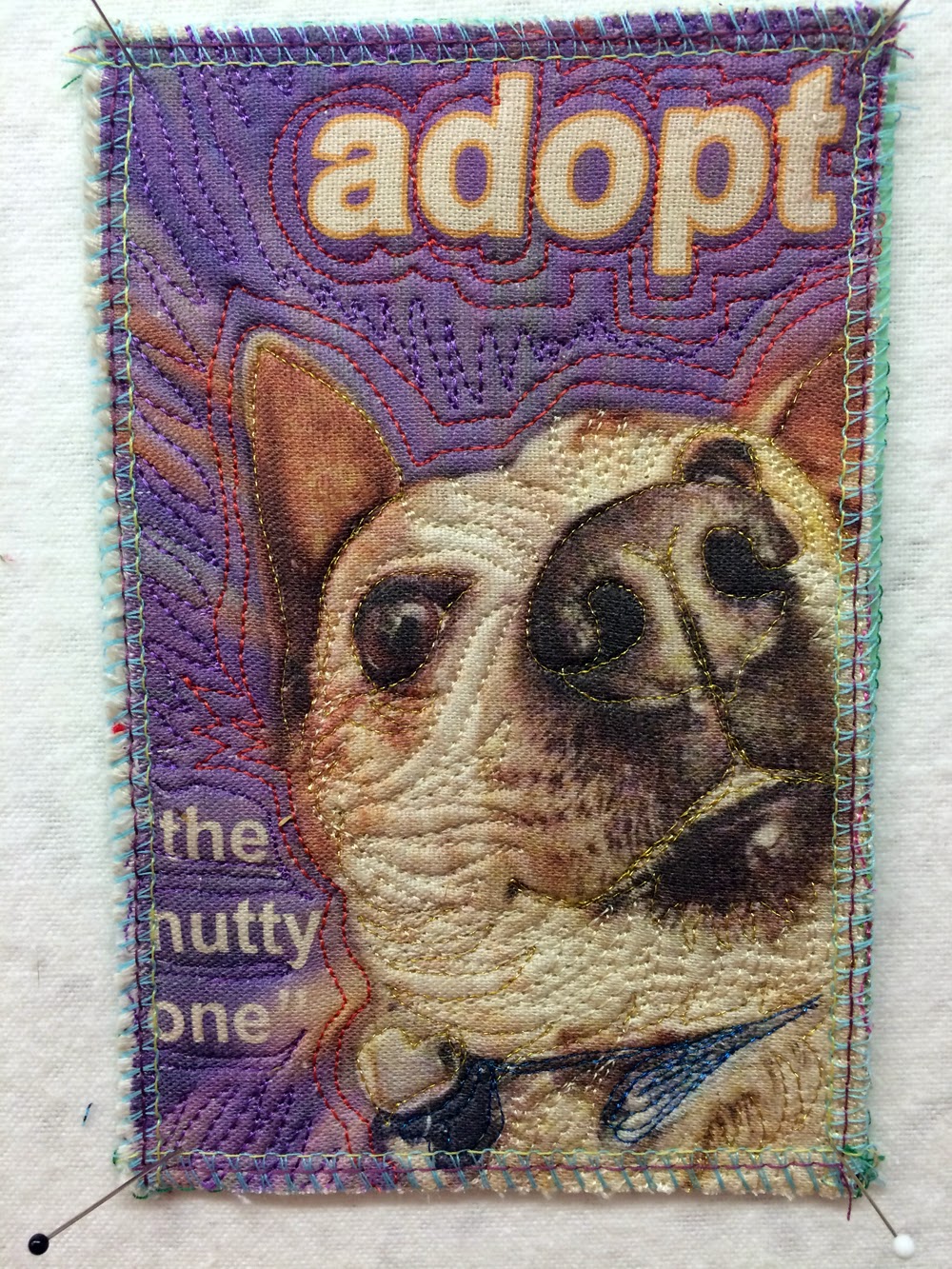 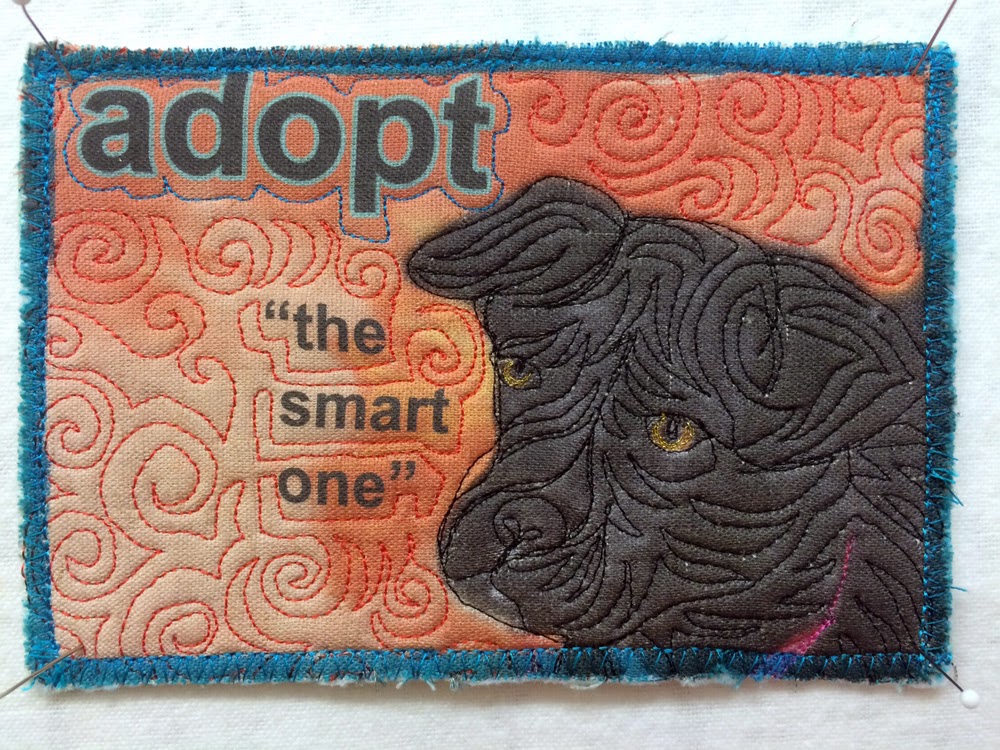 Gibby (who actually lives with my mom and dad) who is not 1600-on-the-SATs-smart, but I-have-trained-my-people-to-do-exactly-what-I-want-smart. 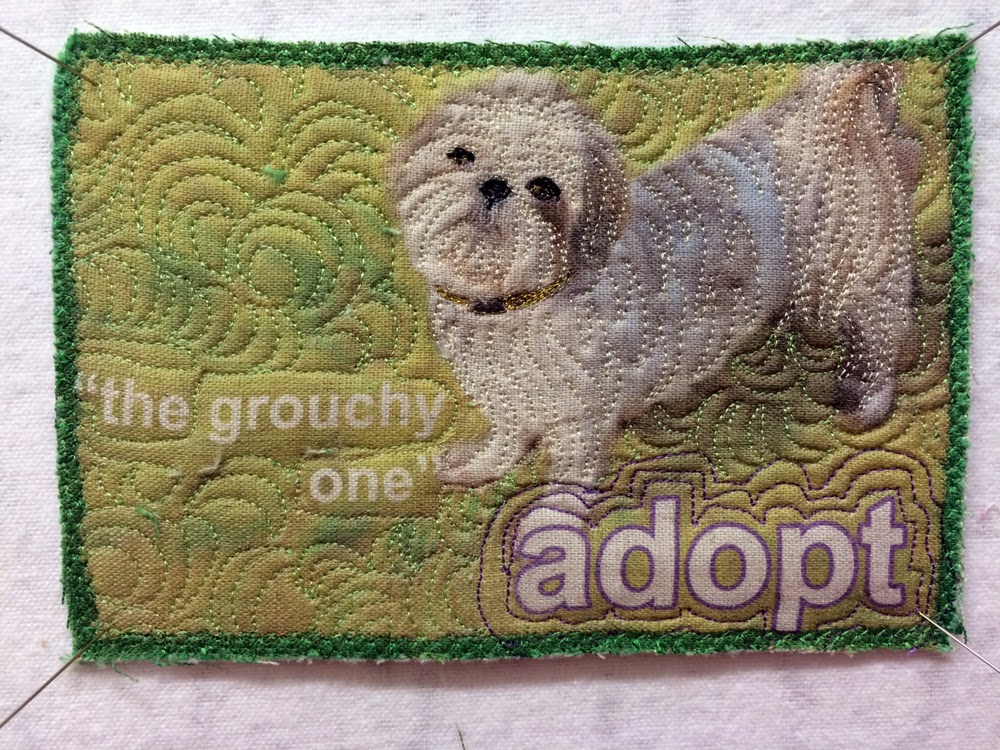 Missy, whose defining personality trait is grouchiness yet you can't help loving her. 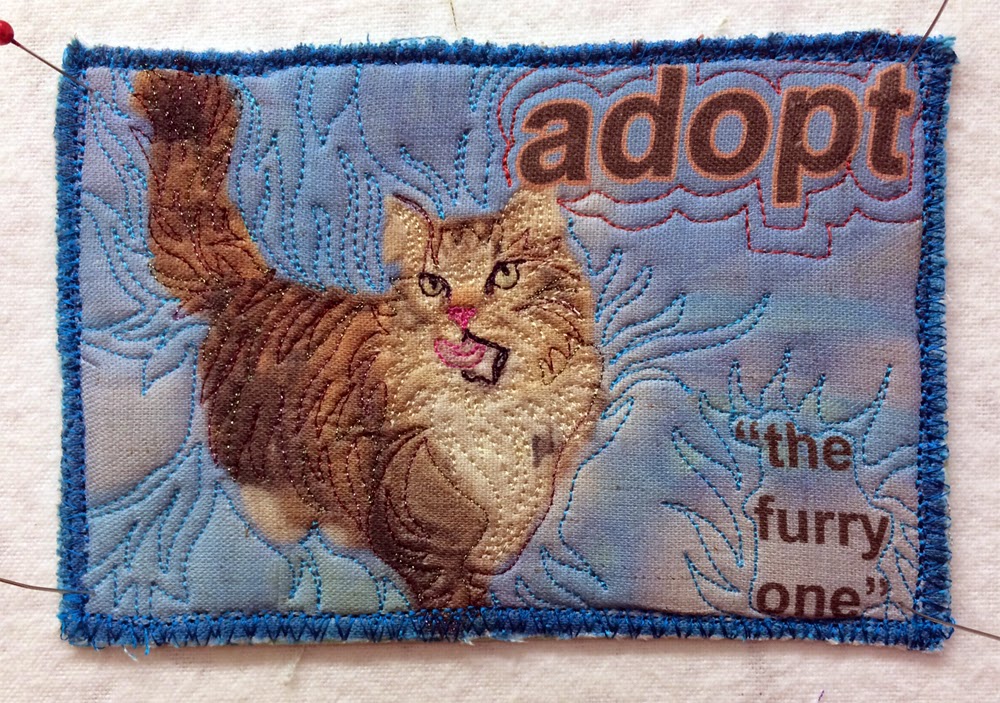 And the Samcat who is gone now, but really made you understand how "furry" could be a personality trait (here let me rub on you lovingly,  you don't have enough fur up your nose, in your mouth, stuck in your eyelashes, in your bed or on your clothes....)

I printed on different fabric than I usually do and am not really crazy about how it turned out, but it was fun as usual, and always best to test on a small project like this.

Also, in unrelated news, I'm super excited to say I had a piece accepted into Quilt National 2015.  The show doesn't open till next May, but hopefully some of you will get to see it if the show comes near you!