Someday this space will be filled with more arty goodness and tales of my quilts, but for know just another week of things to like.

Last Thursday night I actually remembered to go to the monthly Fiber Artists of Oklahoma meeting.  The guest was young local kirigami artist and painter Malcom Zachariah (@lakshwadeep on instagram).  He brought some of his small pieces and gave a lovely talk about papercutting.  He followed up with a little demo and then we got to dive in!  He makes lots of animals, and walked us through creating some.  The top two pics are one of his abstract pieces while the bottom two are a a bird and a stegasaurus I cut during the event.  It was really fun and freeing.  Definitely check out his work. 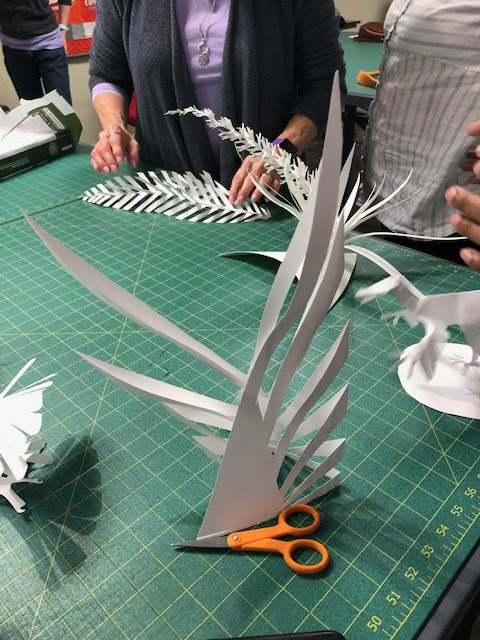 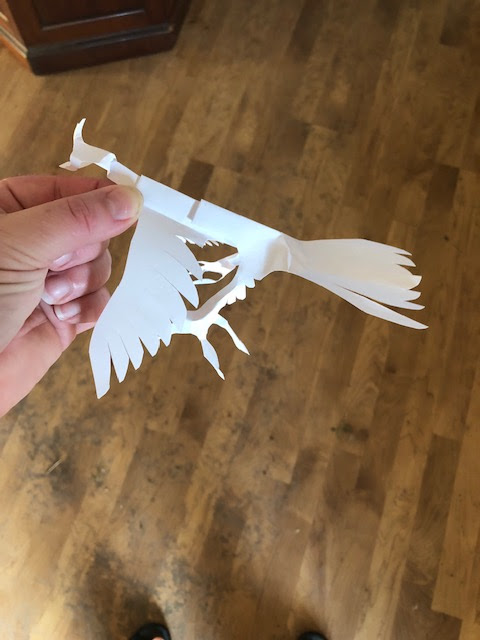 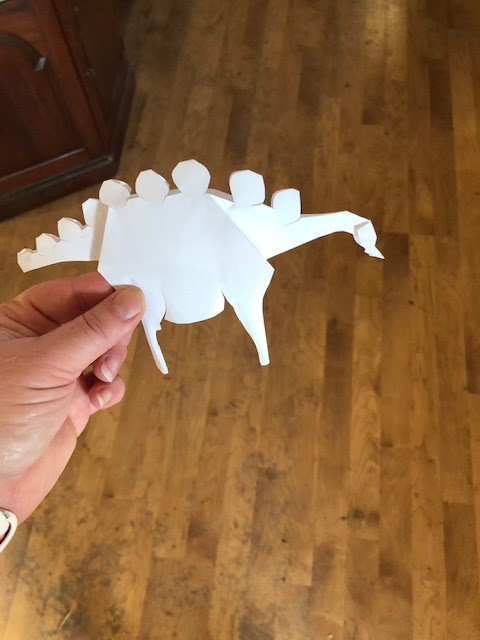 My flowers are all too little to be blooming, but one of my generic bushes has flowers on it!  I don't think I've ever seen flowers on it before (or possibly just not noticed), but I was so excited!  They're pretty and white!  I'm not sure what kind of bush this is, but it makes me happy it's blooming. 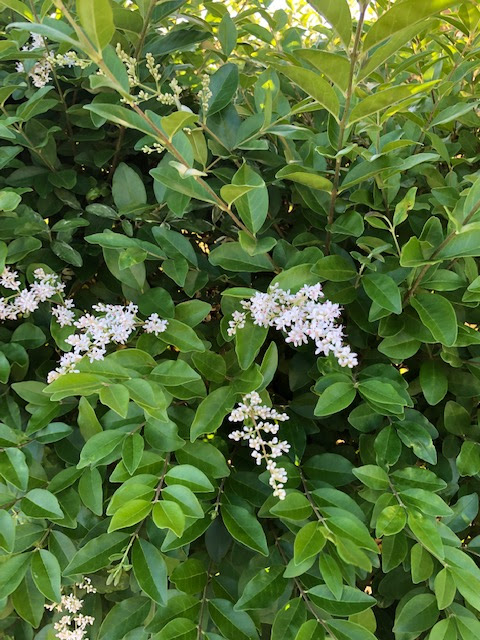 I had to take a break from my office the other day so I took a stroll around campus.  It was really a beautiful spring day, and I loved the view of the big round water feature (it's a bit hard to see but is that dark low thing in the middle).  It makes such a pleasant sound as it bubbles everywhere (even though it is a campus hot point due to costs associated with maintaining it). 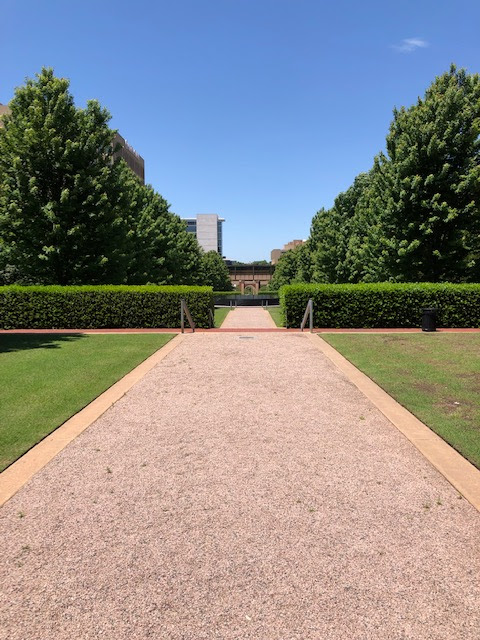 We're having the baby shower at work today for the lady whose quilt I showed last week or the week before.  I made another cake and thank goodness this time Blue didn't try any.  I was going for sheep, but I think they look a bit more like albino lions.  Oh well.  Also, I had some leftover yellow frosting I'd frozen from the last cake-- this is what happens if you accidentally over microwave while thawing.  It was this crystallized explosion.  Weird. 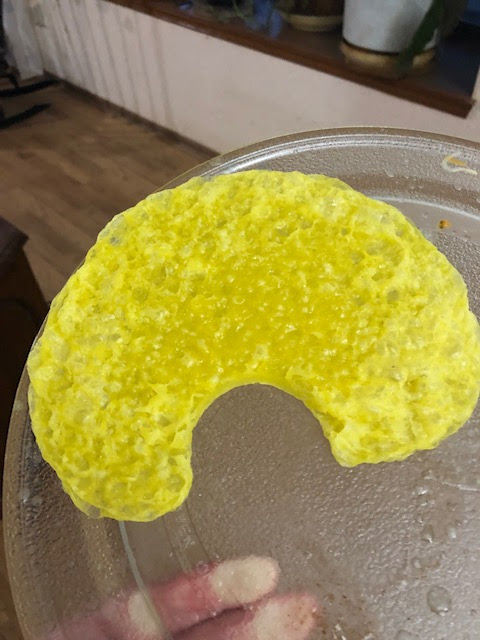 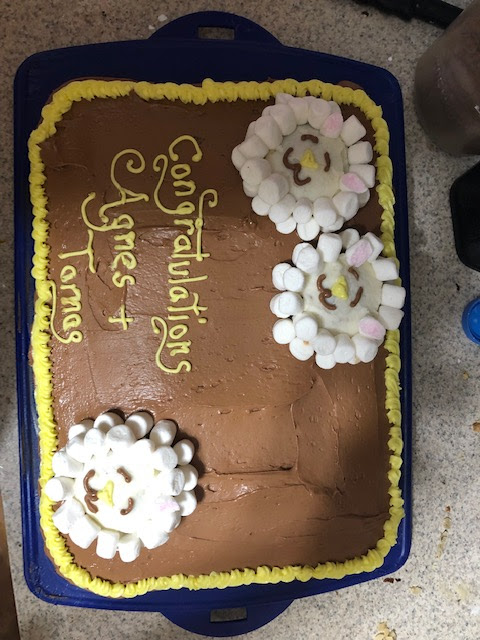 Tomorrow morning I leave on a trip to Scotland.  My nephew has discovered Flat Stanley,  a paper cut out carrier who travels the world, and he asked me if I would take a Flat Stanley on my trip.  Here she is, all neon and rainbow, ready to have her picture taken traveling throughout the highlands!  Obviously any Flat Stanley traveling with me was going to be brightly colored. Wish me luck everyone, I hope my knees don't collapse! 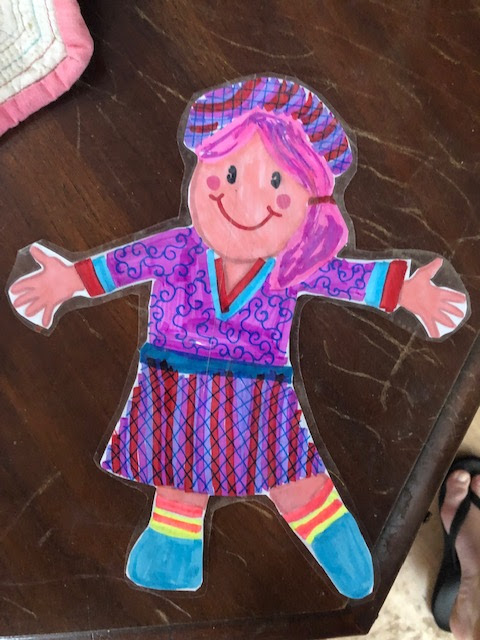 I'll most likely be out the next couple of weeks, but I'll see you guys in June.  For now, click on over to LeeAnna's for more positivity!
Posted by Shannon at 8:51 AM 7 comments:

1.  One upside to the constant rain is that everything is growing well outside (weeds included).  I'm thrilled though that my dahlias are almost all growing nicely.  Hooray!  The blackberries are also flourishing so I went ahead and put netting over them.  I've never done that before and I'm not sure how well I accomplished it, but it's better than nothing! 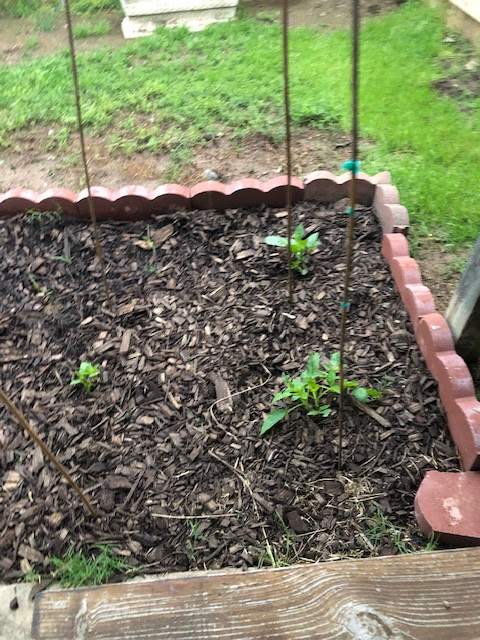 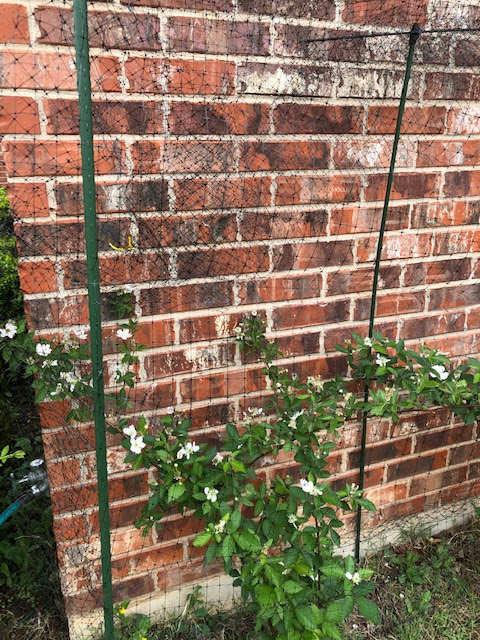 2. We had a fun potluck at work this week to celebrate some milestones here, and unfortunately while I was out of the room for just a second Blue took the opportunity to taste the cake.  Luckily (for his health and my sanity) I came back before he got anything more than a little icing.  I wiped off that part and re-frosted it, and then I made sure I ate the dog-tasted piece, but I was aggravated all the same.  Alas.  It only takes a second.  He's fine though and the cake was very tasty. 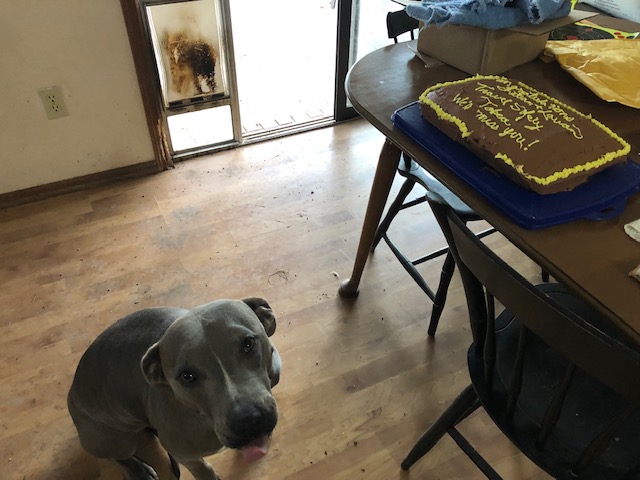 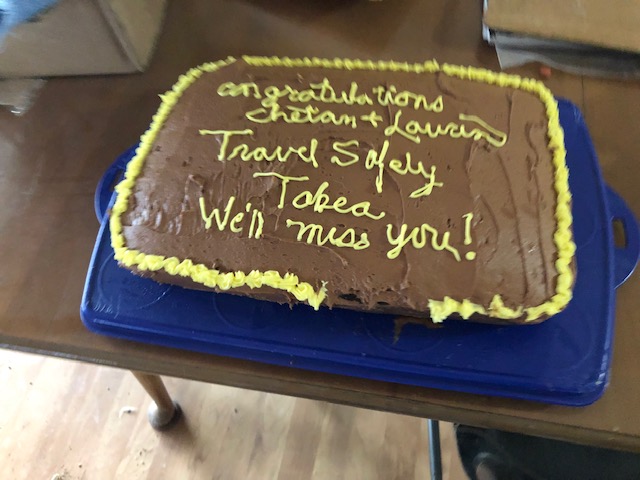 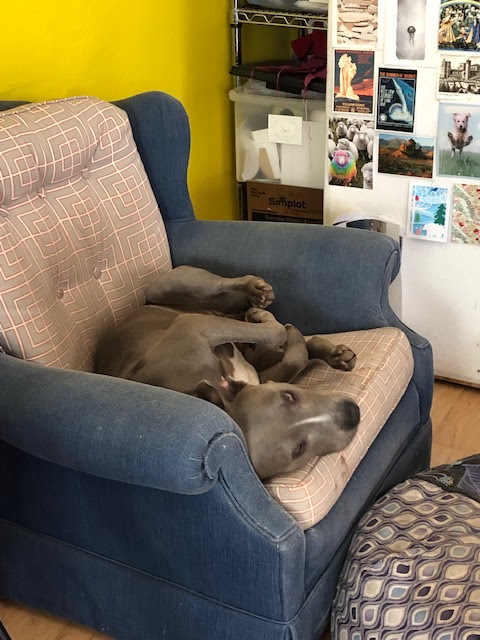 3.  We're having a baby shower for a friend from work next week so I took the opportunity this week to finish a baby quilt for her.  I think it turned out nicely.  You can see a little of my big art quilt in the background; unfortunately my design walls were all full so there was no clear place to take a picture of the baby quilt. 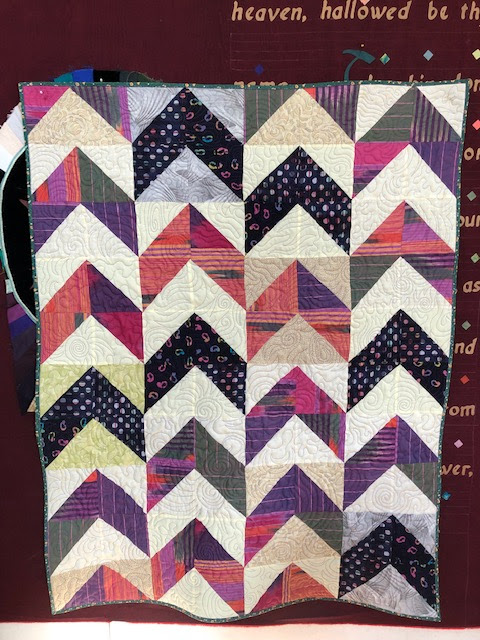 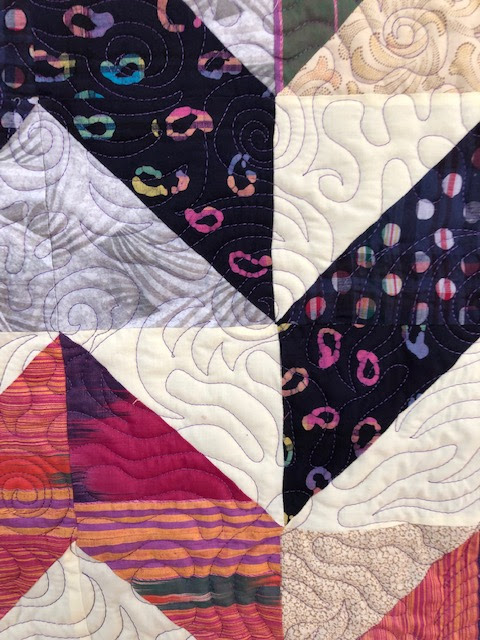 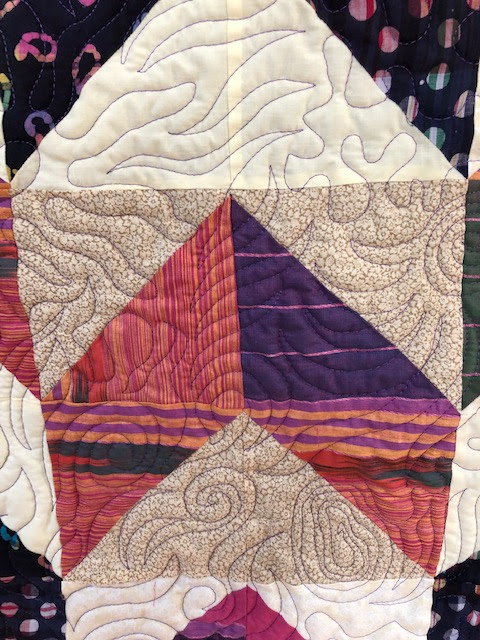 4. This weekend was citywide garage sale weekend so lots of people were having garage sales.  I don't usually go to them, mostly because I already have plenty of stuff, but while out running errands this chair caught my eye in someone's yard.  It's so fabulously 70s.  I'm not even one particularly interested in retro furniture, but it gave me a really strong pull to my Great Grandpa Cliff or my Grandma's house from when I was a really little. I couldn't resist stopping, and for only 5$ I had to snap it up.  It's in really good shape, and the velour upholstery isn't stained or damaged or anything.  It doesn't go with anything in my house, but I smile every time I look at it.  Also I think it's too small for Blue to sit in, so it should stay mud and dog hair free. 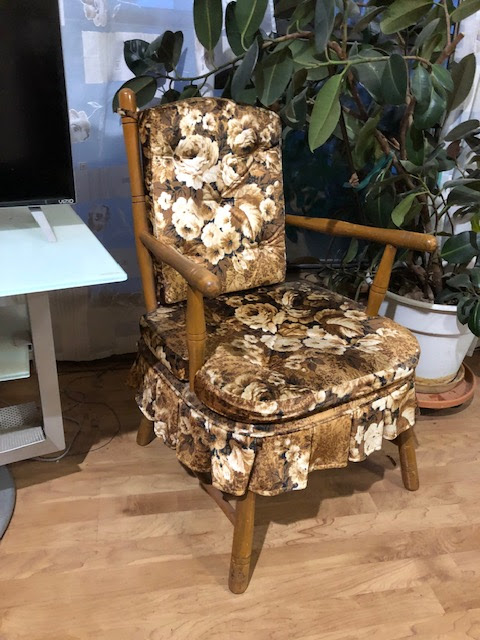 5.  Driving home from a visit to a friend on Monday this yard caught my eye.  The flamingo family watching over the gnomes made me smile. 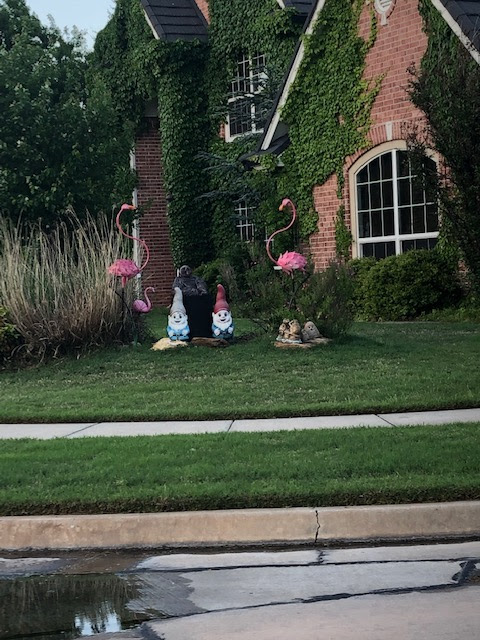 I hope everyone has a great week!  Click on over to LeeAnna's for more things to like.

1.  This weekend was the OKC Memorial Marathon.  It's a memorial for the tragic Oklahoma City Federal Building Bombing that occurred in 1995.  I was teenager then, and I remember I was staying with my grandparents because my mom and dad were on a trip.  I've never participated in the Memorial Marathon before, but this year we got together two relay teams from work.  For the relay, you have five people that run the full marathon distance, so I only had to run a 10k leg.  For me, even that was a lot, but the whole event was really fun.  There were 25,000 runners all together, and it's a really big deal here.  Next year I think my friend and sister and I are all going to run the half, which is only a little more than two 10ks. The marathon starts right outside the bombing memorial downtown and is very moving. 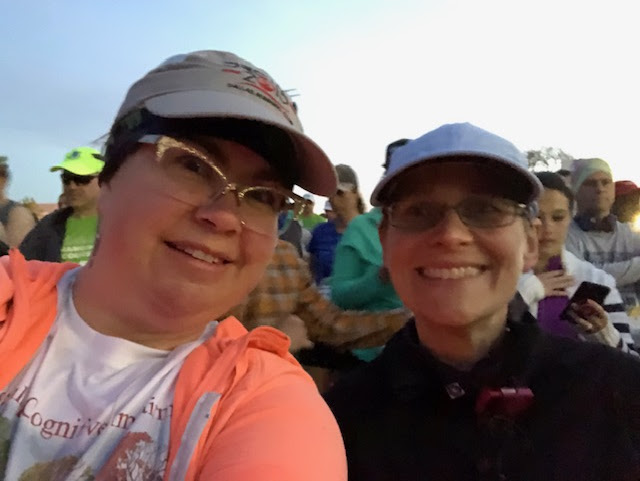 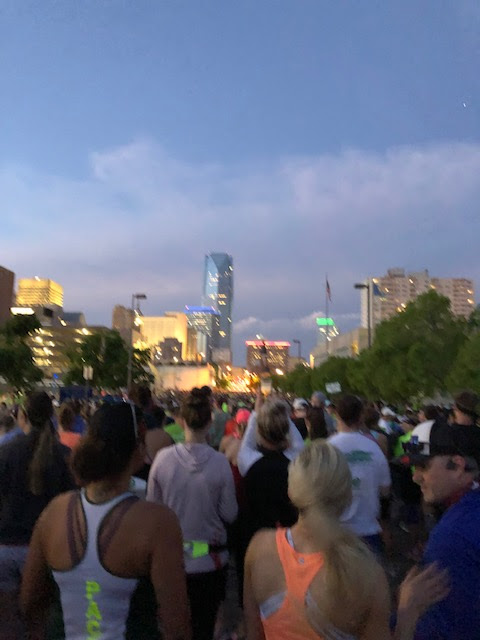 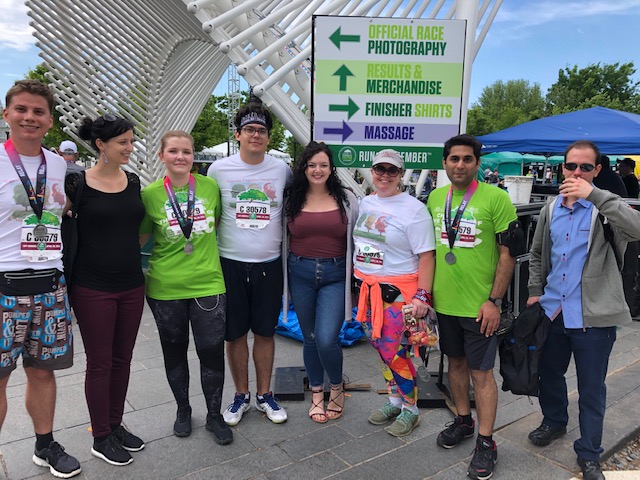 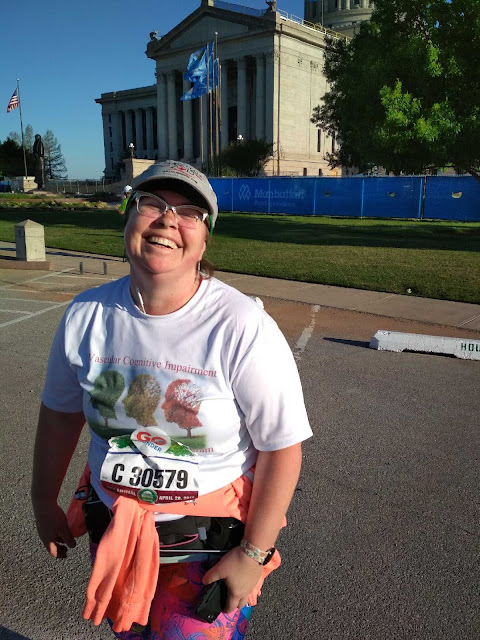 2. Evidently one of the bags of potting soil I bought for my most recent set of houseplants must have been infested with the eggs of fungus gnats, because I have a terrible infestation of them.  I've had them before, but never this bad.  This year, they're only in newly potted plants too which is why I think it must be the soil.  Unfortunately, most of those newly potted plants were destined for my office, so now there are swarms of gnats in my office.  My next door neighbor is about to kill me because even though he has no plants they're migrating into his office.  I've tried bug killing sprays which worked before, but that hasn't been enough to eliminate the infestation, so now I've but these yellow sticky traps everywhere.  Unfortunately, they seem to be drawn both to people and to the light of my computer monitor so they tend to swarm around my head while I try to work.  In case you were confused, this is not and "I Like".  It's a testament to how much I love my plants that I'm going to such desperate lengths.  Any suggestion for fungus gnats (different from fruit flies), I'm all ears. 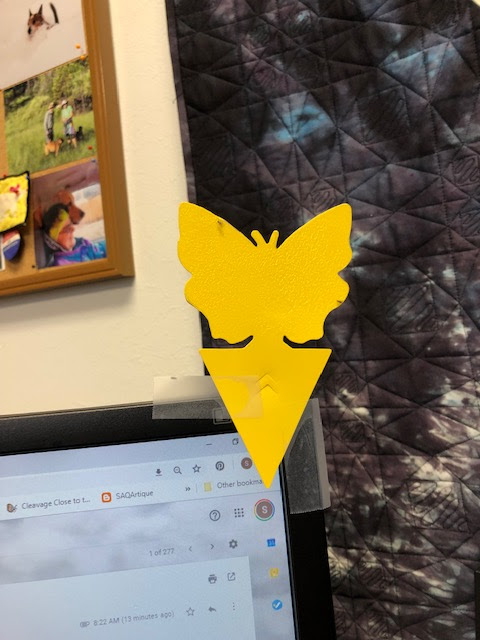 3.  It's been raining buckets and buckets and then raining some more (we lucked out SOOOOO MUCH for the marathon), so of course my back yard is a giant mud swimming pool, but on the upside, these cool mushrooms are growing in one of my pots of bulbs.  Nifty!  And almost all my dahlias have sprouted (not in this picture) so bonus there too! 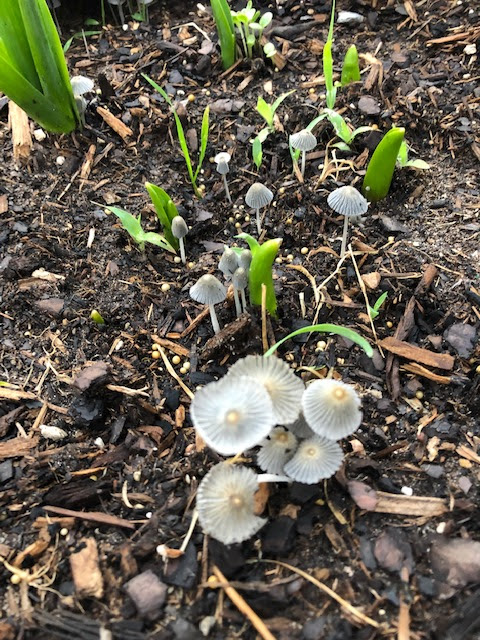 4.  Here's a look at one of the quilts I've been working on; I cut out all those little squares to use as musical notes.  It turned out I didn't need that many, so now I have extras to use as decoration in the borders.  I love the array of colors.  Lots of them are from hand dyed or hand painted fabrics, so up close there's lots more variation than you can see here. 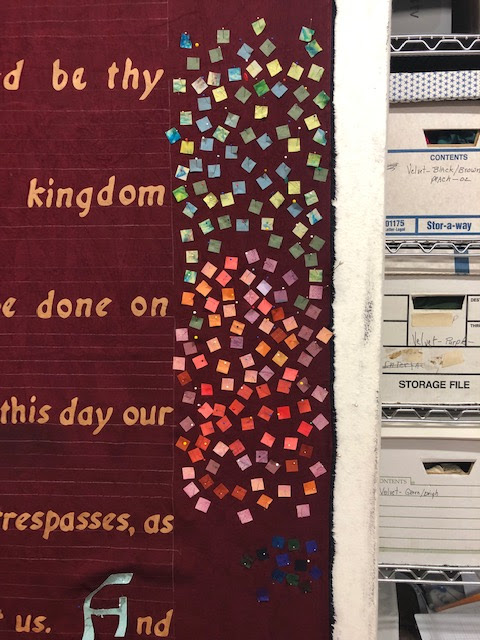 5.  The tiny Bullett bush has a clump of beautiful pink flowers!  I'm so excited, I think that means I will have one elderberry! 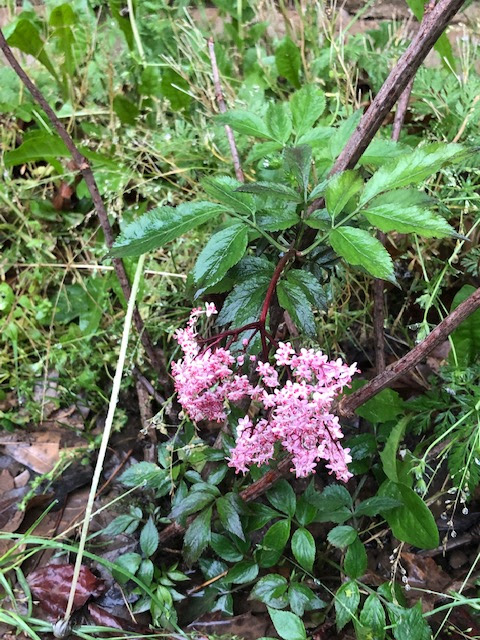 6.  And the cacti are growing well.  They're starting to develop secondary groups of spines (rather than just the ones on top). 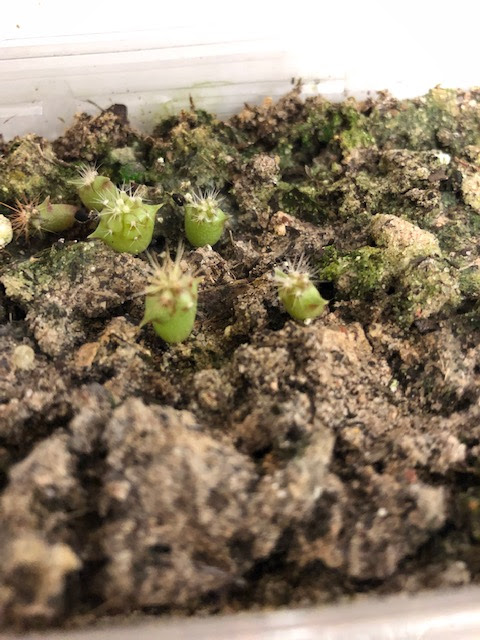 7.  I really liked these two recent history posts.  One was on the British Library blog and is a short article about an exhibit on the history of writing (so cool).  The second is from the history blog and is about some new 3D reconstructions of neolithic dogs and the role they played in neolithic society (even cooler).


And now, I'm going off to the microscope, largely because I need to get out of the swarms of gnats in my office.  Wishing everyone a happy Thursday!  Click over to LeeAnnas for more I like!
Posted by Shannon at 8:52 AM 10 comments: