Many thanks to all those who offered their condolences about my wretched holes!  The Bo-Nash powder was great- it worked exactly as it promised, however, even with the patch, you can still sort of see the holes.  I'm hoping some judicious quilting will help. 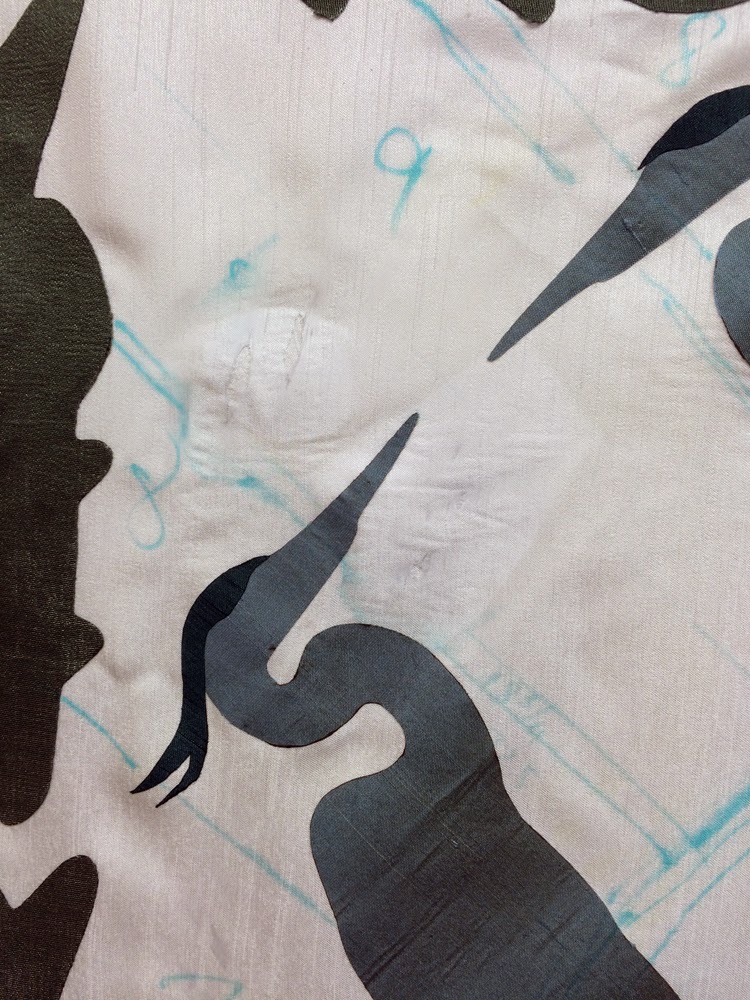 Anyway, I moved on.  I went ahead and marked the background for quilting prior to taking the quilt top off my design wall since last time I didn't do it until after it was layered and basted and the puffiness from the batting was a pain to mark over. 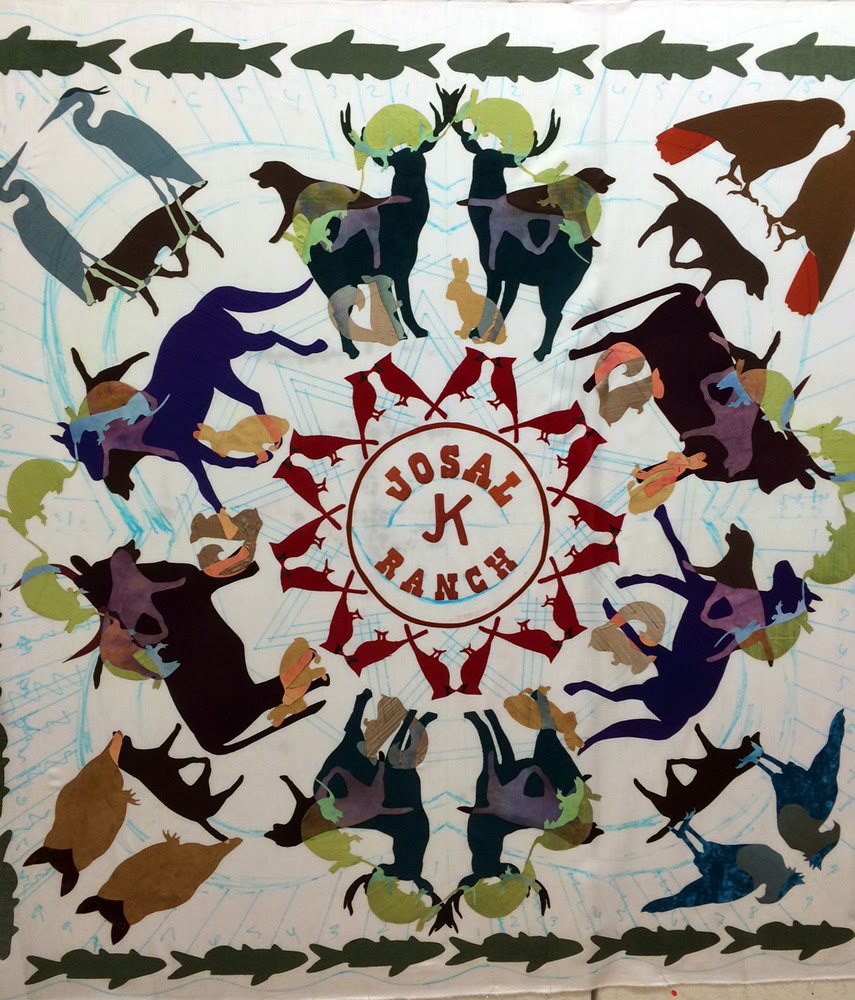 I've also now successfully quilted all of the animals to the first layer of batting.  I'm doing this one just like my last one in this respect.  I quilted the animals only on the first layer of batting, and then when I add the second layer of batting and ditch quilt around the appliques/stitch down the background, the animals should puff up nicely.  Many of them are just too big to go without any stitching, and I like the extra detail it provides, but it's more fun if they puff up.  I'm taking it to my mom's over Thanksgiving to baste all the layers together on her longarm- makes it so much easier to quilt on my home machine. 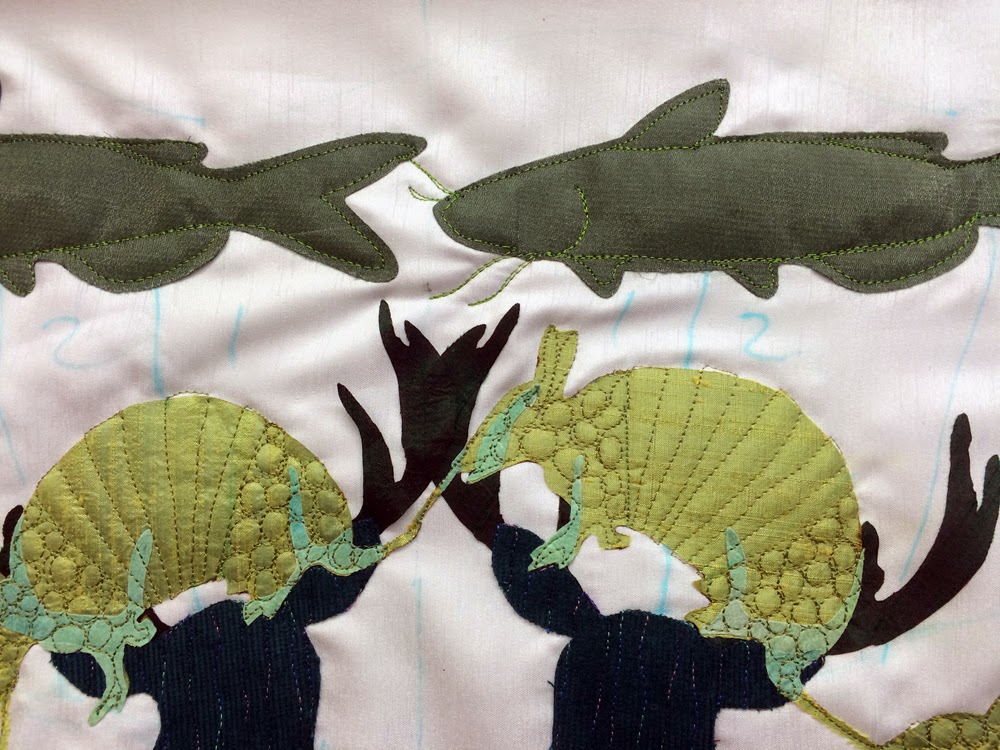 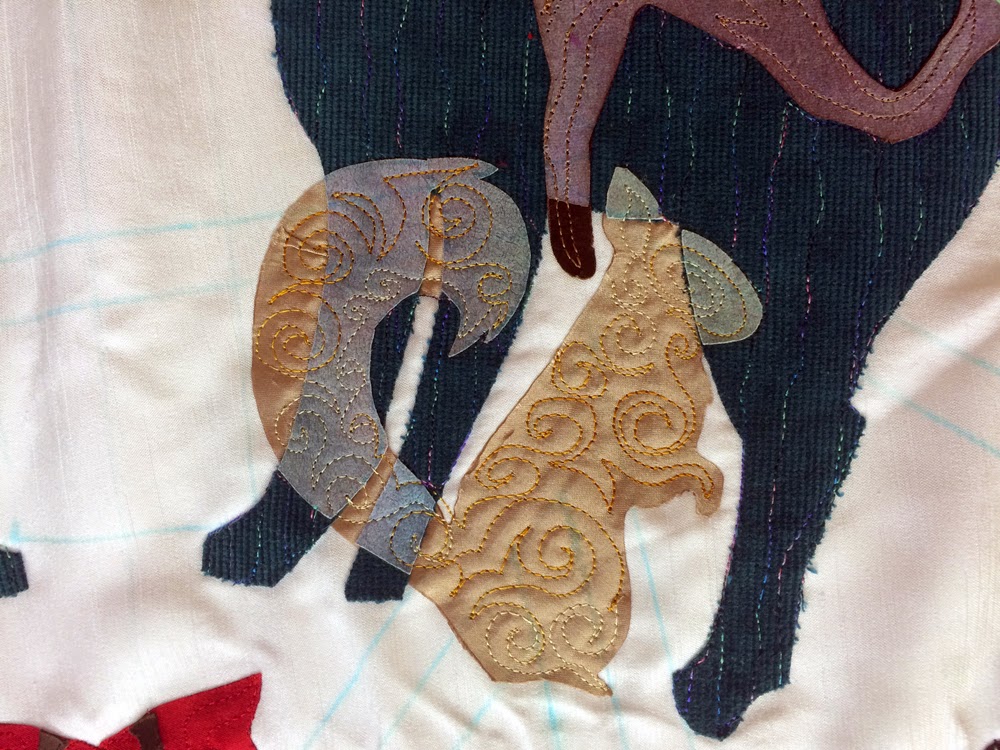 The big birds in the four corners are all quilted with different metallic threads, which makes me happy. 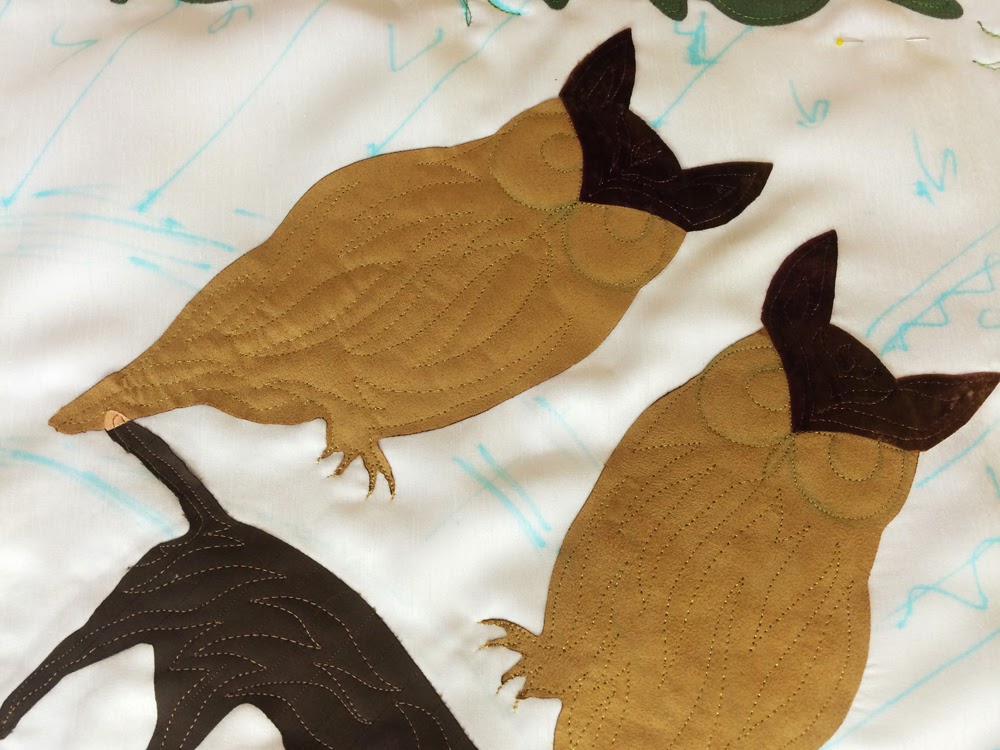 I hope you all have a wonderful Thanksgiving!

Hooray for progress on the new mandala!  The top is finished! 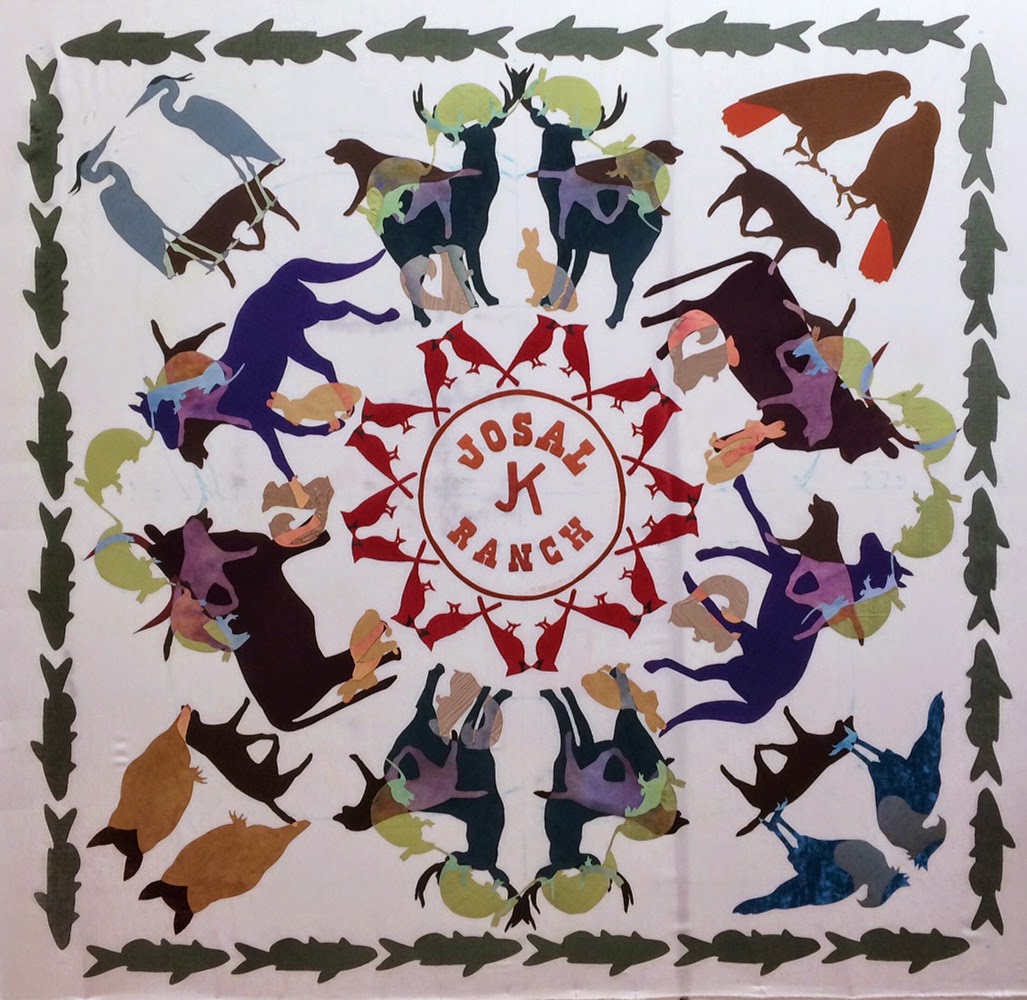 And then, there's this.  This happened last Saturday as I was attaching the last animals.  Only now after several intervening days have swear words stopped coming out of my mouth (sorry for the bad attitude, but ACK).  I don't know if you can tell, but this is four holes in my quilt top.  From my iron. After days of working with the iron on this quilt with no problems.  I'm refraining from screaming in all caps in the blog post only because who wants to read that? 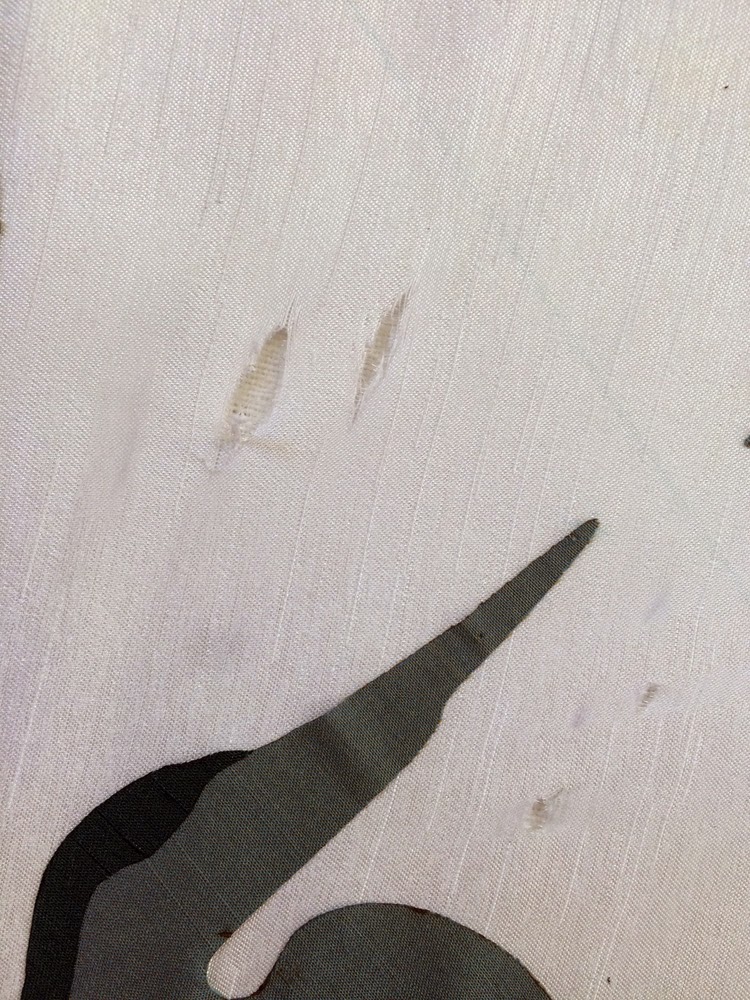 I've ordered some miracle Bo-Nash powder and generated some test holes.  The only thing I can do is try to patch it with the Bo-nash from the back.  If that doesn't work, who knows what I'll try. What a mess.

A couple years ago my mom and I each made a gum drop pouf from Amy Butler's great pattern.  Mine is still a mainstay in my sewing room- I use it as a foot stool when I'm allowed, but more often than not one of my three dogs claims it- they go so far as to push my feet off if they feel I'm intruding on their space.  As a result, it's gotten a little smushed but is nonetheless still well-loved.

My mom gave the one she made to my sister, who has since had to throw it out because her cat peed on it numerous times, and my mom has long wanted a new one.  I've been saving "stuffing" (i.e. teeny tiny scraps too small for anything else) ever since and finally had enough to make another one for my mom.

We made the original ones out of quilting cotton, but I've often thought since then that they might be better out of some home dec fabric.  I decided to use fabric I already had on hand, especially since I found (from who know where) this fun teal cordouroy and another complementary print.  I wish I'd had enough to alternate pieces, but alas there was only enough of the print for two segments.  I did include the piping (as in my earlier version) which I think is a nice complement. 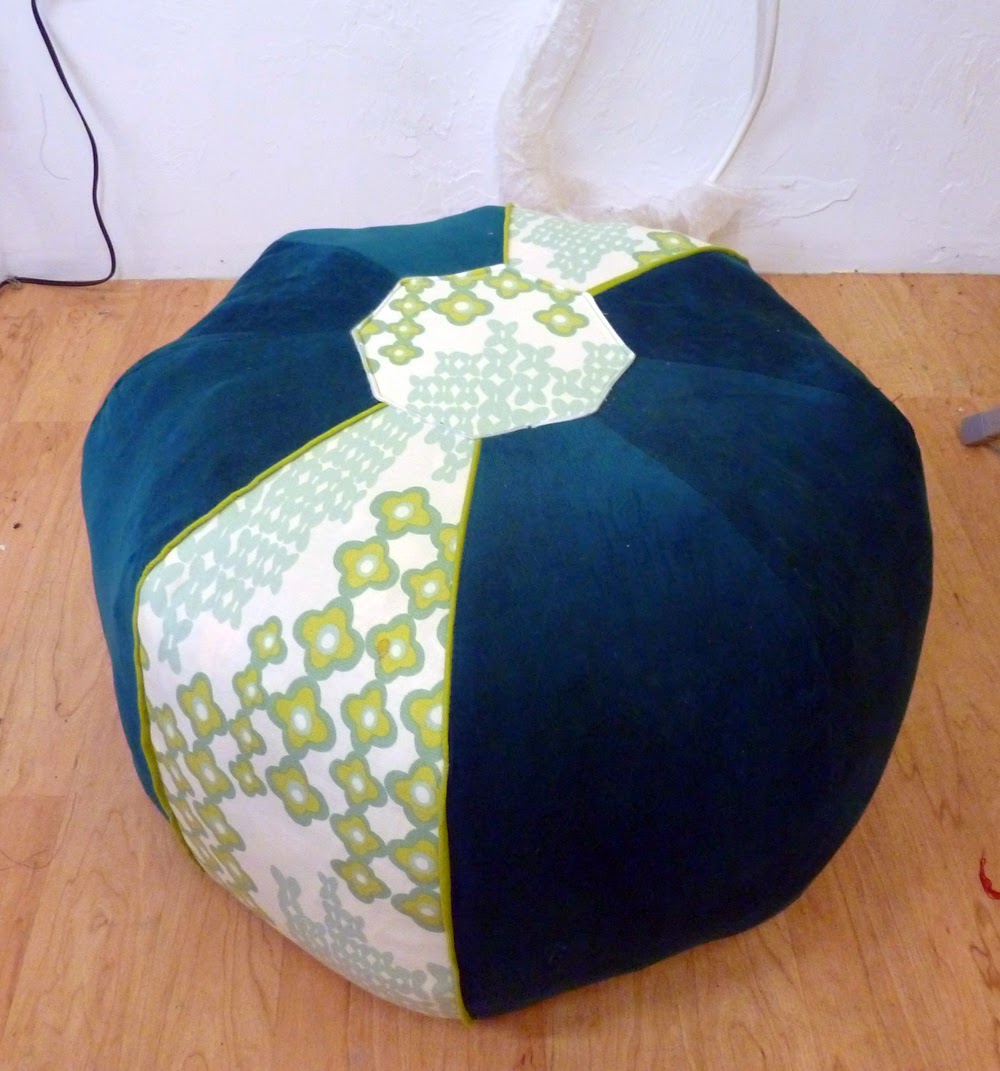 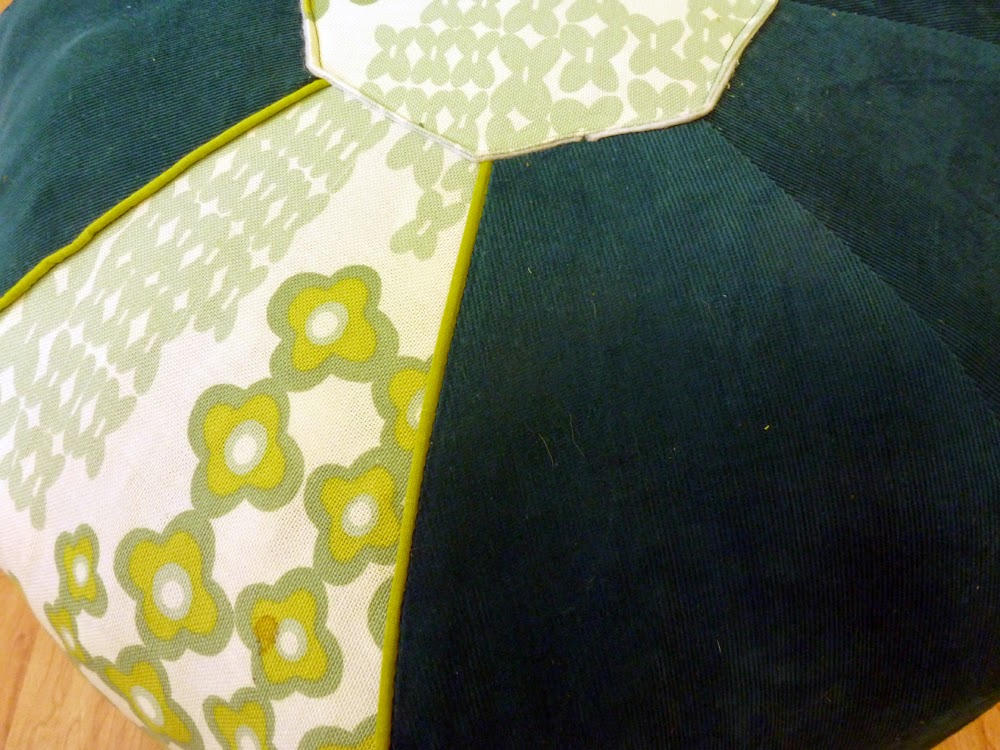 It takes a surprising amount of stuffing to fill one of these to a nice sturdiness, and of course the use of the scraps makes it a little lumpy, but my previous ones are filled with a mix of scraps and poly-fill and it has evened out over time. 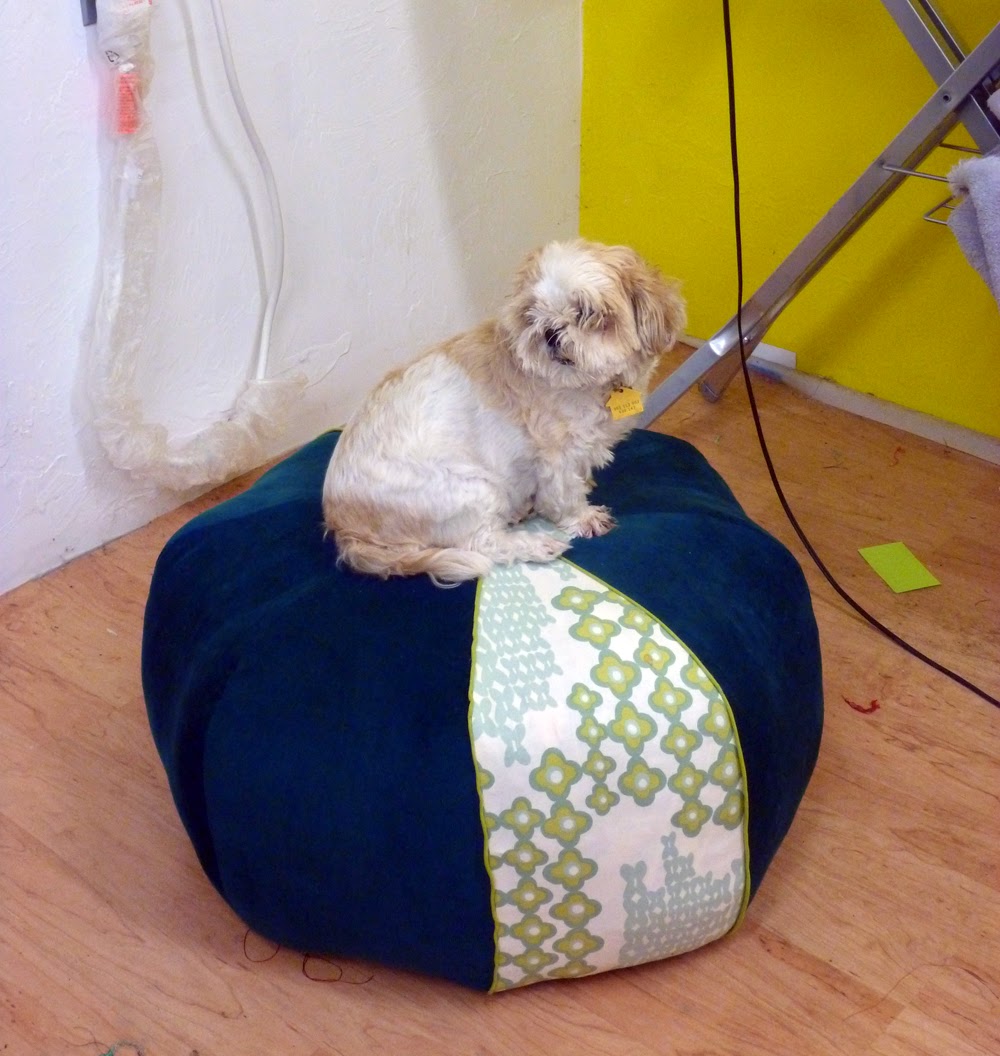 Missy likes it in any case, so hopefully my mom will too!

While my family was all here visiting over Labor Day my mom, sister, and I worked together assembly-line style to piece this adorable quilt top for a long-time family friend of ours who's having a new baby soon.

My mom found this adorable sheep pattern in the June 2014 issue of The Quilt Life magazine (it's a pattern by Irene Berry) and we thought it would be great for a new baby.  I'm pleased to say the three of us knocked the top out in an afternoon-and-a-half and used all stash fabrics except for the background black and white. 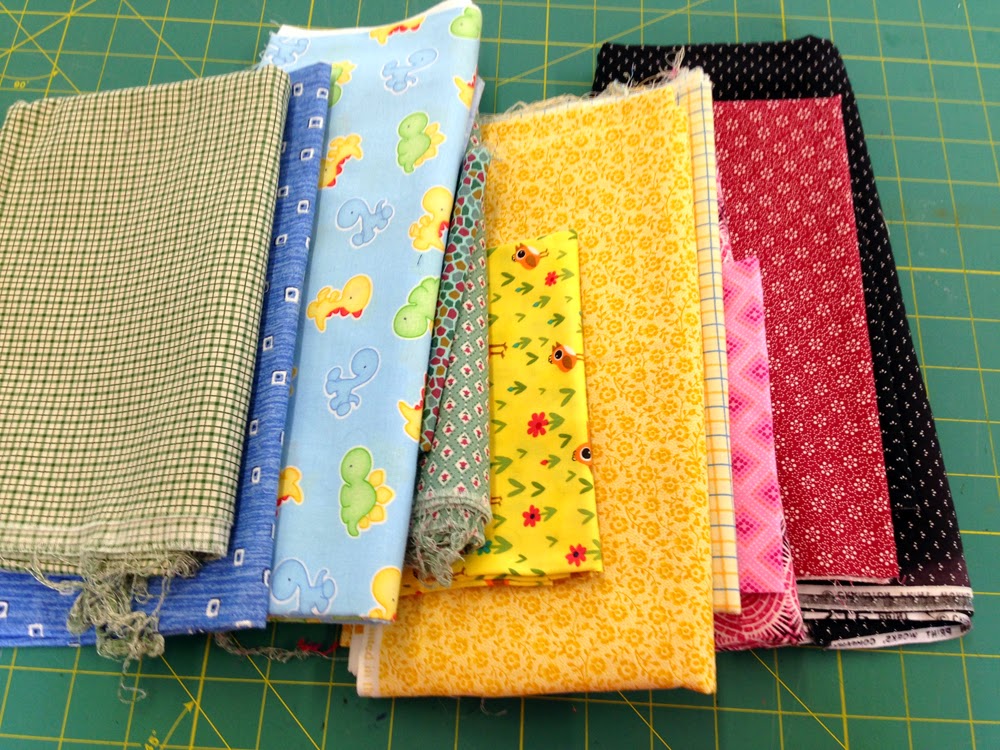 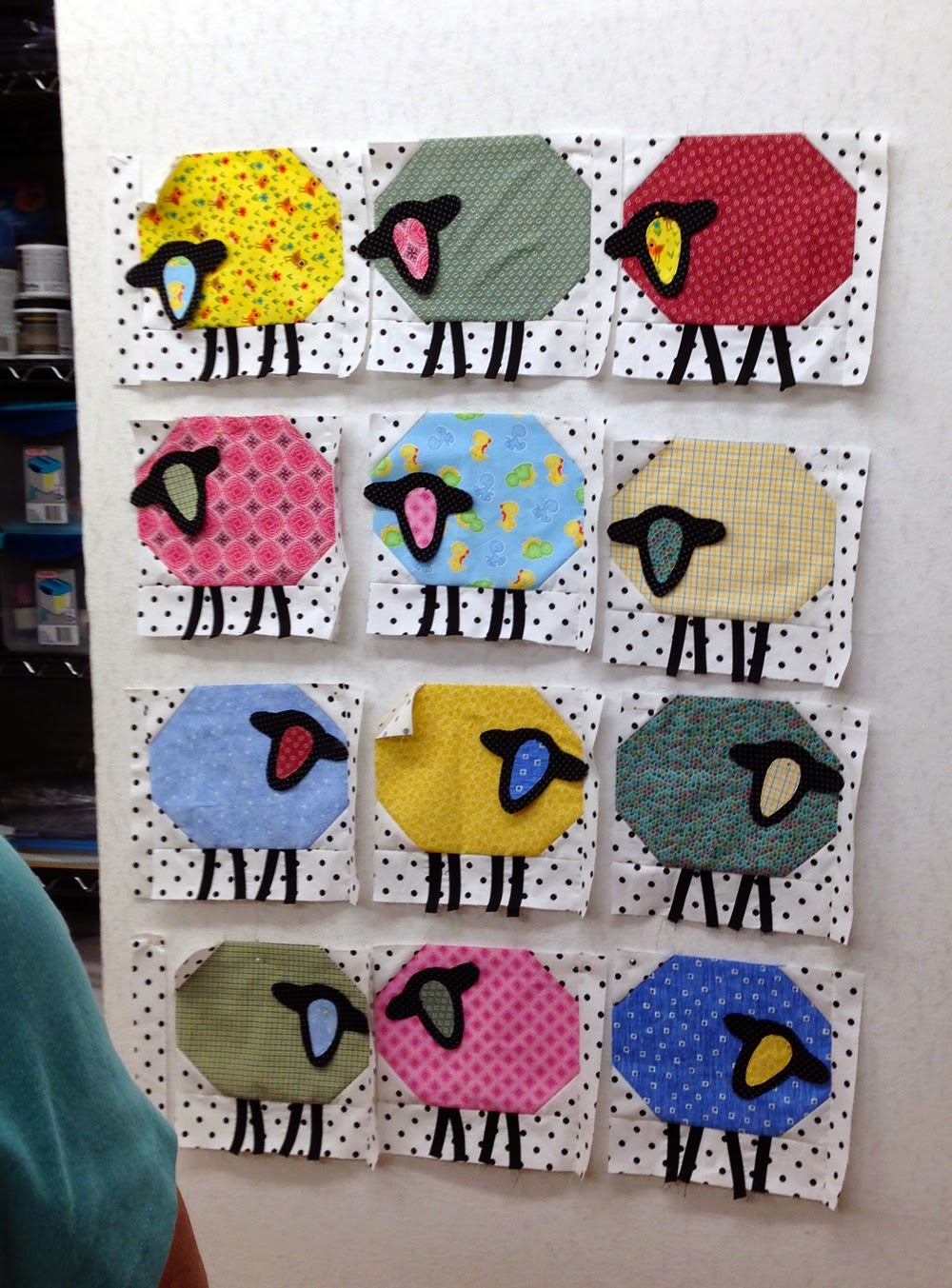 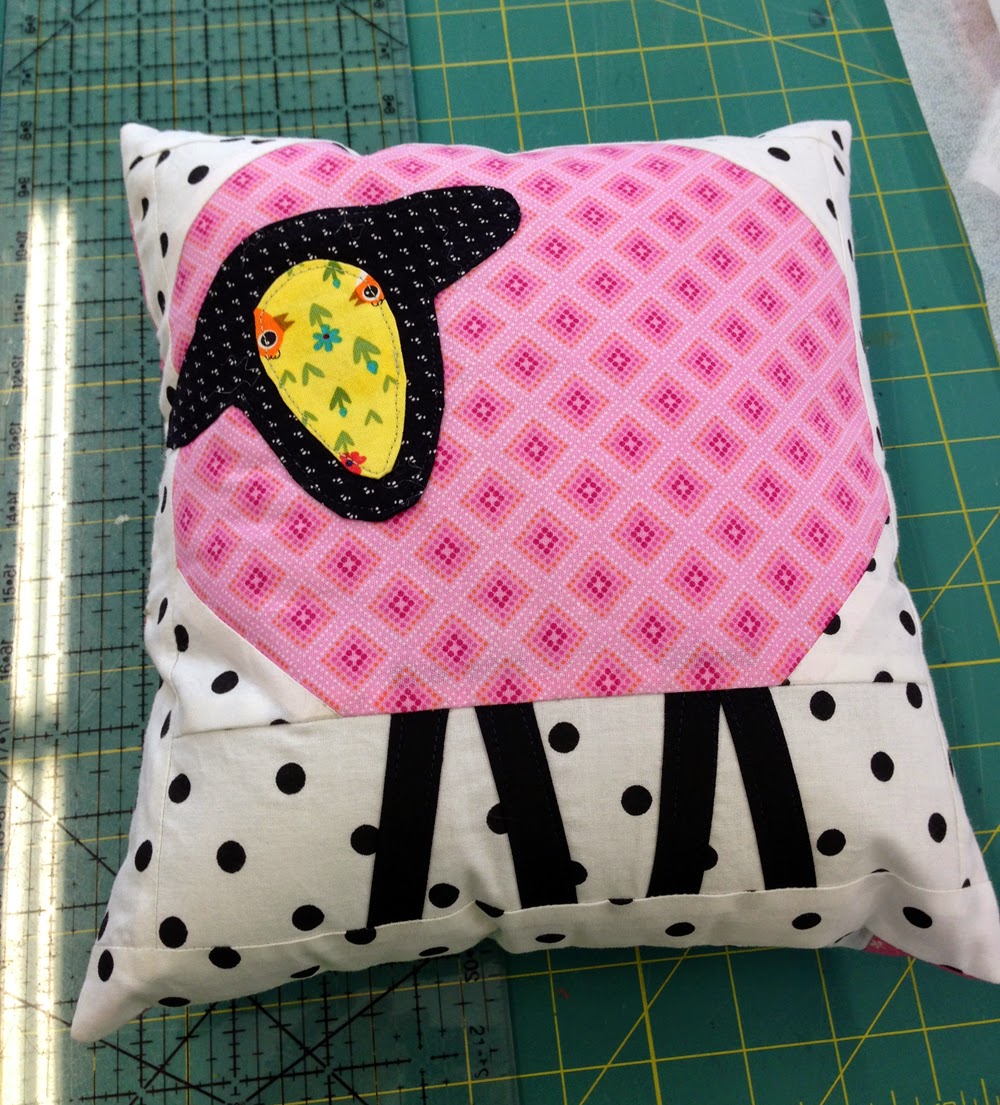 My mom took it home to quilt on her long arm and recently sent me a snapshot of the finished quilt.  I loved the light rainbow binding, although it's kind of hard to see in the picture.  We weren't able to make it to the shower, but apparently Chloe loved it.  We also made this tooth pillow (the sheep head is an open pocket) for the new baby's older sister Blair.  She's only three (so a little young for losing teeth) but we wanted her to have something new and special too. 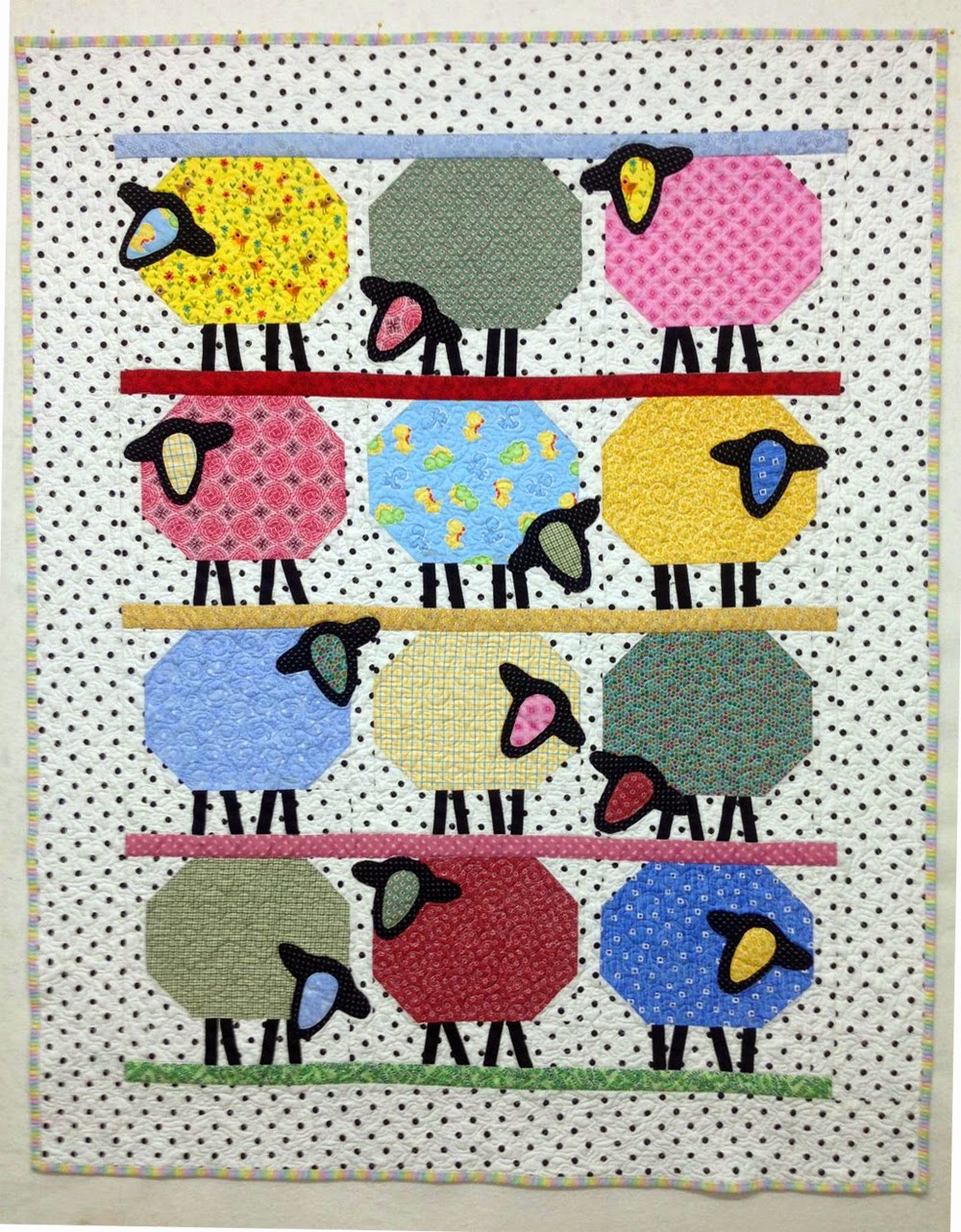 I love being able to do projects with my mom and sister, and it was fun to be able to work on this one.

Congrats to Chloe and Shawn!
Posted by Shannon at 9:19 PM 4 comments:

A couple of weekends ago Raegan and Walker came over so we had another crafty afternoon.  It was just before Halloween, so we all painted pumpkins, but the main order of the day was to finish Raegan's quilt.  She'd pieced the large 9-patch on a previous weekend, so for this weekend I'd prepared the sandwich and let her quilt it using the walking foot.  She did really well, no sewing injuries, and then I put on the binding. 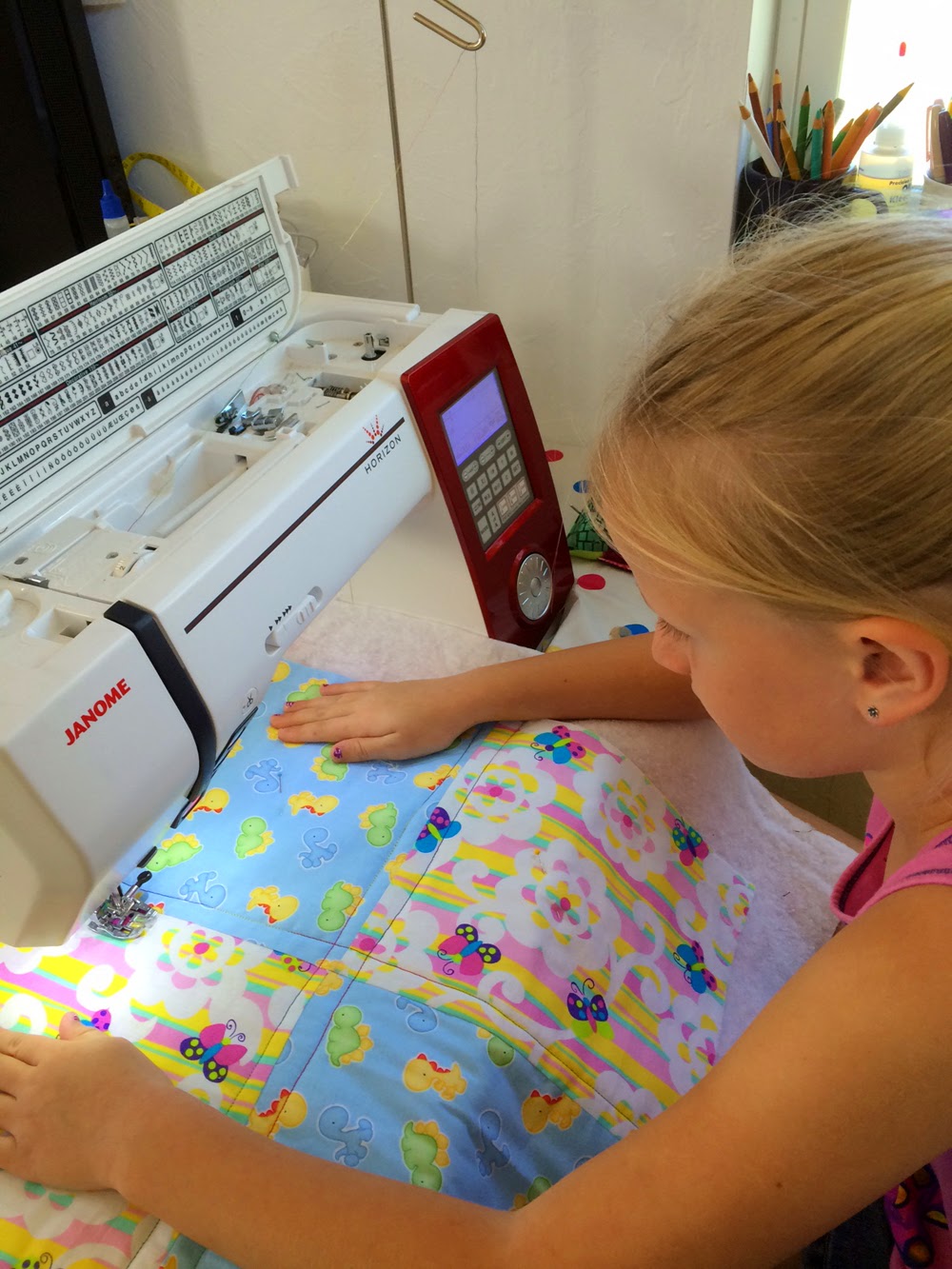 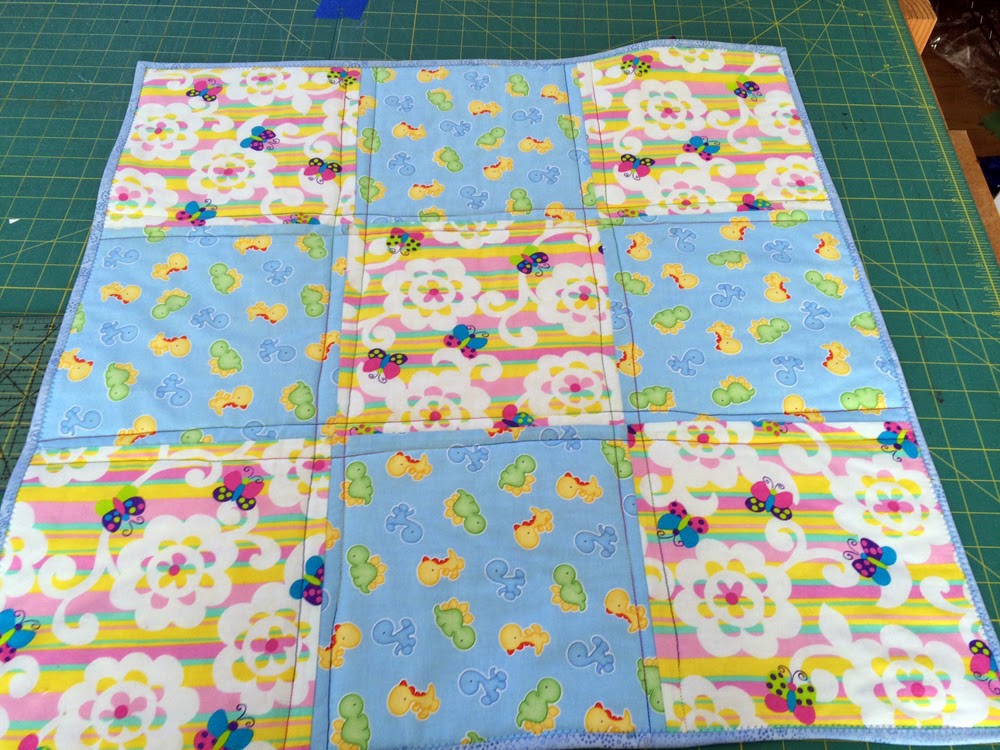 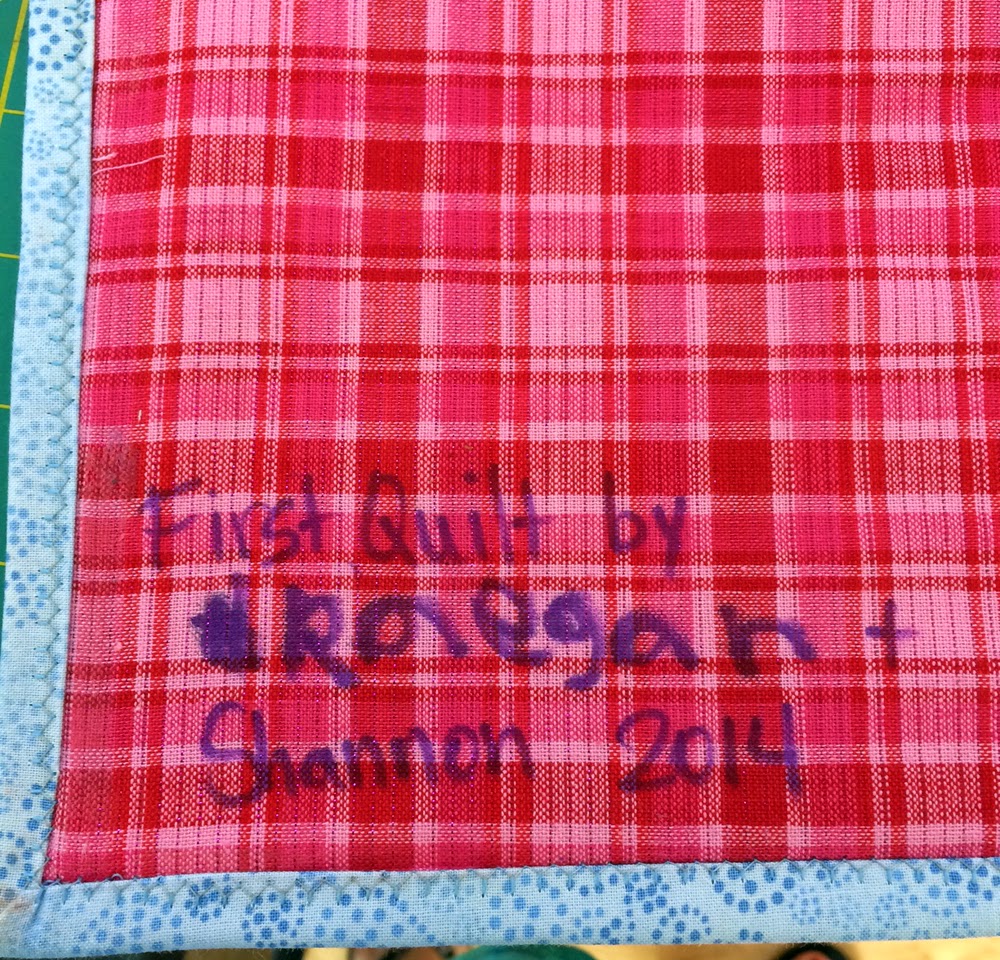 Instead of sewing on a label, she just wrote her name on the back and I filled in the rest. 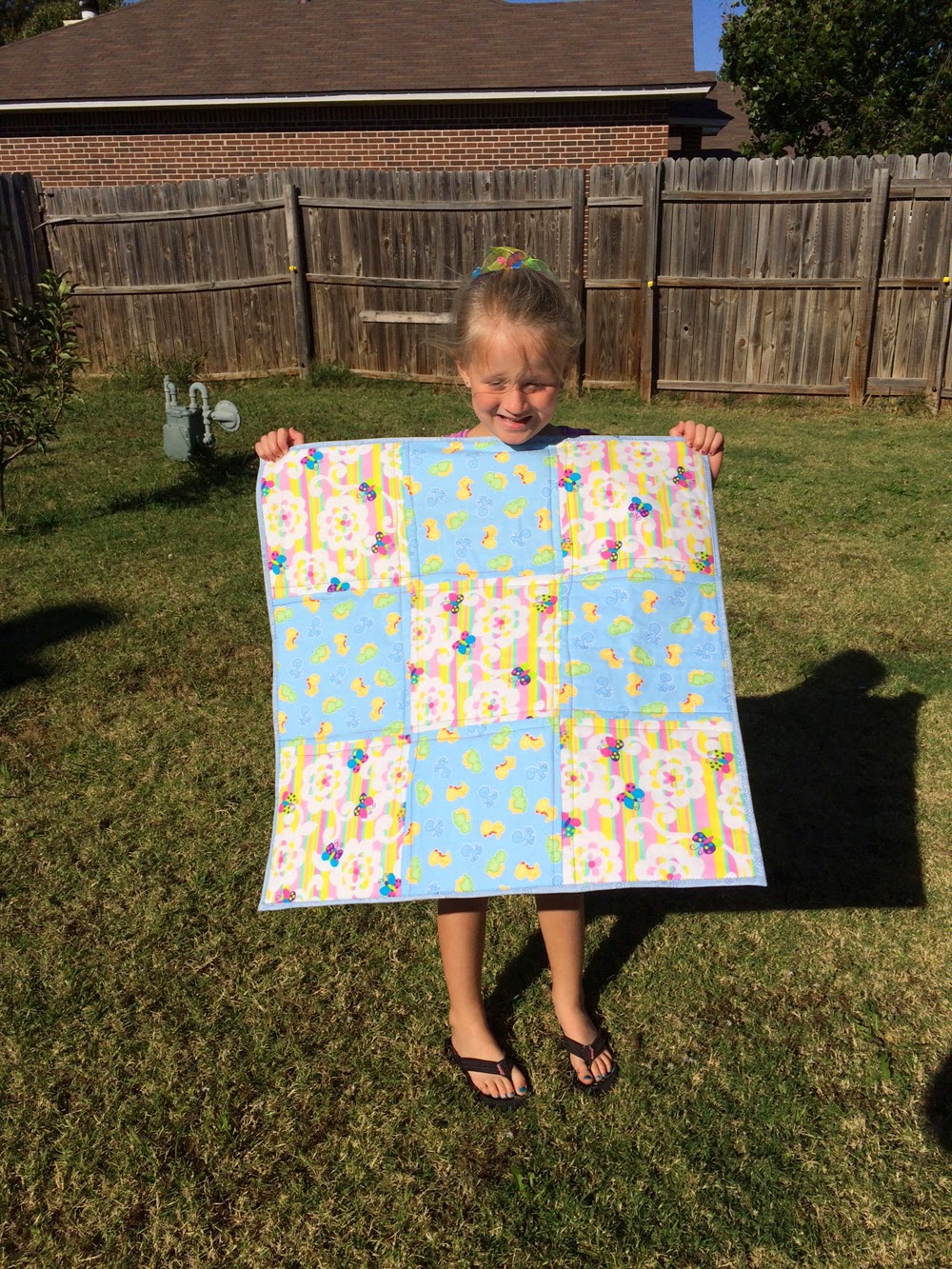 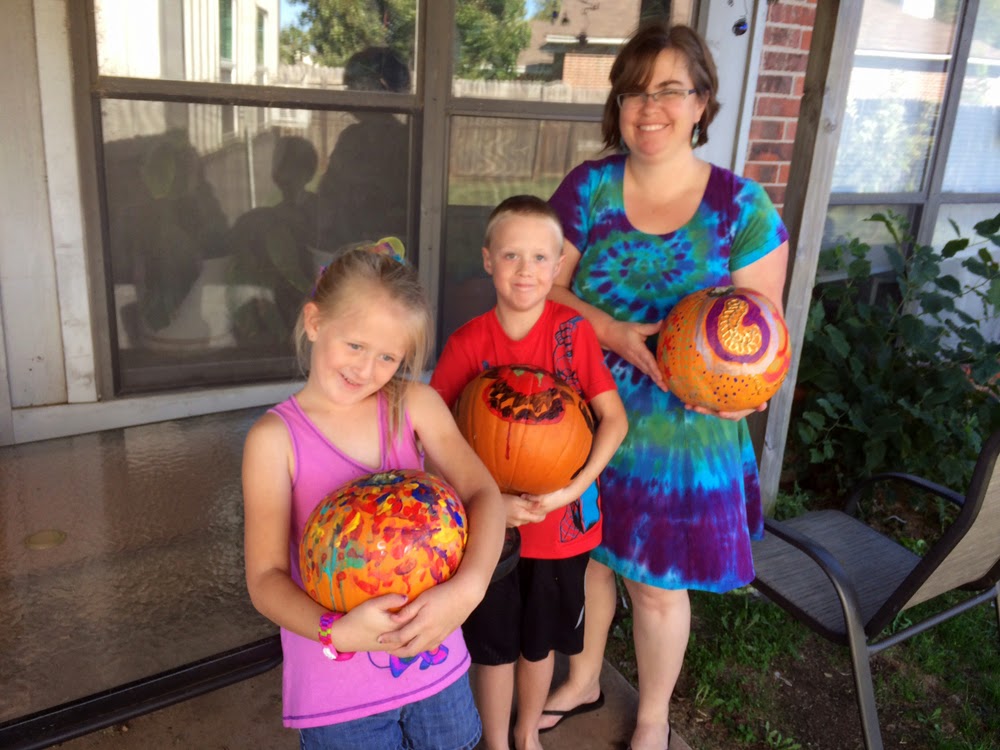 Next time Walker's going to quilt!