My sister came up a couple weekends ago and asked if she could host a crafty bridesmaid's party at my house for a friend of hers who is getting married.  Saturday afternoon they all came over, and had a fabulous time decorating canvas shoes for the wedding (rehearsal? getting ready?  I'm not quite sure).

I'd known Jen (the bride) since Becky was in college, but had never met the other two girls before, Calista and Sara.  They're spinners and knitters so it was wonderful to spend some time with some more fiber people!  I didn't make any shoes, but had fun hanging out with them while working on other stuff. 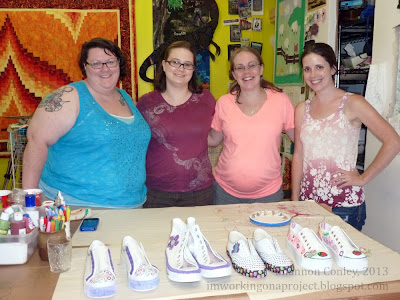 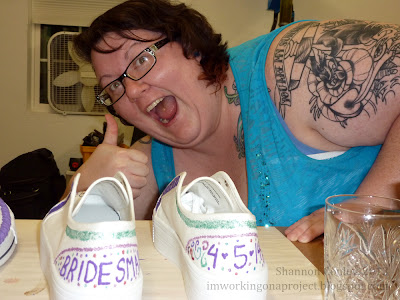 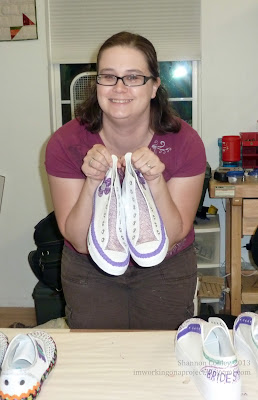 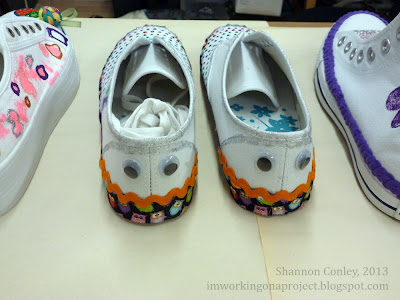 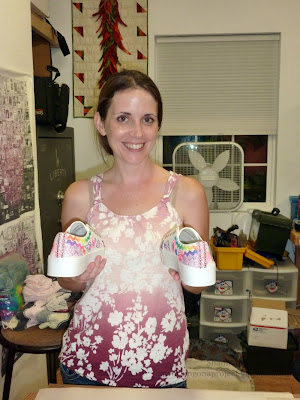 I'm such an introvert, I usually hate parties and meeting new people, but I really had a good time and I hope they did too.  They live in Tulsa and OKC (which is why the party was at my house and not my sister's down in Dallas), and even though they're Becky's friends I hope to meet up with them more in future!

Charity Quilt for the Fair

I saw this adorable quilt of Jeni's over at In Color Order and thought it would be a good pattern for this year's charity quilt for the fair.  I didn't really have a pattern but figured I'd just make some quarter square triangles and then intersperse them with solid strips to get this effect.  I picked a yellow and teal color scheme to be pretty gender neutral.  It worked out great, because I had a bunch of six inch white blocks left over from Linda's Quilt, so I used those for the QSTs.  I had some little QST template papers I bought at the Dallas quilt show several years ago and never tried, so I was excited to get to use them.  They were really easy to use and enabled me to sew while I chatted to Becky, but I don't think I piece enough to buy them in future. 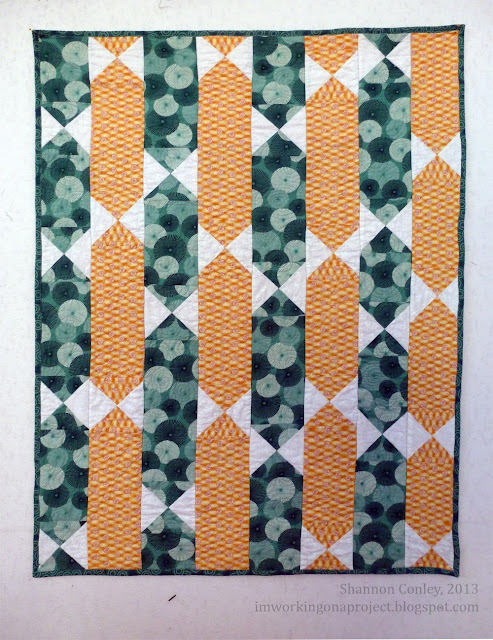 Posted by Shannon at 9:25 AM No comments:

Minky Blankets for Alex and Russell

I recently found out that my long-time childhood friend Annalise is having a baby boy shortly after Becky has baby Alex, so I thought it was time for another round of minky blankets!  So soft and cuddly.

The top one, panda fabric backed with green Minky, is for Alex.  The bottom one (yellow minky) features a fun bear-alphabet-professions panel (e.g. a bear dressed up as a doctor next to the letter D) and is for Annalise's baby Russell.

I hope they enjoy! 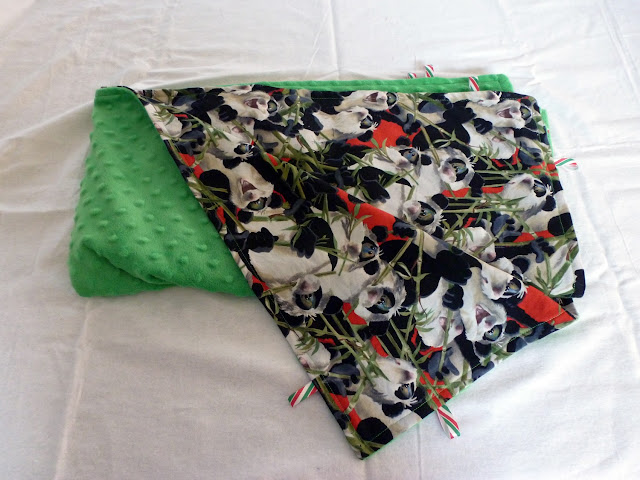 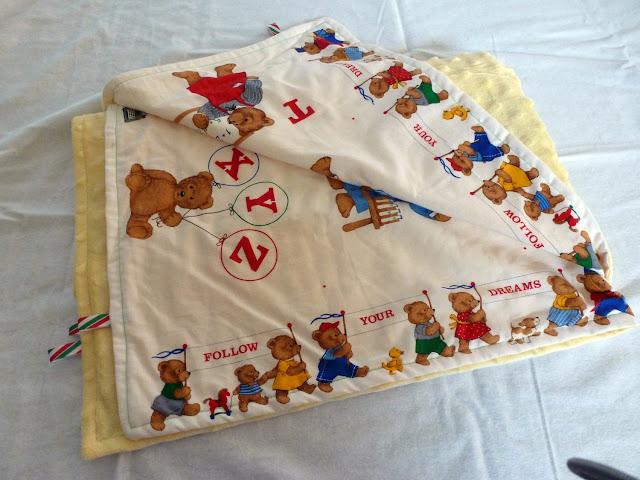 WIP Wednesday: Shadows on the Orchard

Since I finished the dog quilt (which did not, alas, get into the show I was rushing to finish it for), I've started designing another small art quilt for a SAQA New Mexico challenge.  But while I wait for some supplies to arrive for that, I've been spending some time working on the Orchard Quilt.  When last we saw it, I'd finished the quilting, and it only remained to put some shadows in on the trees.

I painted some shadows for the trees back at Asilomar when I first started the project, but later realized they went the wrong direction for the light source in the quilt.  I'm not a good drawer or painter, so decided to use Photoshop to get the shape and orientation of the shadows.  I took a picture of the quilt, resized so the picture dimensions matched the quilt dimensions and then created new layers containing each tree.  I was then able to transform the layers so they were the correct angle/direction/perspective for my light source.  I then printed out each of the layers and traced the outline onto freezer paper.  After carefully cutting out the tree outline with an exacto knife, I was able to iron the freezer paper stencil to the quilt surface.

I decided to use Shiva Paintstiks to fill in the stencil.  I did a practice tree first on a piece of scrap fabric and decided that a light mix of silver, blue, and purple with a tiny bit of black gave a good color.  I love the translucence and iridescence of the painstiks, not nearly as heavy as liquid paint.  I liked this approach for shadows and think I'll use it in future.  I actually think it might be fun to do some "shadow study" pieces;  the shadow on that big foreground tree was really cool and it made me sad that the vast majority of it went off the front of the quilt. 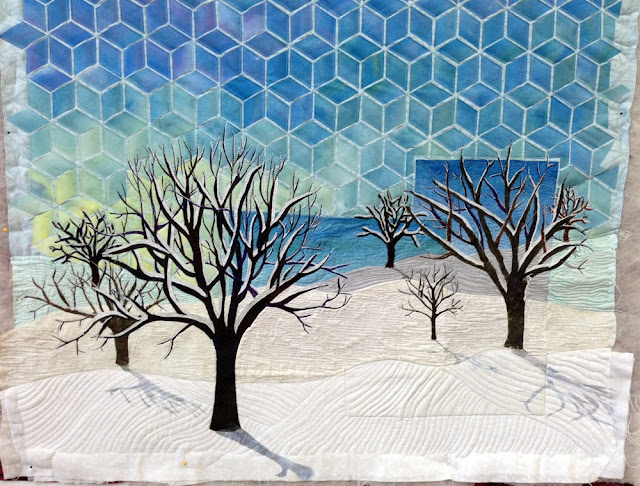 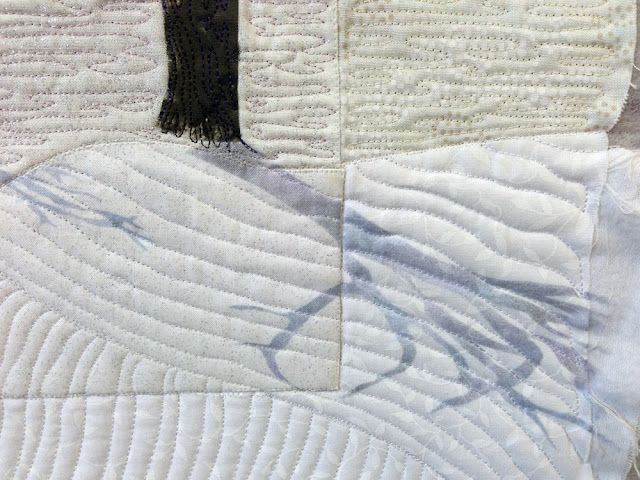 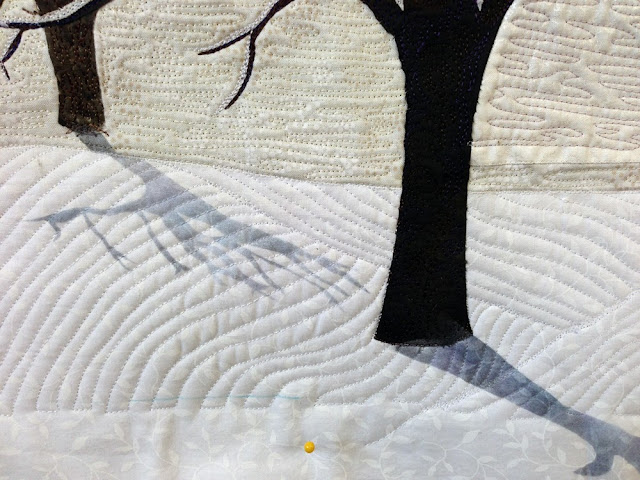 That tree on the left was supposed to look like it was on a snowbank (cream) behind the front tree (white), so I cut the shadow stencil apart and offset/shortened it since I felt like some of the shadow would be behind the hill where you wouldn't see it.  This is just about the last step on this quilt, I'm going to give the paintsticks a couple of days to set up and then iron them before I wet and block the whole thing in anticipation for facing/finishing.

Linking up as ever with Lee and Nina-Marie!  Hope you are all having a creative week!
Posted by Shannon at 8:00 AM 13 comments:

Email ThisBlogThis!Share to TwitterShare to FacebookShare to Pinterest
Labels: Orchard

My Aunt Susan and Uncle Kenny live in Tulsa, OK just a couple of hours from me and keep a few adorable alpacas.  They are brown, black, and white and named Cocoa, Magnum, Jordan, and Willie (the last named after my granddad according to my Aunt).   My uncle tried to get my aunt interested in spinning/crocheting/knitting since they have all the lovely alpaca wool, but it's just not her thing.  A couple years back though she did send a bunch of wool out to be spun and she was kind enough to give me the giant box of resulting yarn when I was up there visiting last weekend.

Talk about the best present ever, it's 100% alpaca, DK weight, and super soft.  I'm crocheting her a scarf with some of the black (with brown accents) but I haven't yet decided what to do with all the rest.  One thing I did decide to try was dyeing some of the white.  I was excited to learn I could use my procion fabric dyes but just had to soak the yarn in acid (vinegar, since it's a protein based fiber) rather than base (soda ash, like cotton which is cellulose based).  Who knew? 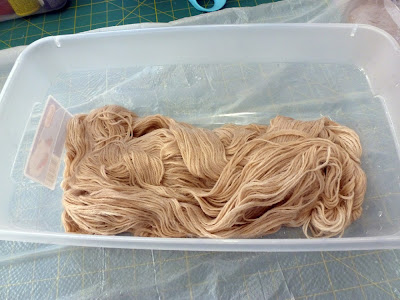 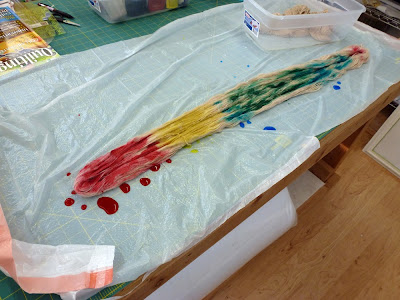 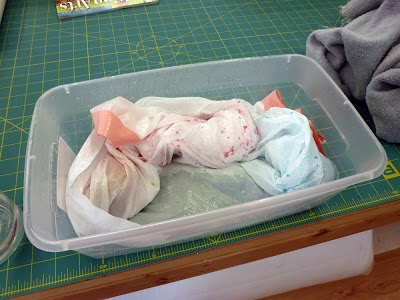 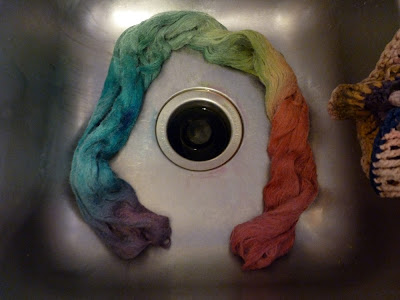 Cooling in the sink. 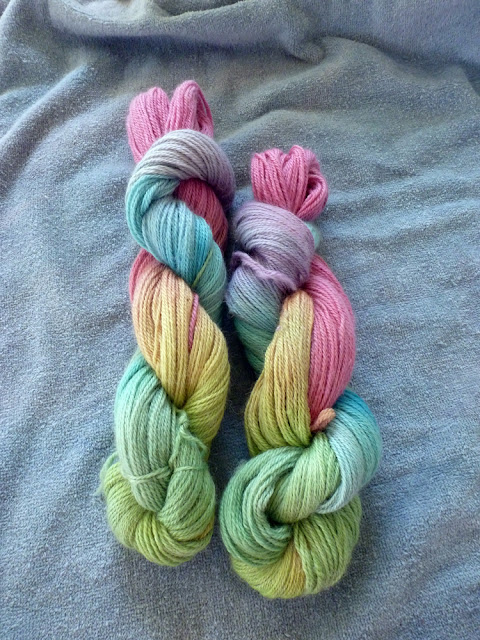 The colors turned out really pretty and soft, although I didn't get as much yellow as I'd like.  Interestingly, the colors all looked much more intense during the dyeing process and a bunch more dye rinsed out than I thought.  I don't know if I should have microwaved longer, or let it cool longer, or soaked in vinegar longer, or if alpaca wool dyes differently from regular wool?  I suppose I can just use more dye next time, this was definitely not a precise dyeing process, but I still think it turned out really pretty.

Finally, one last question, I've been thinking of trying to sell some of the yarn to help my aunt make back some of the money she paid to have it spun.  I don't have an etsy store, but thought about opening one or maybe just seeing if anyone has any other ideas?

Email ThisBlogThis!Share to TwitterShare to FacebookShare to Pinterest
Labels: Crochet

One of Mike's friends has his name and a little motorcycle icon embroidered on his fold up camp chair, so of course Mike wanted one too.   This was my first "real" embroidery project, so I did a bunch of test stitch outs first.  So glad I did since I was able to work out a bunch of miscellaneous issues.

I solved the "bobbin thread pulling forward on text" problem by just matching the bobbin color to the top color for the text part.  The thread was really never pulling up on the pictures so matching wasn't a big deal there (good since there are about a million thread switches in the motorcycle design and I wouldn't have wanted to change bobbins every time!).

It was good to work some more with my machine and learn some more about how it and the software work.  The motorcycle design is his motorcycle (a BMW R1200RT for anyone who cares) and I got it from Uniquewear.  The design was a bit pricey (came to almost $8US) but it was the only place I could find his specific bike.

He's about to leave on a long cross country bike trip; as always I'm praying for a safe journey. 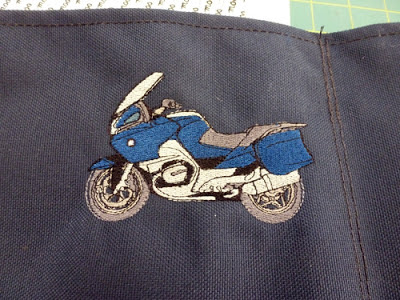 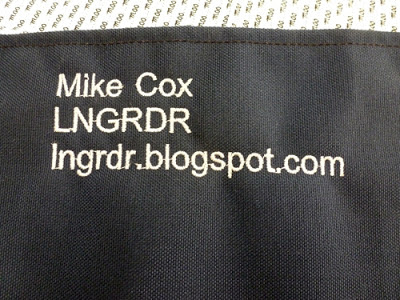 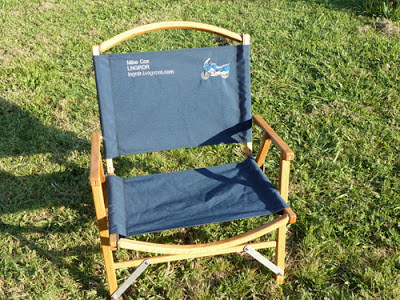 Email ThisBlogThis!Share to TwitterShare to FacebookShare to Pinterest
Labels: Embroidery

When I heard Becky was having another baby I knew I wanted to make a Grammy afghan, so as soon as we found out it was to be a boy (can't wait to meet you Alex!) I got started.  Grammy afghans are so called because our Grammy made one for Becky and me when we were kids.  Sadly she's passed away now so the next generation won't get to have an afghan from her, but they'll have on from me!

Thery're basically just giant granny squares with blocky square colored section.  I loved making this one for Alex and hope he will snuggle in it and think of me and all his family and how very
much we love him. 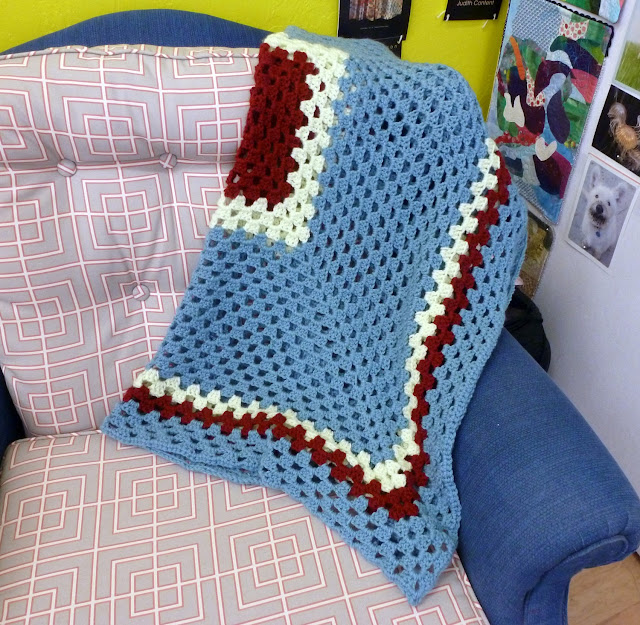 The Dogs are finished!

I'm so pleased to share that just two years and two weeks after it appeared on my first UFO list, I've finished the dog portraits!  For those of you who haven't been following along since the beginning, these are thread painted portraits of three of my dogs, mounted portrait style (only the top edge sewn down a la Jean Wells) to a separate quilt background on which silhouettes of said dogs have been thread sketched.  To see more posts about this project, click on the Dog Portrait tag.

"The Dogs"  Bullett, Missy, and Pumpkin.  Now there are four and Pumpkin is gone but they are all always in our hearts.

At some point I'll have to do a project incorporating the new two (Bentley and Shooter), but for now these three are staring out at me, filled with personality. 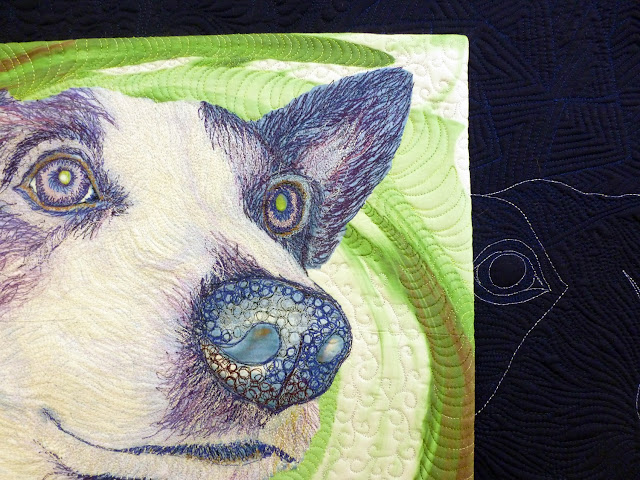 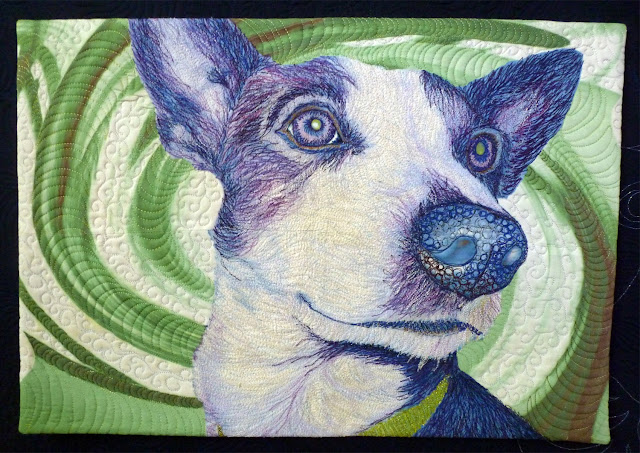 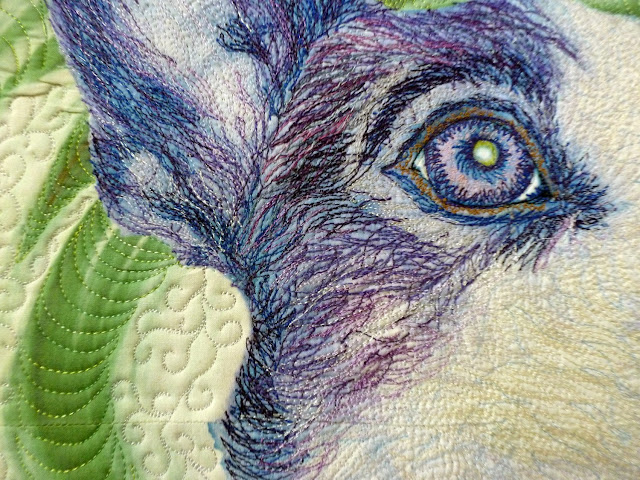 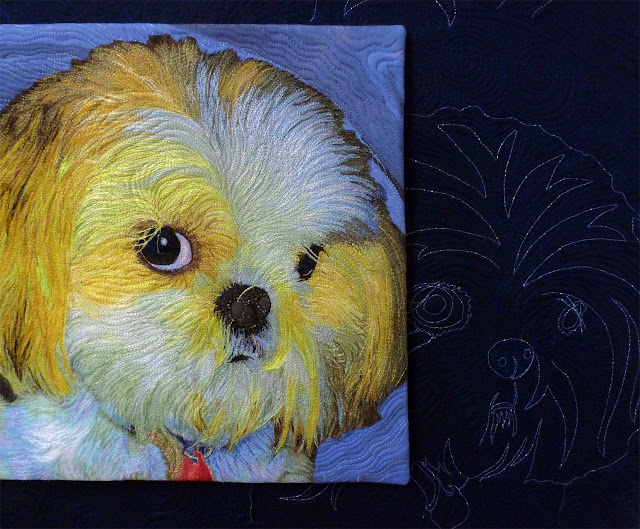 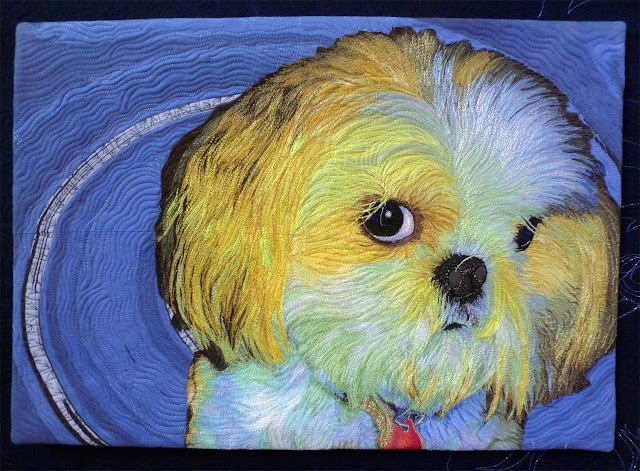 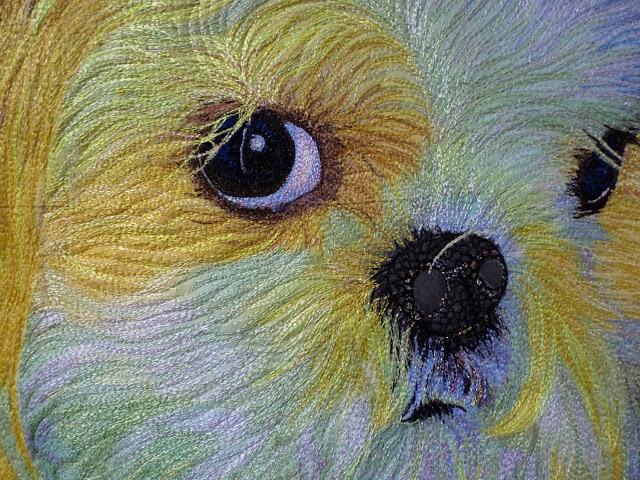 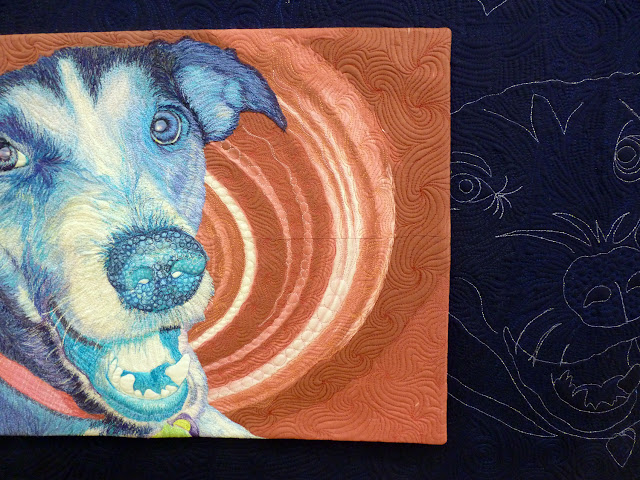 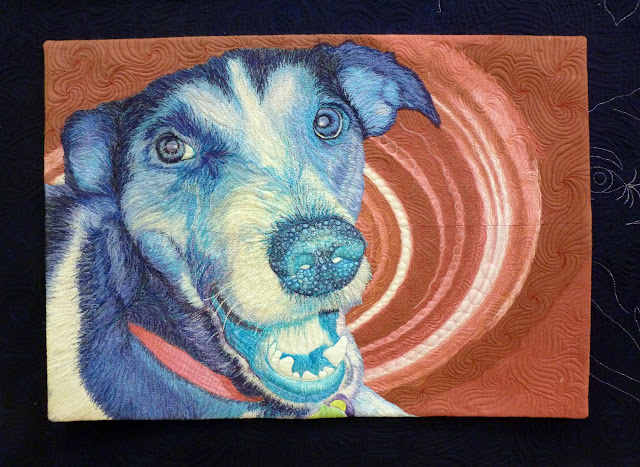 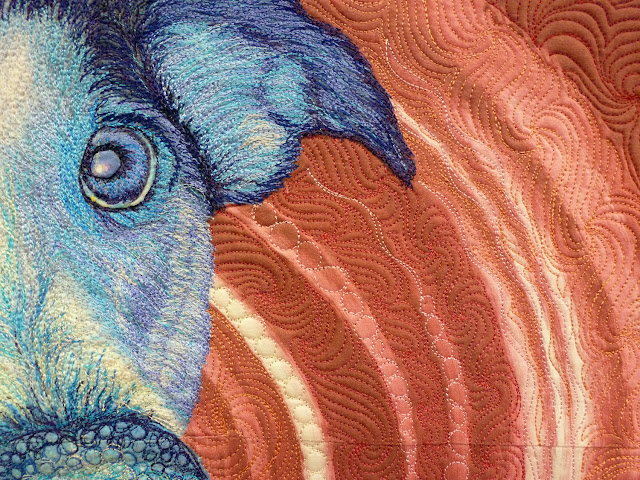 I'm linking up with Nina-Marie, Richard & Tanya, Quilt Story, and Leah Day!
Posted by Shannon at 8:21 AM 17 comments: