I finished the hand stitching on my new piece with all the layers.  Last week I showed the mountain cut-out bits stitched to the yellow, and after I finished those, I started working on the canyon or frame bits.  As you can see in the second picture, I again started with a machine quilted sandwich (backing/batting/front) with holes cut out of it in some places.

I then started to line up my frame layers.  It was a bit tricky to line up the base ones because the sandwich had shrunk a bit with the quilting and the holes had been cut out to align with the other layers without any shrinking, but I was able to get it lined up well enough.  For the mountain panel, I stitched each one (that is each mountain and each layer down separately), but for the frames, it was trickier.  In the first place, they needed to be secured down in at least 20 different spots.  But I couldn't just sew one spot and then another because much like tightening down one screw all the way before starting the others, that just pulled all the layers out of whack.  So I did all but the top layer at once, and stitched half the spots at the same time. 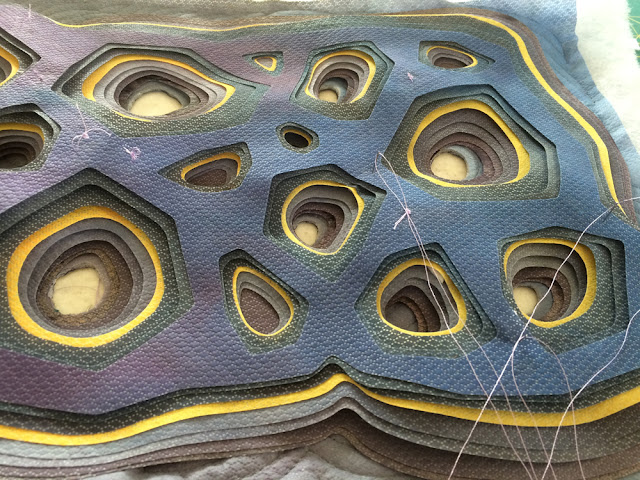 I put my base quilt on a flat portable design board (a ceiling tile covered in flannel) and layered all the frames except the top one in the correct position.  Then I threaded about 10-15 needles and starting from spots in the middle I inserted the little pieces of peltex between each layer (to give it depth).  Then I jabbed a needle through all the layers into the design board.  I repeated this for the other needles until I had needles jabbed through all the layers and distributed fairly evenly across the quilt.  I had to do multiple needles at once because with only one or two needles, every time I moved the piece (for example to get underneath to pull the needle through) all the layers shifted.  After jabbing the 10-15 needles in, the layers were pretty well anchored.  I was able to flip the whole thing over and pull through all the needles to the back.  I stitched through a couple of times using this approach.  I did a second set of needles/stitches after the first set since there were still more spots that needed to be anchored.  There's only peltex where there are stitches, so between the anchoring sites the fabric undulates and floats.  I sewed on the top layer last to hide the knots from the original anchoring stitches.  I used two stitches forming a cross shape, and these stitches varied widely in size from one anchor point to another.  It was startling how hard it was to make precise stitches through all those layers.

Of course the whole thing was so thick and stiff that I broke many many needles and had to use my clamps and thimbles to get the needles through, but I got it finished.   All the little purple knots in the picture above are the first round of anchor points and you can see several threads going for the second round of anchor points.

And here it is after I'd stitched on the top layer. 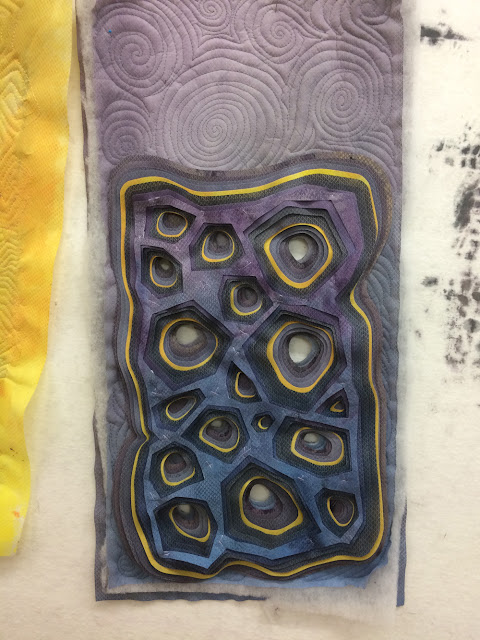 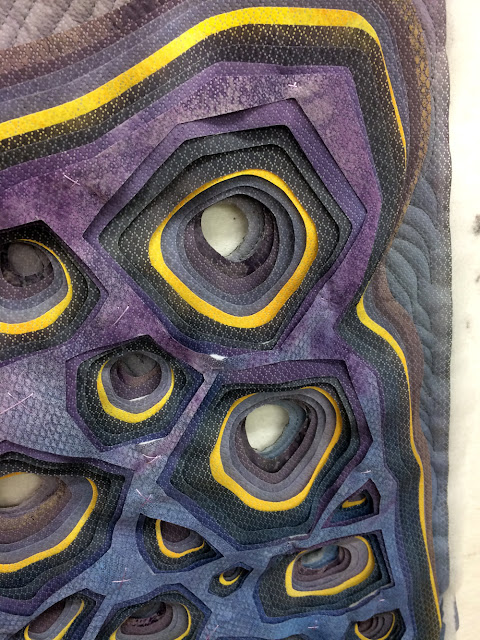 The next step was to finish the edges of the two panels, so I trimmed them down and faced them along the shape of the frame.  This went fine, but the more I looked at the panels together, the more it felt like the yellow base on the bottom mountain piece was overwhelming.  It drew the eye and distracted from the depth.  So I carefully removed the facing strips (they were made with scraps of the yellow painted fabric and I didn't have very much of it), cut down the panel, and re-faced. 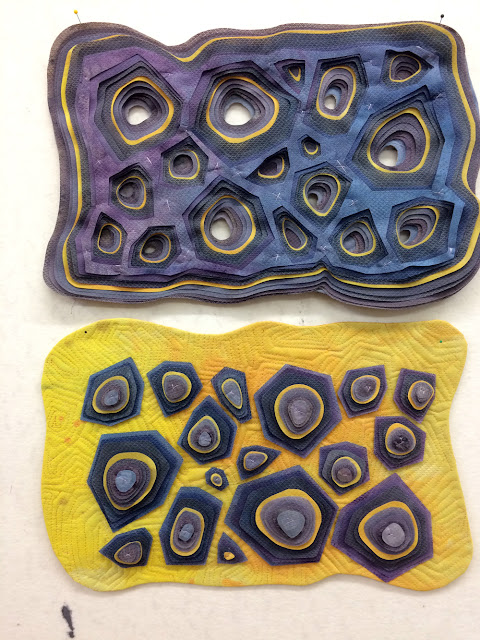 Unfortunately, I think I cut it down too much, and now the yellow base panel looked even weirder to me.  I tried all different ways and orientations I could think of to arrange these two panels in a way that didn't feel forced, but had no luck.  I even experimented in photoshop with the idea of cutting the yellow panel in half and displaying it on either side of the other one, but nothing looked right.  In retrospect, maybe I should have considered painting the yellow base a different color rather than cutting it down, but oh well, live and learn. 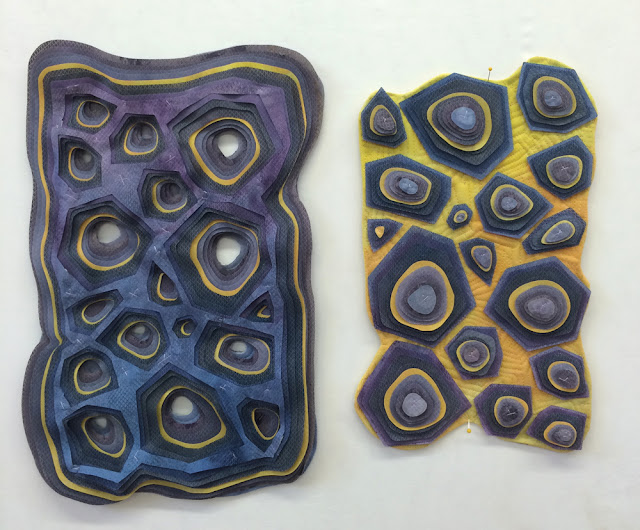 After much uncertainty and frustration (since I really had wanted this piece to have both the innies- and the outies-) I decided to chalk the mountain piece up to a learning experience and let the frame piece stand on its own.

Mike took some final pictures for me and I was able to enter it in the show I was hoping for.  I doubt it will get in, but you never know unless you try! 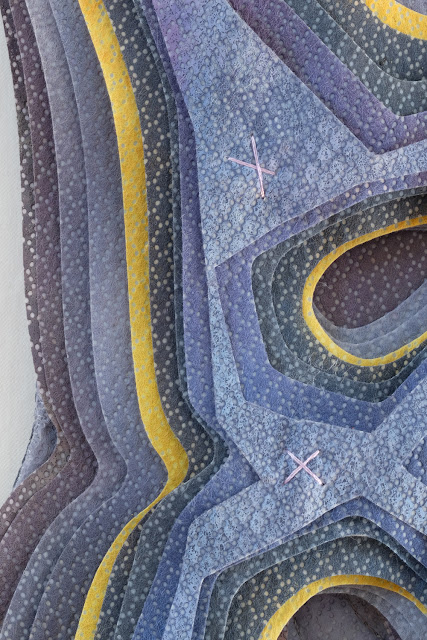 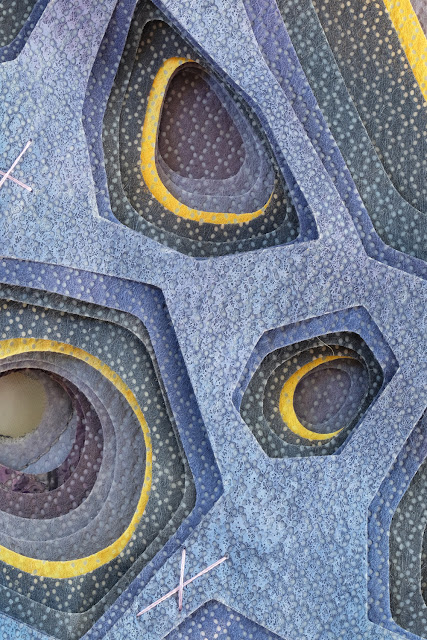 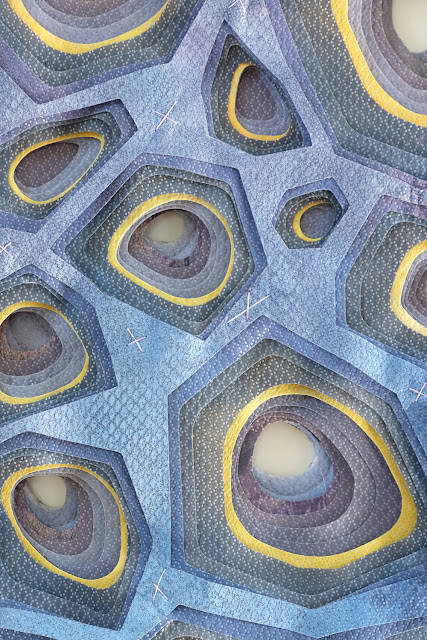 It's really quite small, only about 12 x 18.  The current artist statement reads "The flexibility of cloth and stitch lends itself well to creating motion and texture, and I'm interested in how the processes of layering and then taking away can create dimension and shape. Layer after layer is peeled away to expose what's underneath: organic openings that shift in shape, color, and depth. My art quilts begin with hand painted cloth and a machine quilted base, and then are layered and/or cut away, and anchored with hand stitching."

I definitely learned a bunch working through this process and already have some ideas for how to change it for the next time around.  I hope you've all had a creative week!

I'm linking up with Nina Marie as always!

Email ThisBlogThis!Share to TwitterShare to FacebookShare to Pinterest
Labels: Topography

I've been thinking for a while about the idea of depth and dimension in quilting.  At their most basic, quilts have depth from the multiple layers (front and back), from the batting, and from the texture given by quilting stitches.  In addition, I've been incorporating the idea of "taking away" or cutwork as another way to increase dimension in a lot of my recent pieces.  I'd been wondering if the opposite could also work-  that is, adding additional layers to increase dimension and depth.

Inspired by the 3D renderings and micrographs of viruses and bacteriophages (like these) and the concentric ring type design of a topo map, I built a multi-layered file in illustrator in which each layer could serve as a cutting template for my silhouette. 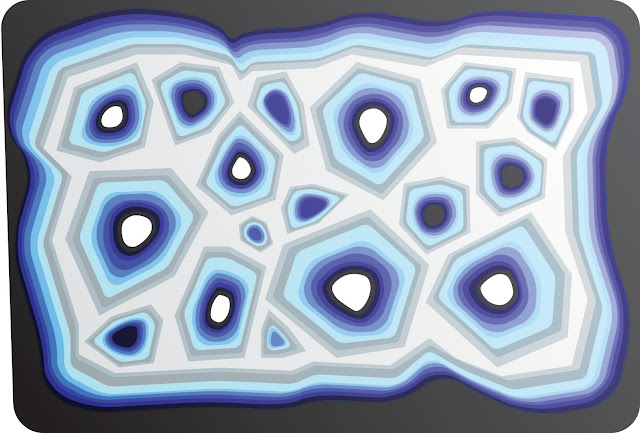 Because each layer would have cutouts, it was important for me to use some sort of non-fraying fabric.  Normally I would just seal fraying edges with my woodburner, but I really wanted this to have exact and precise edges so that each layer would line up, so a non-woven fabric was essential.  I also wanted something I could get fairly cheaply.  After looking around for a while, I settled on a non-woven from my local awesome upholstery supply store.  The owner called it remay, but it doesn't have quite the same consistency as other fabrics I've seen called that.  It's basically the stuff used to cover the bottoms of upholstered chairs or the tops of box springs.  I got ten yards of it in white, and then painted it.

I used the latex paint left over from this project so the dark grey-blue-purple color scheme may feel familiar.  I also decided to include a pop of yellow and used up some old acrylic pain I inherited from my grandmother.  I painted each piece of the remay, and set them to dry on some recycled plastic.  I mostly just didn't want to waste the plastic, but leftover stuff on the plastic from previous projects gave some of my pieces fun and unexpected texture! 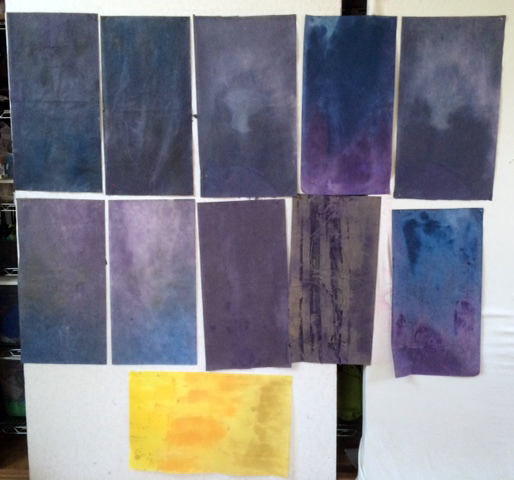 After cutting all the pieces out, I had to decide how to stack them up.  I started by quilting a base for each panel using extra painted pieces and then started laying out my cutouts.  I started with the "mountain" piece.  I wanted to have a lot of depth in the piece, and when I just piled up all the pieces, they still looked pretty flat, so I decided to put a small piece of heavy duty peltex between each layer.  I had to stitch them all by hand since the layers quickly got way too fat to fit under my sewing machine.  It was quite a challenge to figure out how to keep the pieces straight and lined up correctly.  Even more challenging was physically stitching through everything.  Stitching through a quilt sandwich is fairly easy.  Stitching through a quilt sandwich plus a layer of fabric and a layer of peltex is also fairly easy, but by the time I had ten layers of peltex and ten additional layers of fabric, I could barely get the needle through.  It was definitely a project for multiple thimbles and many many broken needles.

In the bottom picture you can see many of the "mountains" only have a few of their layers stitched down.  Each layer had to be stitched down separately because the top layers are so small that if I'd just stitched through the center (to get all the layers at once) the bigger bottom layers would shift around too much and not stay in the right place.

I got them all finished (yay mountains!), and now I'm working on stitching the other panel, the "canyons" which is a whole different kettle of fish with it's own set of challenges.  I'm trying to finish this for an entry due very very soon, so hopefully I'll have another update next week. 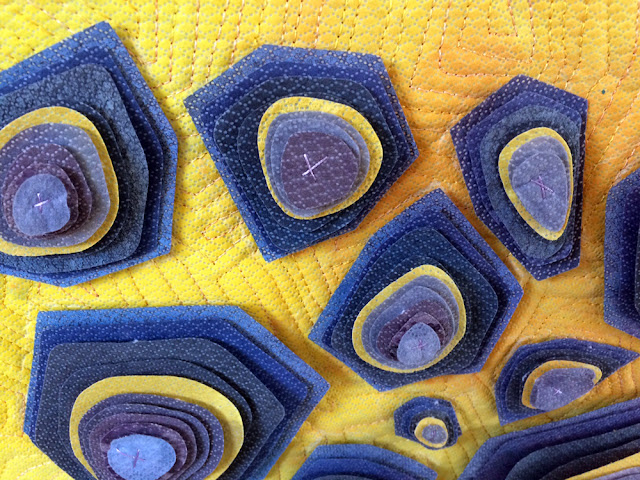 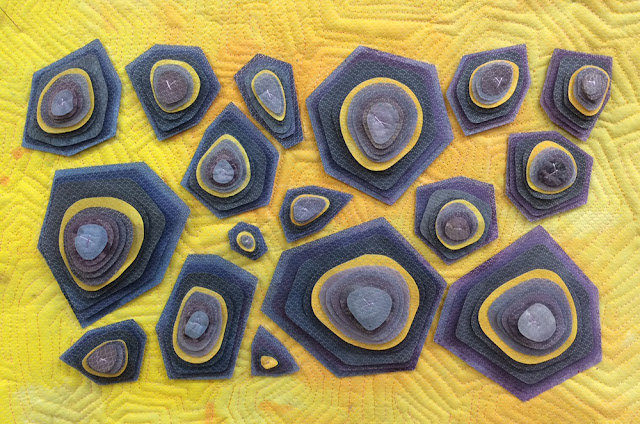 When you look up close you can see the texture in the fabric- it's almost like paper towels, but it feels much sturdier, not like paper at all.  In person it's kind of fun to look at since not all the "mountains" have the same number of layers, so some are shorter than others.   It's been fun working on this and definitely a learning experience!!

Linking up as always with Nina-Marie.