The SAQA Benefit Auction is coming up, starting at 2PM on September 16th.  There are over 400 12"x12" quilts available from SAQA artists; here are some of my favorites.  Click through to check them all out and consider bidding. 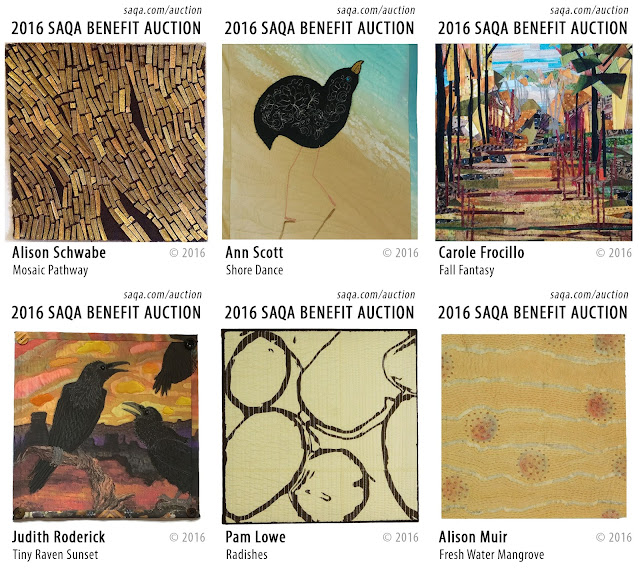 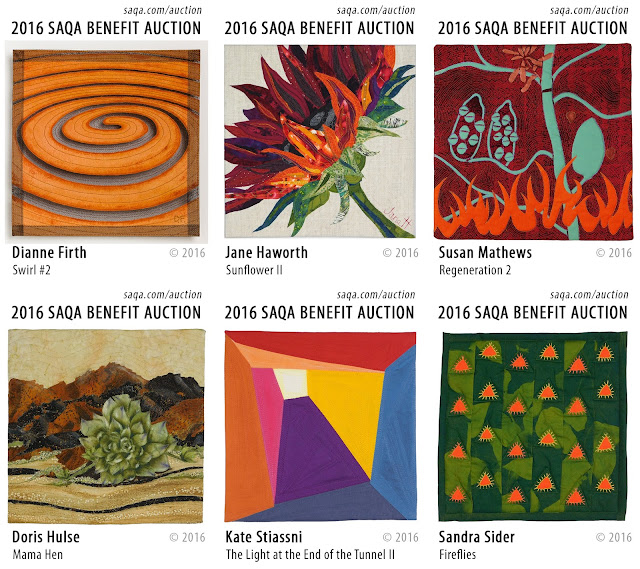 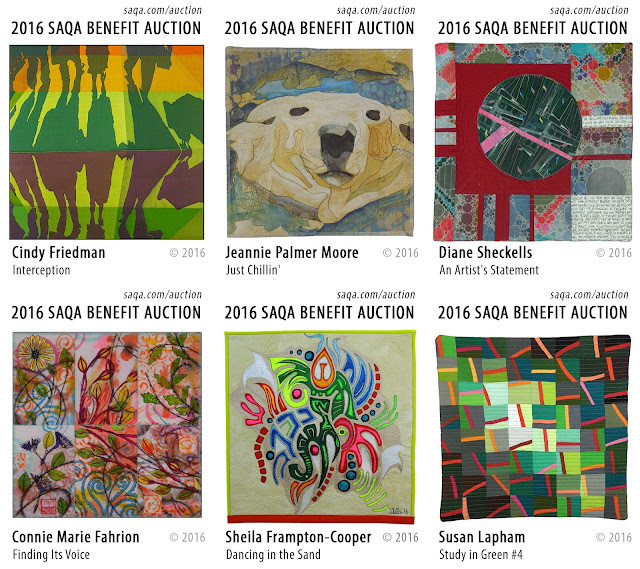 Posted by Shannon at 5:46 PM No comments:

I feel like there have been a bunch of "finally finished" posts on some of my big projects lately.  I don't think it's really the case, certainly I've been even less productive than usual recently, but I guess it's just how the posts shake out.

This quilt is one of my most long-running ever.  The first post about it was February 18, 2014, but the project had been bubbling in my mind since at least 2009.  This is one that's been "almost" finished for months.  You may recall back in June I realized that two of the large illuminated letters had been put on backwards, so I had to rip out a ton of quilting, carefully remove the initials, change their places and then requilt.  It then needed to be rephotographed (thanks Mike for all the pictures in this post).  Then came the pockets and labels (times 2 of course since there are two panels).  And then finally another large black pocket spanning both panels and sewn on top of the original pockets.  The large black pocket was required because the IQA judged show at Houston requires multi-panel pieces to be sewn onto a single pocket or black panel.  Although it was extremely annoying to sew on, I don't mind so much since the quilt got into the show (yay!).  Anyway, now it's actually finished finished, and writing up the blog post is the last step.

The quilt is an exploration of the intersection of science and religion and is part of an ongoing series of liturgical quilts I'm completing.  The central text comes from Eucharistic Prayer C, from the 1979 Book of Common Prayer of the Episcopal Church.  It is a slightly more contemporary version of an ancient prayer used before communion.  I have always been drawn to the science/natural history feel of the text. It says:

Lift up your hearts.
We lift them to the Lord.

Let us give thanks to the Lord our God.
It is right to give him thanks and praise.

God of all power, Ruler of the Universe, you are worthy of glory and praise.
Glory to you for ever and ever.

At your command all things came to be: the vast expanse of interstellar space, galaxies, suns, the planets in their courses, and this fragile earth, our island home.
By your will they were created and have their being.

From the primal elements you brought forth the human race, and blessed us with memory, reason, and skill. You made us the rulers of creation. But we turned against you, and betrayed your trust; and we turned against one another.
Have mercy, Lord, for we are sinners in your sight.

Again and again, you called us to return. Through prophets and sages you revealed your righteous Law. And in the fullness of time you sent your only Son, born of a woman, to fulfill your Law, to open for us the way of freedom and peace.
By his blood, he reconciled us.
By his wounds, we are healed.

I started thinking about God in the world, the evolution of life on our planet, and those who use their talents to study the world around us.  Thus instead of saints, the illuminated initials contain pictures of notable scientists.

Likewise, instead of depicting biblical stories or other scenes from the life of the church, the borders illustrate the evolution of life on our planet.  Starting along the top are "galaxies, suns, and the planets in their courses" along with sections of a Louis Pasteur quote expressing the idea that science can bring us closer to God. "par la science qui rapproche l'homme de Dieu" 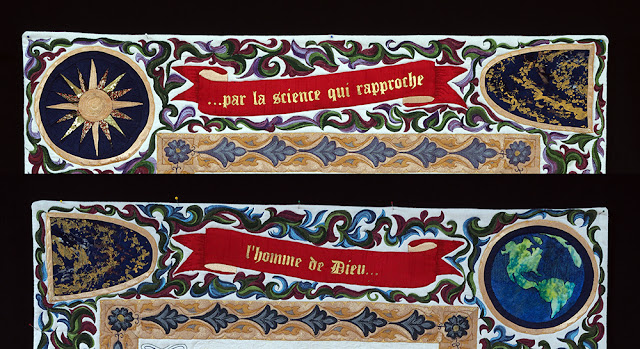 Working around the quilt counterclockwise, the bottom right border features a variety of creatures from the Cambrian explosion (~544 million years ago [Ma]) on the right.  These include everyone's favorite trilobite as well as examples of Hallucigenia, Opabinia, Pikaia, Marrella, and Aysheaia.

The middle panel shows two examples of more advanced, later undersea life.  The bottom is a Eurypterid, which is basically a giant (up to 8ft) sea scorpion which first appeared in the Ordovician period (~505 Ma), but was present for an extremely long time (all the way into the Permian period ~278 Ma).  The top animal is a type of early jawless fish called Cephalaspis which appeared in the early Devonian period (~408 Ma).

The left panel is my very favorite of all the "creature" panels, and is meant to depict early life on land.  Life spread to land during the Silurian period (~440 Ma), and features an example from the order Trigonotarbida, a small spidery creature.  Of course life on land means early plants as well, so the little bug is pictured with a fern.

The skinny borders along the middle of the two panels effectively function as one set of animals, all from THE AGE OF DINOSAURS (that should sound like a deep resonating voice over a PA system).  At the bottom is my old friend the Helicoprion, a shark species with a round saw blade-like set of teeth. Definitely check it out if you aren't familiar. Helicoprion actually arose in the Permian period (~290 Ma), survived the great extinction event at the end of the Permian, and continued living on into the Triassic period.  The middle panels feature our old friend Coelophysis, a carnivorous theropod dinosaur of the late Triassic and early Jurassic periods (~200 Ma).  The top is a Pteranodon, from the Cretaceous period (~144 Ma).

Back on the bottom (this time of the left panel) but continuing to work counter clockwise, I've included a Gastornis, a species of giant (up to 6 feet) flightless bird that lived during the late Paleocene/Eocene epochs (Paleogene period, ~60 Ma).  The center features a wooly mammoth from the Pleistocene epoch (first diverged from other mammoths ~400,000 years ago).  The final piece of the puzzle is people, and the bottom corner shows my version of Adam and Eve, sitting at the base of a symbolic tree of life.  They're reading On the Origin of Species, and the rest of the tree of life that runs all the way up the left side is filled with a variety of Darwin's finches.

I think most of the story of this quilt will probably not be evident to those who just view the quilt, but all the pieces were integral to my design idea, I wanted to explain them here.  After finishing this highly planned, quite precise/realistic/involved quilt, I'm looking forward to working on some other more abstract and free-flowing pieces.  I'll be called back to this series at some point though, so I'm sure there will be more illumination-style work in the pipeline.

What are your long-term-in-your-brain-forever projects?  Have you finished some of them?  How did that feel?  Were you happy with the outcome and how it matched what you had in  your head?

Linking up with Nina-Marie, and TGIFF.

Something new, something free-flowing, hopefully something fearless.  I've been painting and blending, big arm strokes and runny colors.  Petals. 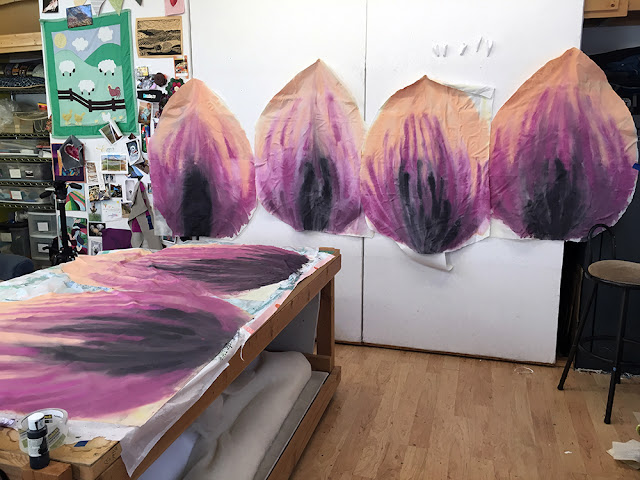 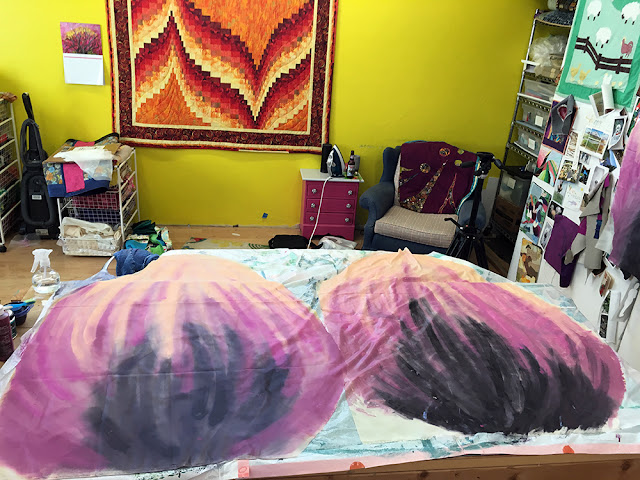 Posted by Shannon at 1:53 PM No comments: