I haven't written a progress-update post in a while, mostly because I haven't been making much progress!  When I got back from Seattle last week I spent a fair amount of time cleaning up the studio in anticipation of really digging back into my various ongoing projects, and as testament to how long it's been since I've really gone through things, the pile on my "most current things" table had unaddressed stuff from early March...

I got it all cleaned up and have since been working away on my dog portraits which I'll talk more about in a minute.  I do somehow seem to have gotten a bunch of unfinished projects tacked up in mid-completion.

So, no progress this week on:
Armadillo Whole Cloth (this is just for practice FMQ)
Orchard Quilt (I'm about 1/3rd done quilting this)
Mountains (This just needs binding/pocket/label, but I'm still not totally satisfied with the large green foreground mountains, so we'll see what I decide)
Rainbow Star (The next step on this is piecing the piano key border)
Mammal Medallion (This is my next big art quilt, still in the early design stages)

I have been working hard on the dog portraits- I'd originally wanted to finish them by the end of this month to enter a show, but I really don't think I'm going to make it.

Since I last posted I finished the thread painting on the Pumpkin dog and layered the Pumpkin dog and the Bullett dog for quilting.  I stretched/ironed them out as flat as I could (Bullett had been stapled to a blocking board for months anyway), and layered them with two batts.  I used wool batting since that's what I have right now.  I put two batts because I thought that might help with any distortion in the top from the dense thread painting and that it might give a little extra weight to help with hanging.  I hate seeing quilts that don't hang straight and flat (and mine often have that problem).

I'm quilting each dog separately and then am going to mount them to a separate quilted back piece (kind of like pinning a picture to a bulletin board).  More on that when I get to it.  I quilted the "dog" part of Bullett and Pumpkin using clear monofilament (since they're already so covered in thread from the thread painting), and was pleased with how they flattened out. 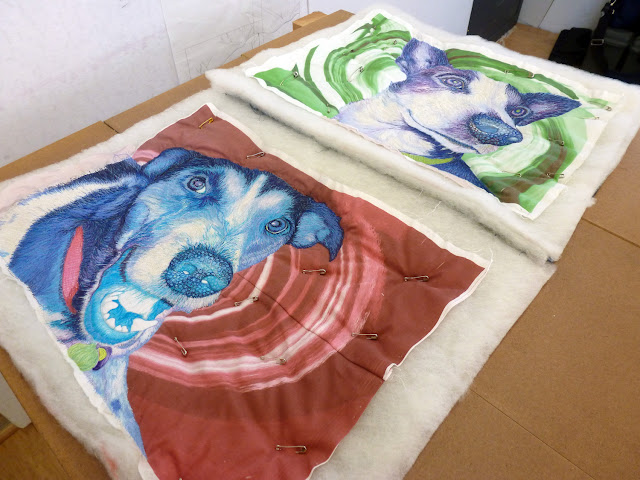 I decided to wait to do the backgrounds until I've thread painted Missy since I'd like all the backgrounds to look consistent and I think I'll have a better chance of that if I quilt them at the same time.  So in the last couple of days I've been working on Missy.  Slow going with all the thread changes but I think she's looking good so far (the weird circle is where I had her hooped). 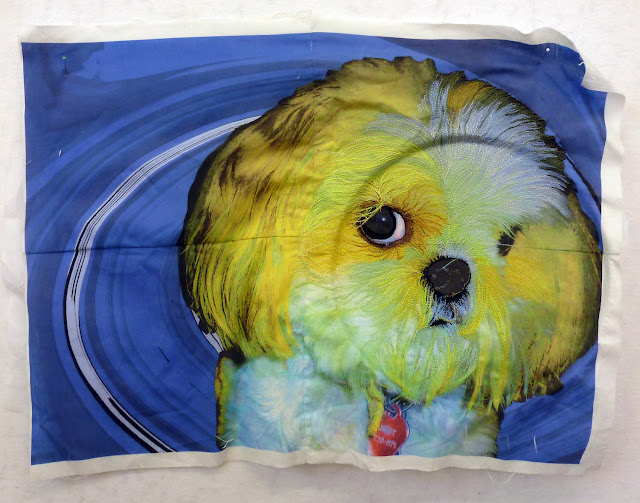 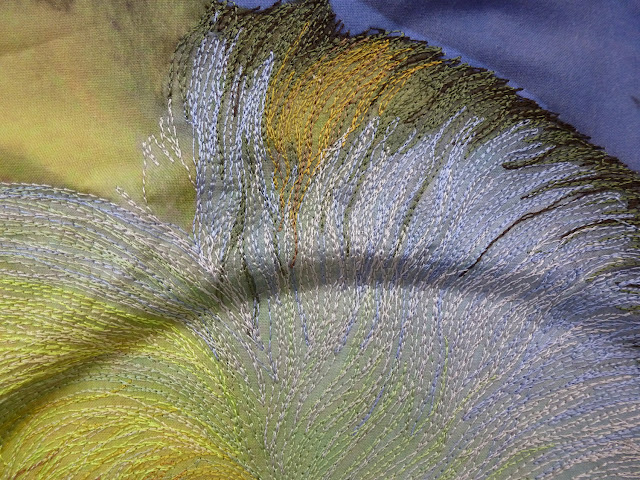 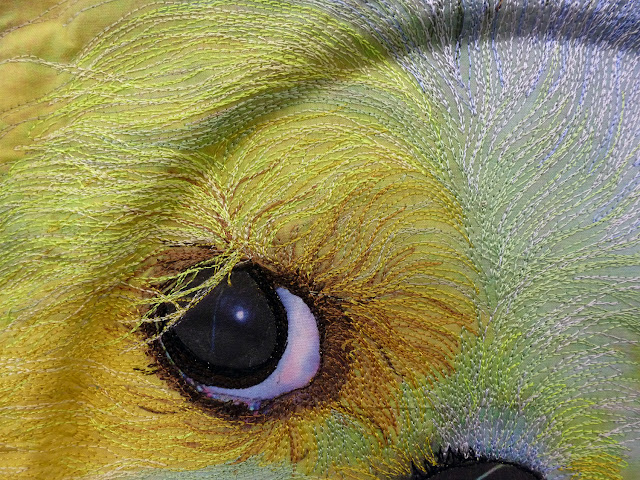 I've noticed that the thread painting on Pumpkin is much more dense than that on Bullett (who was finished first a couple of years back).  I'm trying for a happy medium on Missy.

No Link up at Lee's this week, but I'm going to be sharing over at the fabulous Nina-Marie's.
Posted by Shannon at 8:00 AM 7 comments:

Many of you have sent me very kind e-mails, thank you very much.  We're ok, the tornado hit about a mile north of our house.  Please keep everyone in your prayers though as rescue workers dig through the rubble looking for people still missing and those affected cope with loss.
Posted by Shannon at 10:27 AM 4 comments:

MQS was in Wichita this past weekend and I went up to see the show.  For those of you haven't been before, it's a show highlighting machine quilting, most (although by no means all) of the quilters who enter are professional longarmers.  The quilts are just outstanding, machine quilting (and piecing/appliqueing etc.) like you would not believe.  I'm always in total awe, and this year was no exception.

Anyway, they do have a small division called Just For Me for non-professionals who enter, and this year Seymour won best of show in that division!  The prize was a new Bernina 450 kindly donated by Midwest Sewing Center in Wichita.  I've never owned a Bernina before and I'm super excited.  Since it doesn't have a very large space under the arm, it won't replace my beloved Janome 7700, but I'm thinking about getting the embroidery unit for it and trying my hand at machine embroidery.

It was so cool to see Seymour hanging there on the row of "big winners".  He looks so small as all the other winning quilts were huge and gorgeous.  There were six big winning quilts, I couldn't get a picture with all of them at once. 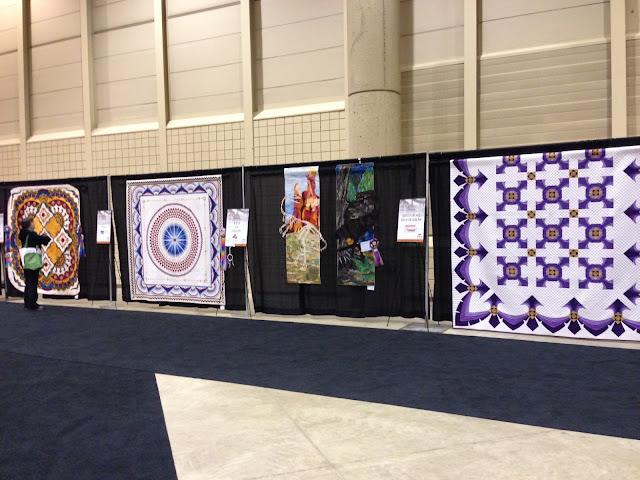 I guess next year I have to move into the bottom of the professional division!  In other exciting news, Seymour is going to be part of one of the Special Exhibits at IQF Houston this fall, so keep a lookout for him if you're there.
Posted by Shannon at 10:42 AM 4 comments:

Last week I was in Seattle for the big annual conference for vision researchers (I'm so thrilled it wasn't in Fort Lauderdale again), and the week before that my mom and I went to the annual SAQA conference held in Santa Fe.  I have lots of rambly thoughts about that trip which are in an unfinished blog post somewhere.  I'm not sure if I'll post them here or not, but it was a great trip.

While there, I got talked into making a SAQA auction quilt.  Every year they auction off 12" x 12" art quilts to raise money for the organization.  I started with a piece of fabric left over from our sun printing project.  I shouldn't really say left over (thus implying I've completed all other associated projects), since I haven't yet done anything with the other sun printed blocks, but anyway....

This piece of fabric was actually red; my mom heard somewhere you could sunprint with setacolor (I think) so she painted it red and tried it out.  It didn't print very well, so I just mashed the piece of fabric around in our leftover sunprinting solution and layered a bunch of different negatives on top just to see what happened.

I'm sorry I didn't take a picture of the fabric before assembly, but it looked kind of cool with four layered jellyfish prints and an anemone print on a splotchy background.  I squared it up and pieced it into a spinning log cabin (anyone know the official name of that block?).  It's machine quilted and partially layered with three different kinds of tulle to give the impression of being underwater. 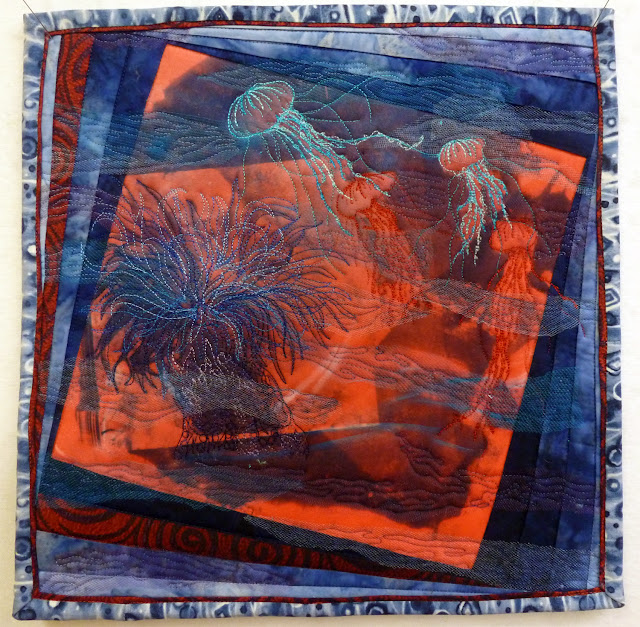 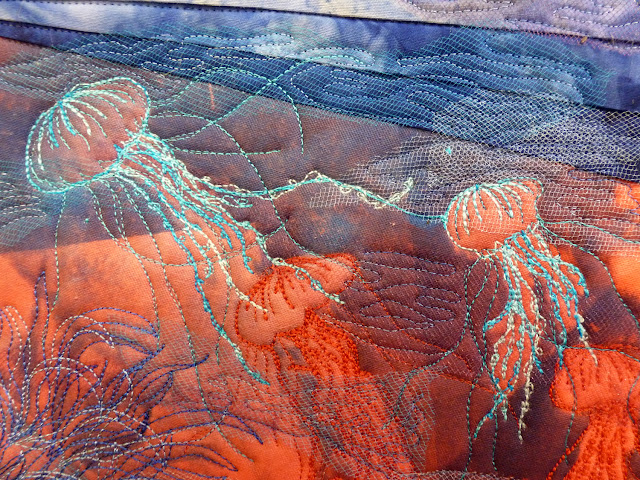 I love the jellyfish.  They're by far my favorite part.  I used several different colors and weights of thread and I think they turned out nicely. 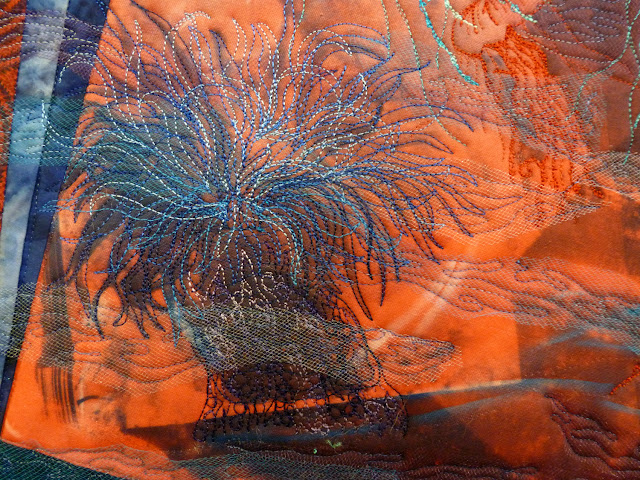 Overall, not one of my favorite pieces but I hope it can raise a little bit of money for SAQA!

Linking up with Fabric Tuesday over at Quilt Story!