The last week of I likes before Christmas.  I'm leaving on Sunday for a whirlwind 10 days visiting lots of different family, starting with my beloved sister and co.  I've been doing lots of crafting in the background but it's all for Christmas presents so I'll wait to share it till later.

1. I like my Christmas lights!  I never get very compelling pictures of them, but I love them all the same.  I set my light timer to come back on around 5 every morning so that I see them on when I go for my early morning walk and they make me happy every time we get back around. 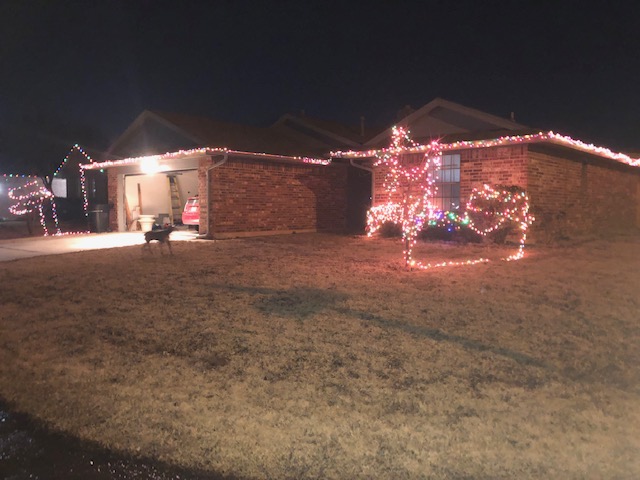 2. I love choral music!  Several of my good friends are part of the Norman Singers, a local Choral society, and I got to go to their winter concert this last weekend.  They sang Rutter's Gloria as well as a bunch of other Christmas and Advent carols.  There were enough familiar ones to be really heartwarming and enough new-to-me ones that it was super exciting.  Really wonderful event all around.  They held the concert in the First Baptist Church in Norman.  I'd never been there, and the sanctuary had some really beautiful stained glass! 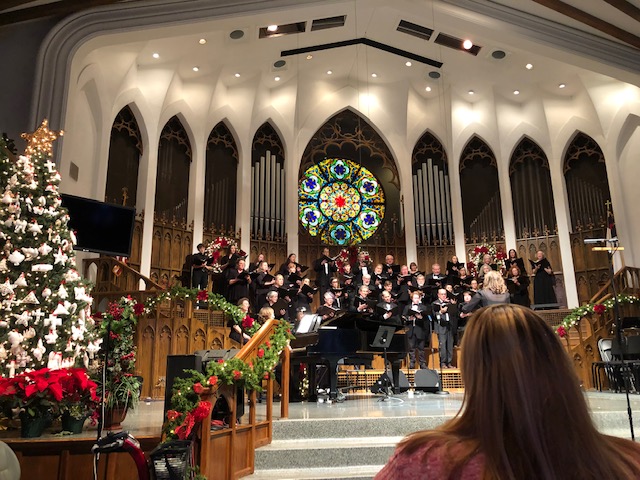 Merry Christmas to all of you who celebrate Christmas, and Happy Holidays to everyone else.  I hope you are warm and fed and with family and people that love you.  Special prayers and love to anyone who is struggling or lonely or ill or in need.  I'm so grateful to my online friends and my in person friends and my family (including the large furry monsters).  You guys keep me going! 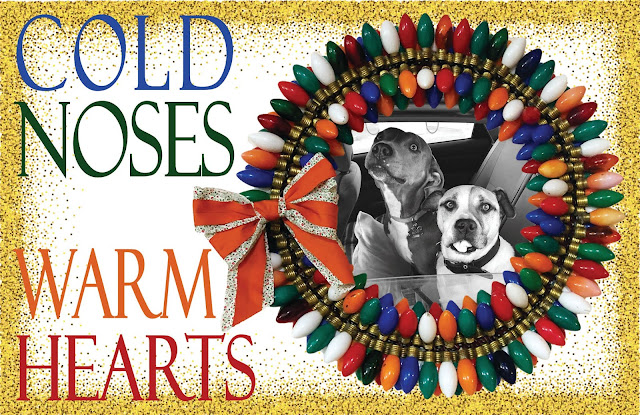 Linking up with LeeAnna, who keeps us positive every week.
Posted by Shannon at 9:10 AM 8 comments:

Another week of I likes.

So many wonderful things to like this week that I didn't get pictures of.  I love spending time with my friends,  and getting Christmas cards in the mail, and knowing that in a couple short weeks I'm going to be with my family.  I love making things for people I know they'll love and I love snuggling with my pups.  I love singing along to the radio and singing in the choir.  I love the getting ready.  Many years, I love the getting ready even more than Christmas.

1.  I love my pups!!  They were waiting so very (not quite) patiently for me to get their leashes on before the walk this morning, I just had to snap a picture. 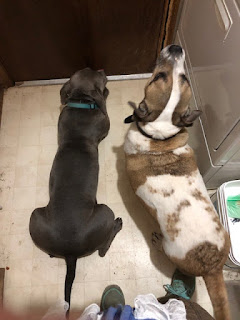 2.  My Christmas cacti are in full bloom.  I figured it would be good when I saw the big buds, but I'm always overwhelmed by their color. 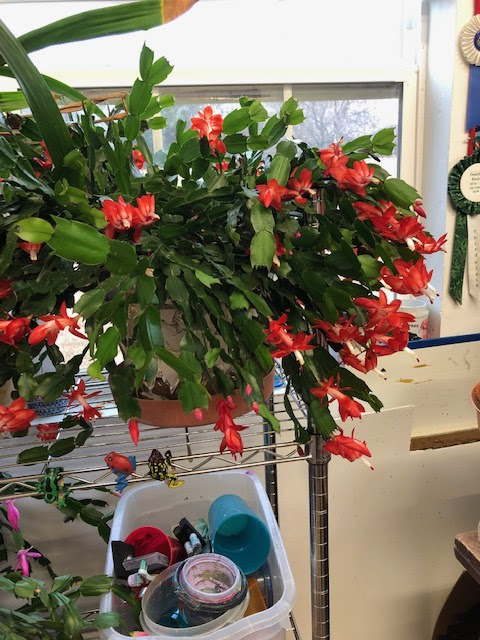 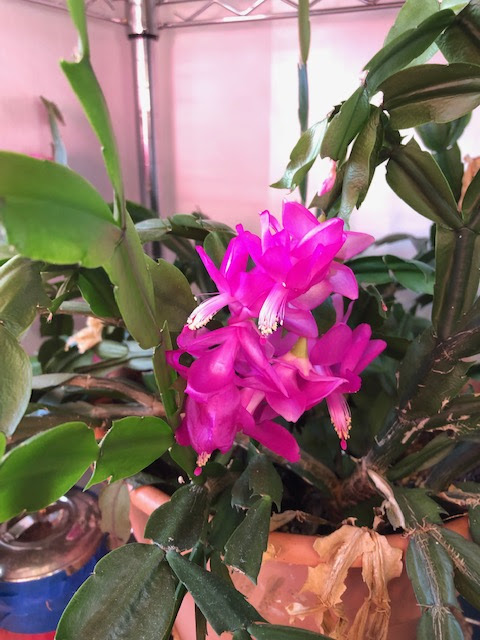 3.  I love our Christmas decorations at work.  They're hard to get good pictures of, but most of the people on our floor (it's sort of a catch-all floor with people from lots of different departments) get together and decorate and it's lots of fun. 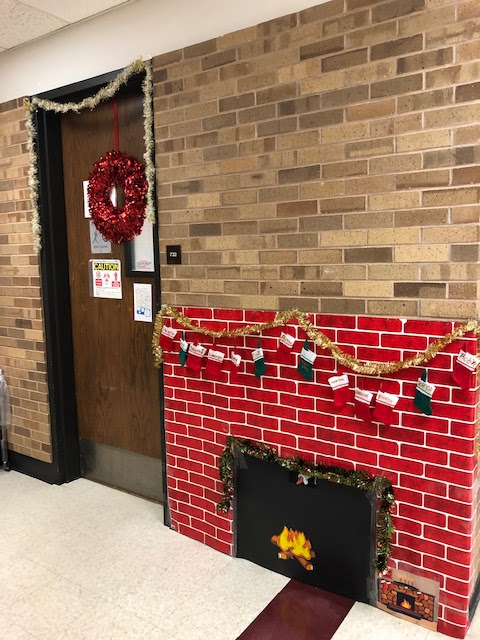 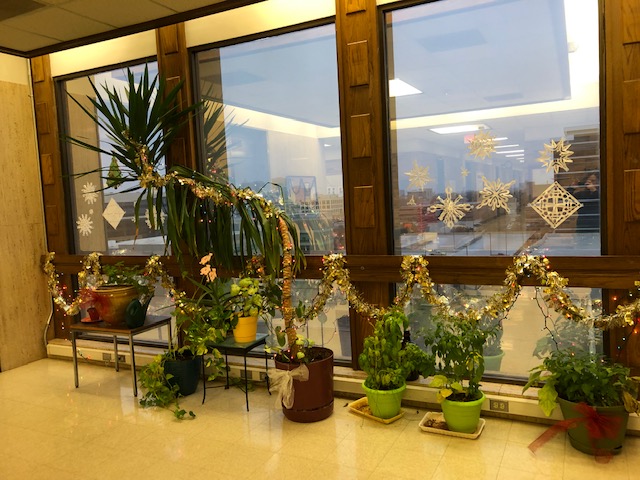 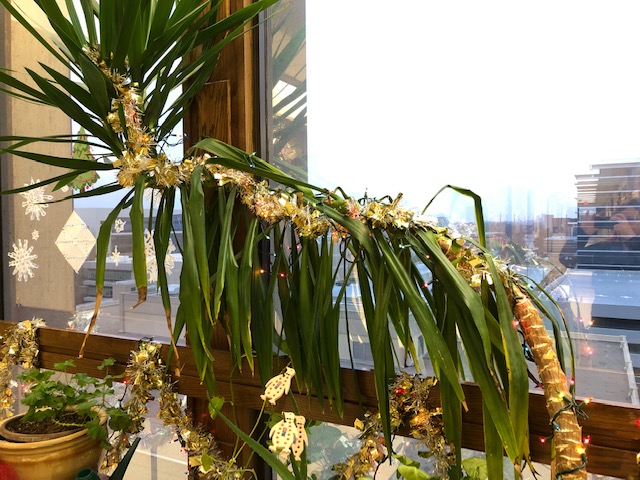 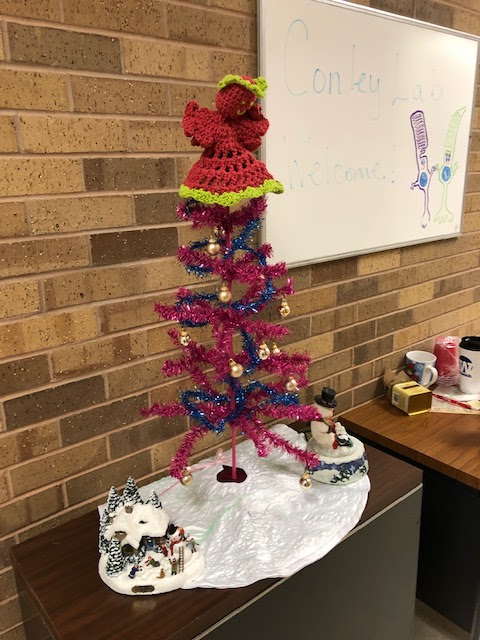 4. I love Liz Climo's cartoons.  They're super cute, and this recent one seemed especially relevant.  Big Sigh.  Definitely check out her work 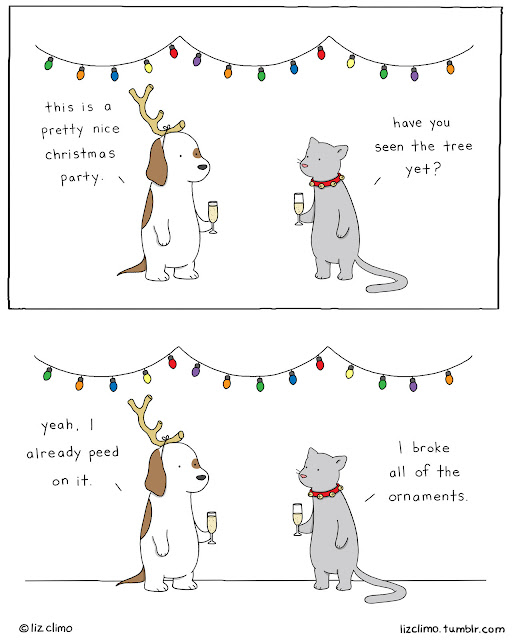 I hope everyone has a good week, and head over to LeeAnna's to see what everyone else is liking this week.

Welcome to another week of things to like.  I like this time of year in general, though my house feels strangely empty with no tree.

It's been cold here but no snow yet, which doesn't bother me at all.  The other day I was out walking a little later than usual and I got to see the sunrise.  It was subtler than it often is and I thought it was quite pretty.  I love the colors. I finished my neon knit socks right before Thanksgiving and this week I got to wear them for the first time.  They came out exactly like I wanted-  super 80s feeling!  I blogged about them here if you want to see more of them. 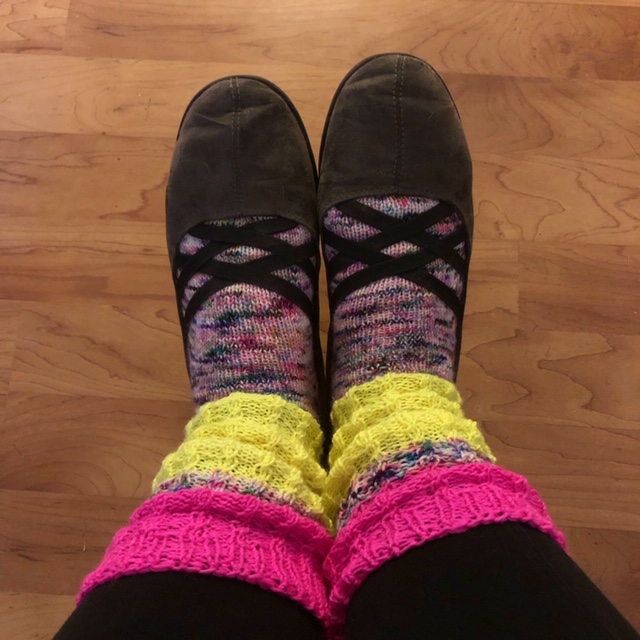 I also got to wear my new handknit socks from my friend Kristin for the first time!  She made them as a birthday present, but as my birthday is in July, it wasn't really knit sock time.  I love them too! 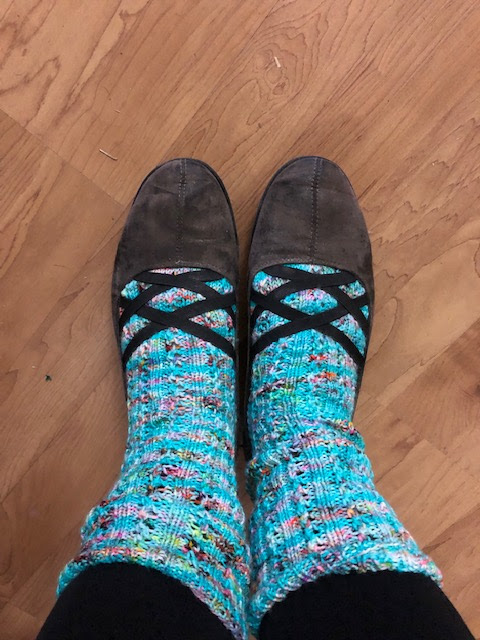 The buds on my Christmas cactus are getting bigger and very very intense in color.  They haven't quite opened yet, but I think it's going to be another great year for them.  I can't think of any other plant that gives as much color and beauty with so little effort. 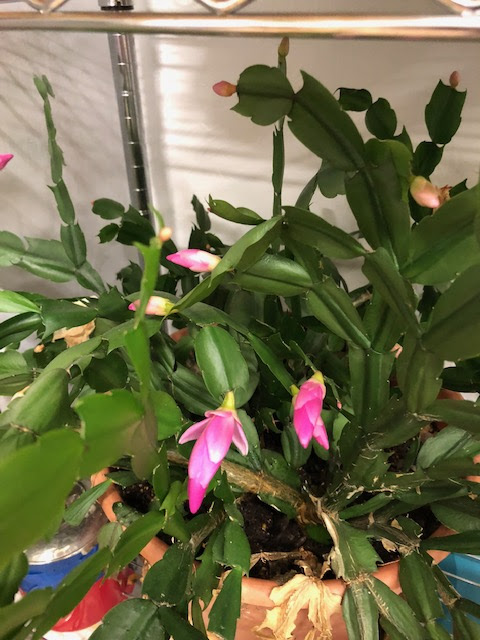 I was so happy to see Bentley and Blue playing together the other evening.  Bentley was the one who started it too which is great since he's often an old fart.  They were super frisky, but of course stopped as soon as I picked up the camera. 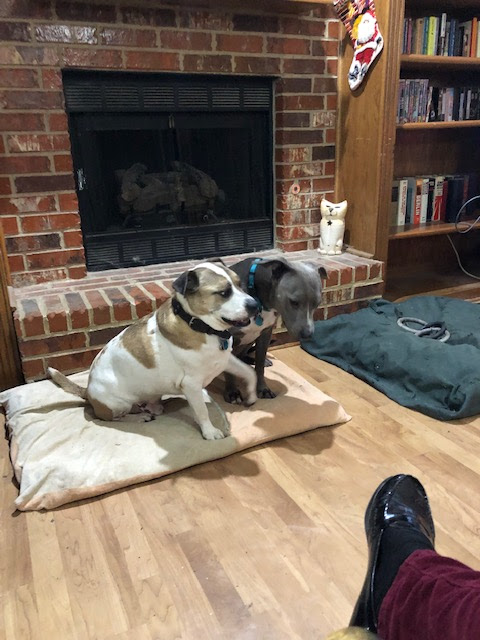 Blue is allowed on the sofa but not the bed.  But almost every morning when I'm in the shower he hops up there because he knows I can't see him.  Alas, the tell-tale bed disturbance and giant plop of him getting down are sure signs he's been at it again.  Such a big dork. 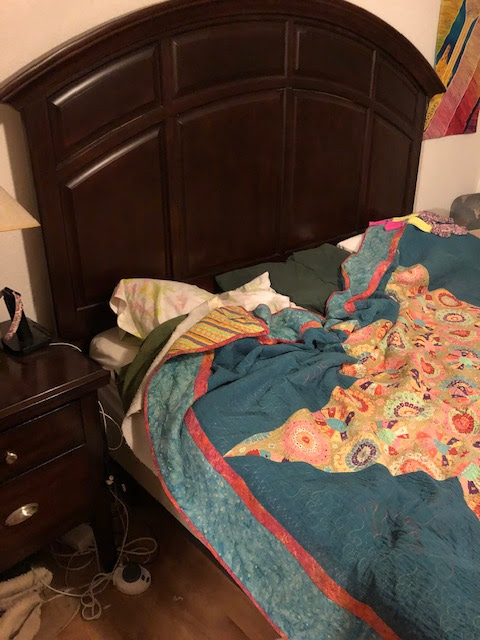 I did some Christmas crafting this week too.  I had to retire my beloved C9 lights after they kept blowing one fuse after another.  It was sad, but probably time to switch to LEDs anyway.  They certainly make me less nervous.  But I couldn't bear to throw out all the C9s, so I decided to make a wreath!  I just have to be careful-  if I ever drop it it would be a catastrophic mess as those bulbs are super fragile glass. 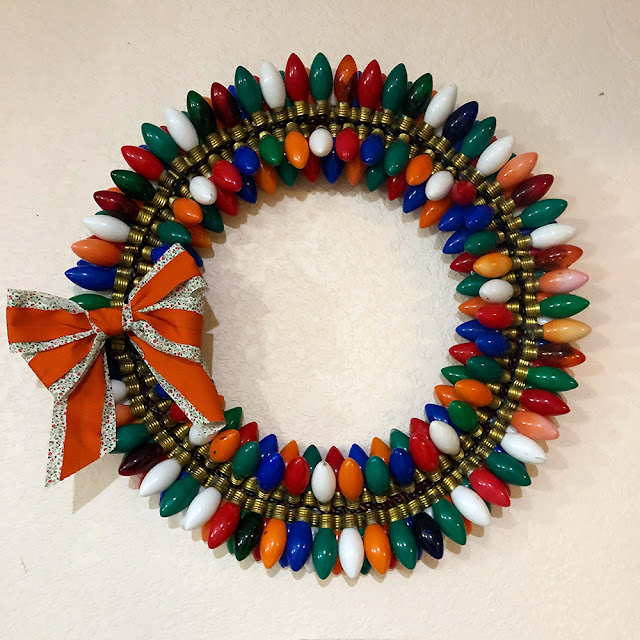 I hope everyone else is enjoying December!  Thanks to Lee Anna for linking us up!
Posted by Shannon at 9:32 AM 12 comments:

You guys-  I'm so excited.  I finished my knit socks!!  I actually finished them right before our recent trip to Florida (which was my goal), and I'm so thrilled with how they turned out.

You may have heard me say for years around here that I'm not a knitter.  Well,  I think I'm a knitter.  Alas.  :)  These were the socks I first made about ten years or more ago.  I made one of them actually, and disliked it so much that my mom caved in and made the other one.  But this time I enjoyed it way more.  Hooray. 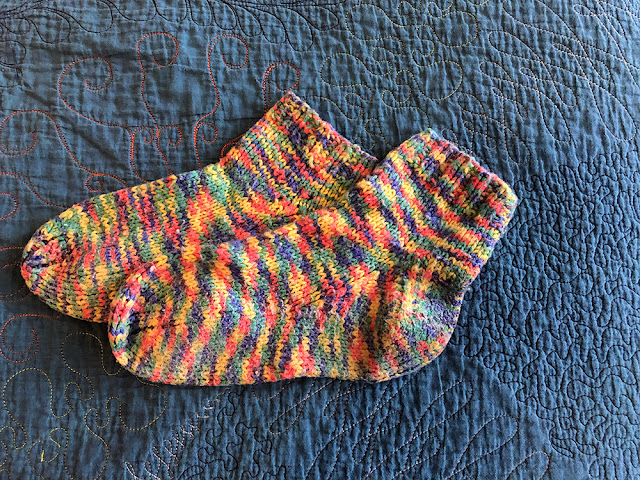 I knitted them toe up under the guidance of my friend Melody and I really like that method.  I was just estimating how big they should be based on a pair of hers I tried on, and I think next time I'll use a few more stitches.  They fit, and the leg section is really stretchy, but they're a bit snugger than I'd like. 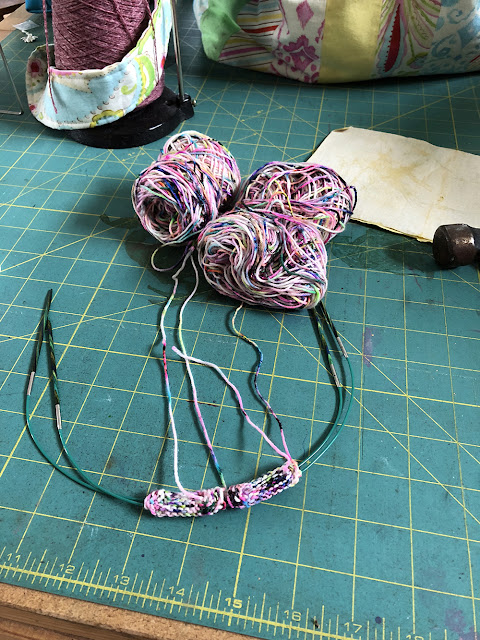 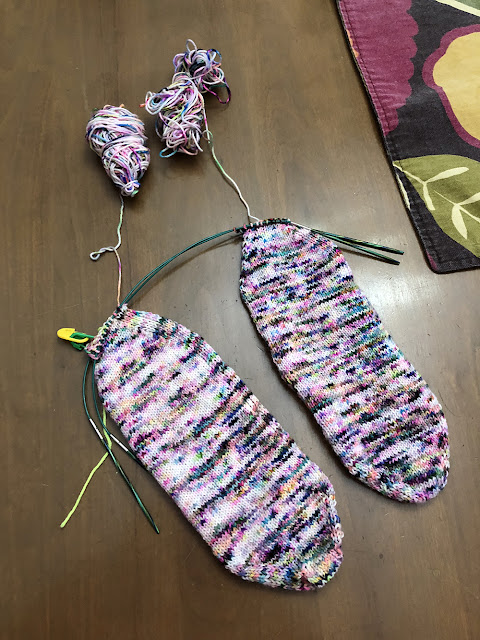 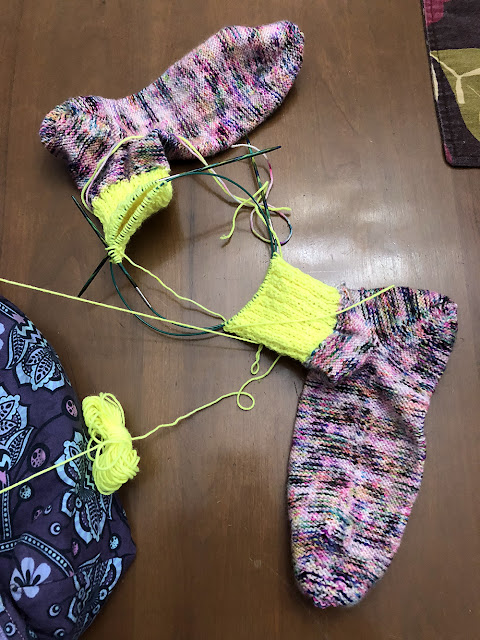 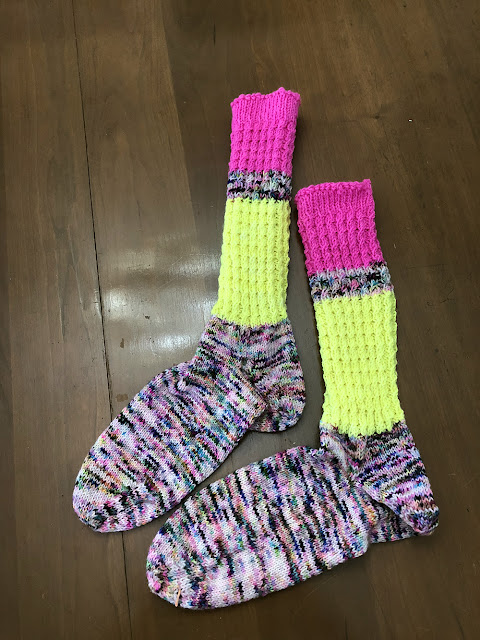 I did this very easy faux cable on the leg,  it was nice because it made me learn a couple of new stitches (like purling and some weird back and forth stitch thing) but was simple enough that I didn't have a hard time keeping track. 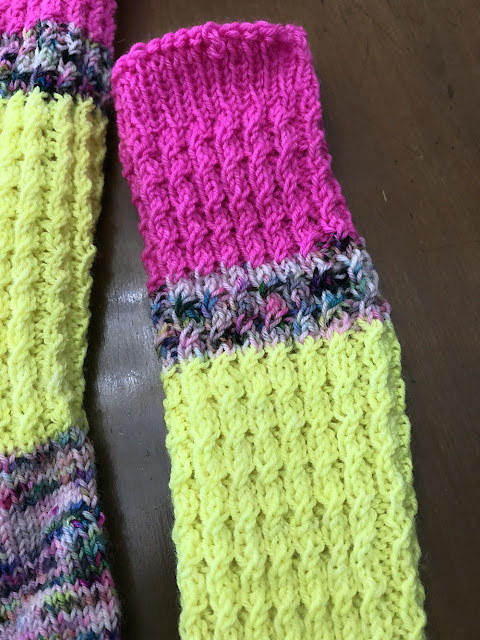 After I switched to speckle in the leg, Blue did this to my yellow yarn.  Complete with bits of backyard mixed in for fun. 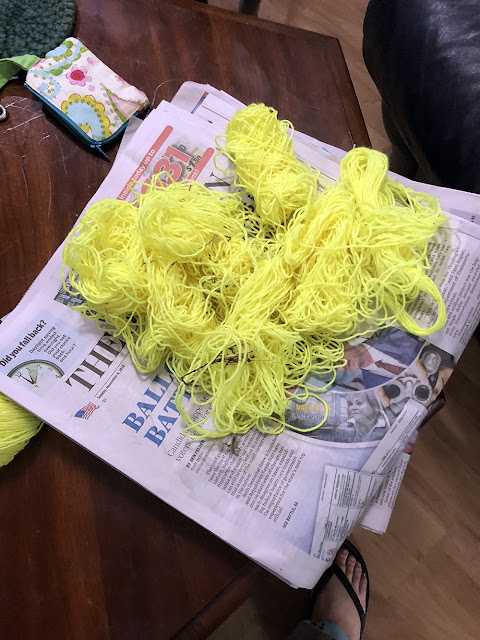 My goal was to use the leftover yarn from making this shawl, and I had plenty for the socks.  All the speckle is gone now, but I still have a bit of pink and a lot of neon yellow (see above) left. So now I have happy neon knit socks to go with the knit socks my friend Kristin and my mom have made me.   Hooray for knitting! 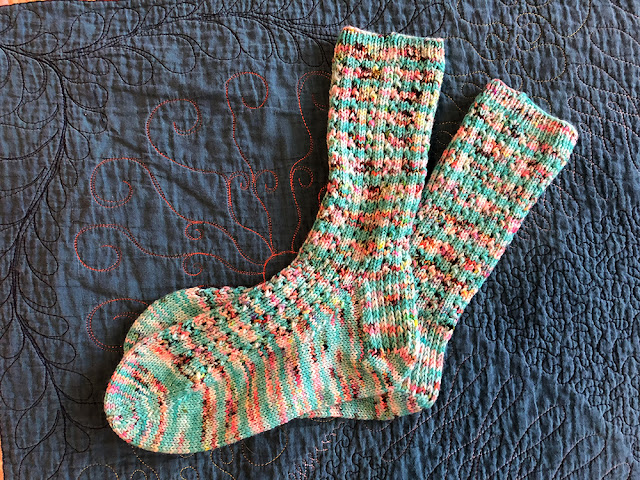 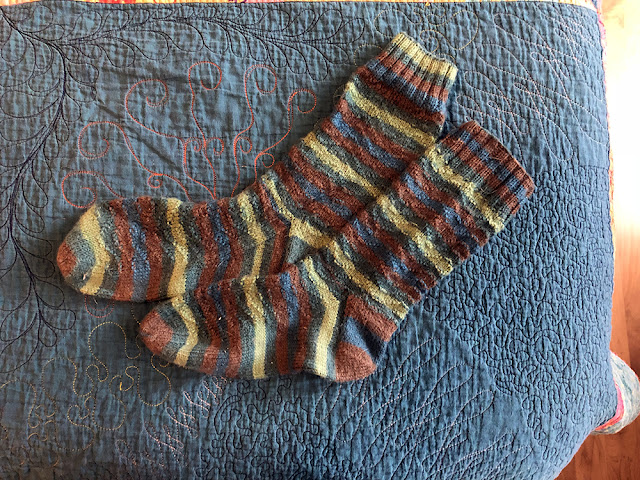