As I've mentioned, I was lucky to get to take a 5 day workshop with Jean Wells Keenan at Asilomar this spring and it was a really great experience.  Her work includes lots of intuitive piecing, two things (working intuitively and piecing) that I'm generally terrible at, so it was a great opportunity for me to get to push myself to try new things.

We were to bring inspirational pictures, and the class was called something like "abstracting from nature" so most people worked from nature pictures.  However, as much as I love the outdoors (especially at asilomar) I wasn't feeling that vibe.  Rather my inspiration and pinboards lately have been filled with bold, graphic, sculptural art so I brought a pile of pictures in that vein.  Before going, I used this picture as a color scheme to help guide what fabrics I packed, so wound up with lots of blues, oranges and neutrals.  I really love this combination, especially with a few pops of saturated fuschia.  Yum.  I also liked the sculptural nature of those pants, but in the end used this beautiful paper sculpture as the jumping off point for my sketching.

The first part of the class involved exercises in color selection and the curved piecing technique that Jean uses.  That was really helpful to me-I love curves, but have always hated having to precisely match up seams and curves.  It was great to be able to piece freely along the curves.

After doing some initial exercises, we started sketching and abstracting.  This is where I really had to let go- typically I sketch/draw/design until I have a full pattern (either on paper or in illustrator) and then follow my pattern.  Here though I sketched and abstracted and sketched and cropped until I had some shapes that were reminiscent of the original inspiration, but really quite different.  Then I just started piecing-keeping a vague idea of the direction I wanted my curves to go, but otherwise just letting things build. 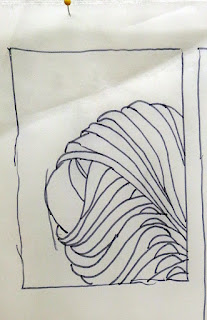 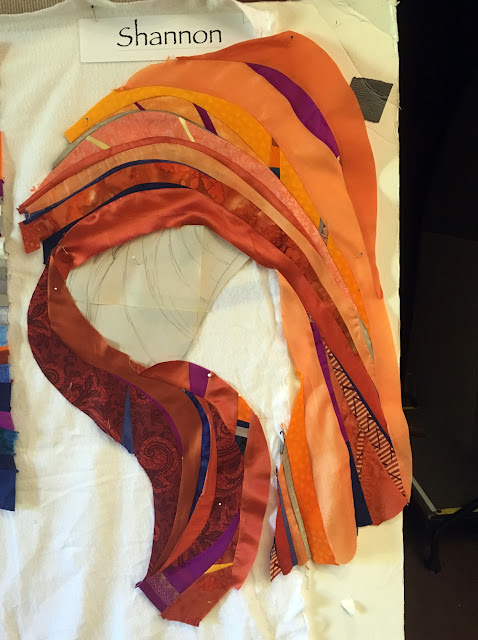 These were the first two sections I pieced.  You can see they're a little lumpy from all the curves, but judicious pressing and reseaming when irredeemable bubbles formed solved the problem.  I found this process of piecing curves worked great as long as I was willing to let go of any preconceived notions about making something that matched my pattern. 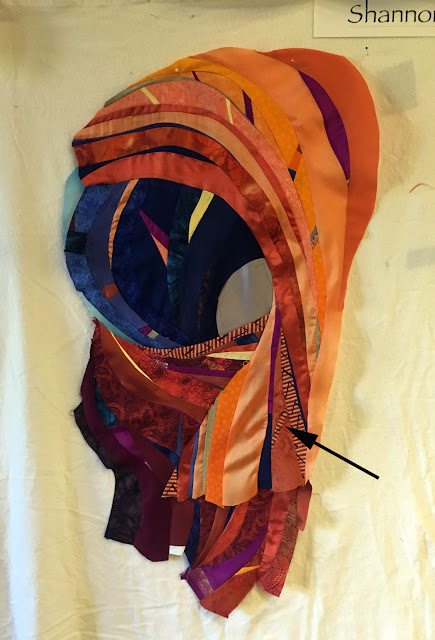 Here with the third inner set pieced and pinned up.  It was feeling a little top heavey at this point and there was a ton of "waste" where the two orange sections overlapped, so I cut off the overlap and auditioned a bunch of different ways to incorporate the piecing I whacked off. 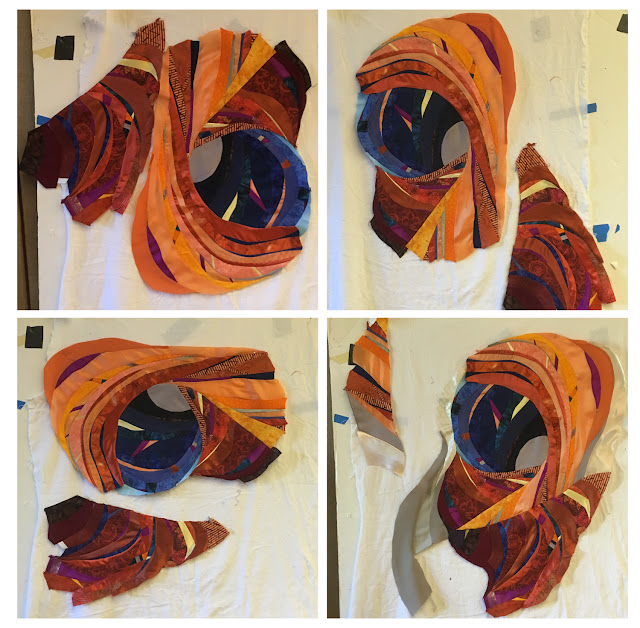 I settled on that option on the bottom right.  Once that was sewn on, there was another bit of light orange overlap to cut off, which I wound up positioning at the bottom left. 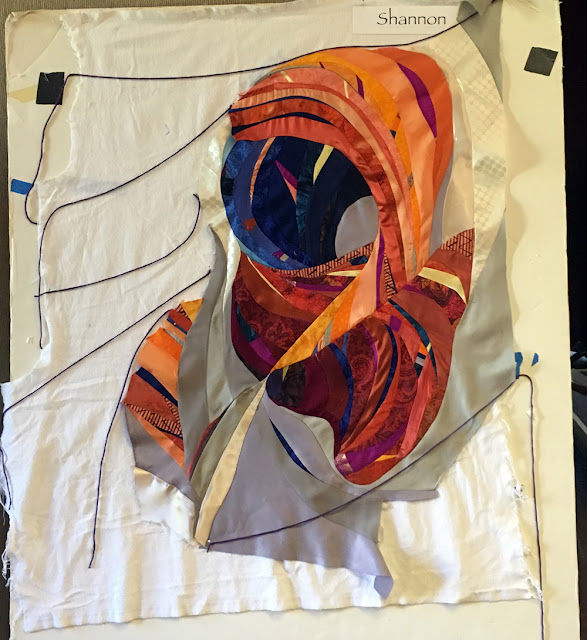 At this point I found that it had completely diverged from my original sketch and that it looked a bit like a person wrapped up in a scarf or shawl. One of the exercises we did in the class was to go around and leave one word about how all the pieces resonated with us.  My sheet had all kinds of great words from my classmates, many of which were spacey/science fiction-y in nature.  I thought it looked kind of like a Jawa, others suggested a still suit a la-Frank Herbert and Dune, and many others had additional sci-fi words.

The yarn lines are pinned up to help guide/audition the piecing and design lines in the background.  That was one of Jean's suggestions and I found it really helpful for deciding how to fill in all the background area. 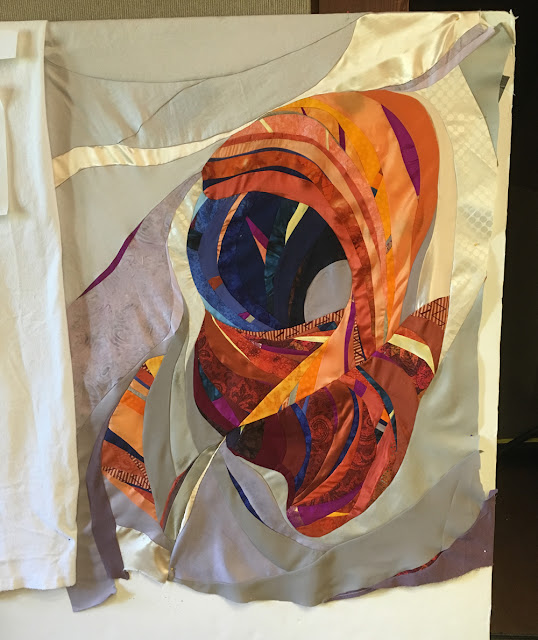 And here it is with the background pieced in.  This is how it is still, hanging on my design wall waiting to be quilted.  Originally the pale purple inside the blue circle corresponded to open space behind that paper sculpture, but as it's taken on a more figurative aspect, I've been wondering whether I ought to paint that central purple piece dark- maybe to look something like the picture below.  Thoughts? 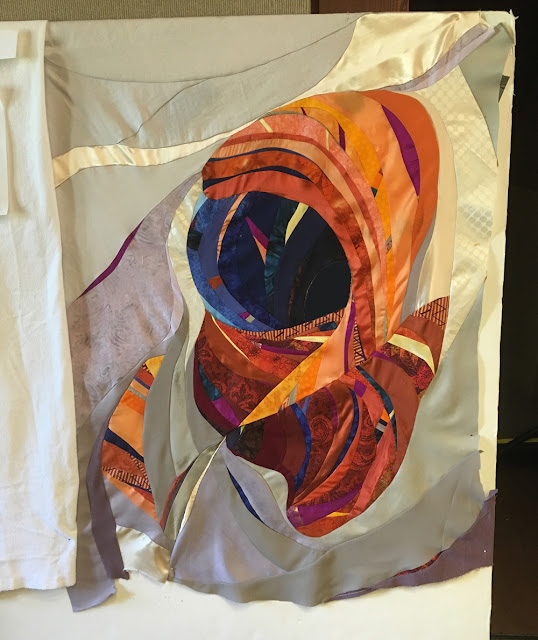 It'll be the next thing to finish, although I still have to decide how to quilt it.  I'm not sure how I'll finish it- I may cut it off square, but I might also decide to make uneven edges to reflect the curved piecing.  I'll wait to decide until after I quilt it.

A while back Urban Threads (my favorite source for fabulous machine embroidery designs) capitalized on the current trend of adult coloring books by issuing a coloring contest for one of their embroideries.  They released the Craft is Art pattern free and challenged people to stitch it up and color it in.

The contest call came right as I was about to start painting in the quilting on my large illuminated manuscript quilt, and give the weird fabric that quilt is made out of, I had planned to do some paint/ink/marker tests before nearing my quilt. It seemed like this was the perfect opportunity, so I made a quilt sandwich out of the same fabric as my quilt top, stitched out the design and started coloring in.

I'm so glad I did because the surface of this fabric is really weird-  it's a think polyester fabric with a suede like finish, and come to find out, many of the things I was considering using on the quilt bled outside the lines.  The bleeding was so bad that I wound up adding more color outside the lines on purpose to give a sort of watercolor-wash effect.

Things I tried that did not stay inside their lines-  cheap acrylic paint cut with water, good acrylic fabric paint cut with water (like setacolor), fabrico markers (so sad about this), inktense pencils (likewise sad about this), sharpie, latex paint cut with water.  I usually really like diluting my paint a little with water just to make it easier to get down in crevices around the quilting, but I really found that I had to use the paints completely undiluted  if I wanted them to stay put on this particular fabric.  I also used some oil based enamel since it gives better metallic, and the color on it stays put fairly well, but occasionally the solvent separates and bleeds out giving a weird halo sort of effect. 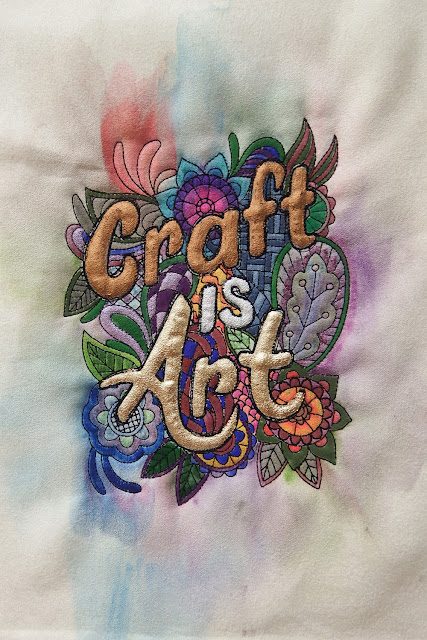 It was pretty fun to color in though, and after coloring it, I quilted the background with multiple colors of silk thread using motifs to echo the embroidery pattern and bound it using organza.  From a practical standpoint, organza is a pretty dumb thing to bind with (hard to iron, very ravely, doesn't crease well), but I really wanted a light, glowy edge and I think this accomplished it.

So now I have a new little mini to hang on my wall! 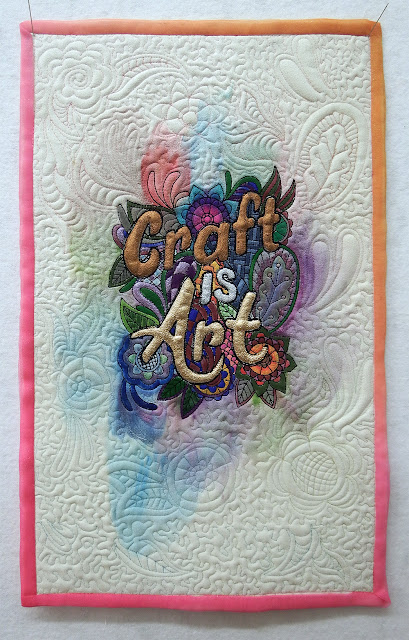 Have you guys ever painted/colored in embroidery or quilting?  If so, what media did you use? I find it fairly tedious, but have used it now a couple of times, including in my Gloria Patri quilt.

Anna's birthday was just a bit ago (she turned 4), and I recently saw this Silly Alien Beanbag project by one of my favorite bloggers, Mollie from Wild Olive.  I decided to make up a set for Anna, and it was a blast.

I did the mat a bit differently than Mollie, mine is grey fleece with a cotton binding and small moon craters appliqued on with rainbow satin stitch.   But really, the best part is the alien beanbags.  With their crazy eye and bright colors, you can't resist playing with them. 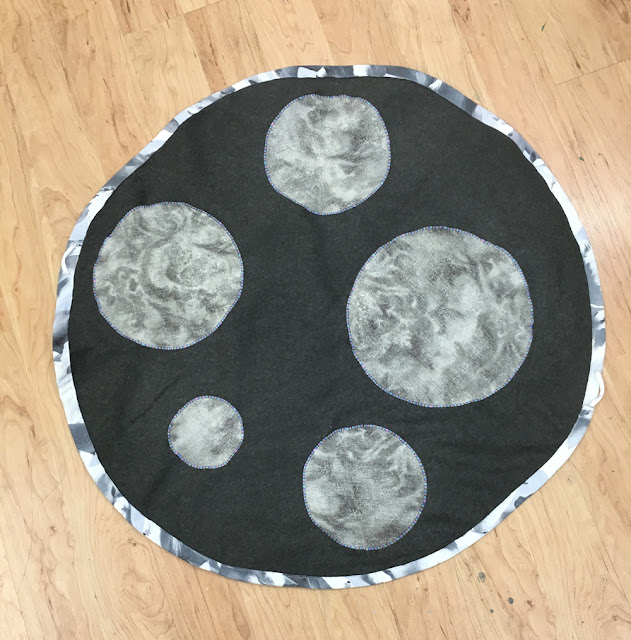 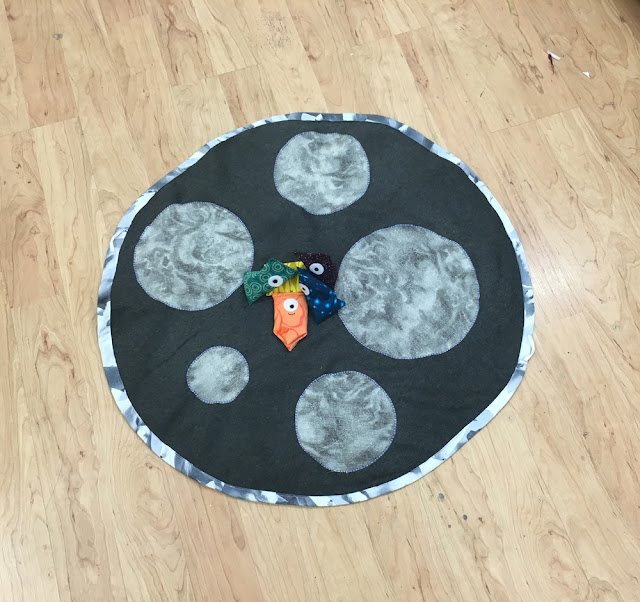 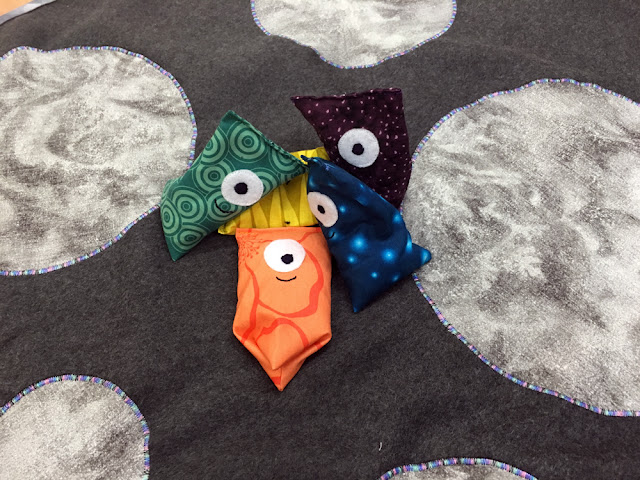 Anna and I played beanbag toss (can you land on the mat?  how about the big crater?  how about the small crater?) but even more fun was just playing aliens.  Alex wanted to get in on the fun too and we had a great time pretending to be aliens on all the different grey planets.  Thanks to Mollie for such a fun project!

I signed up for an instagram swap called #Bigstitchswap2 being hosted by the lovely Sarah and Cindy of FairyFace Designs and Fluffy Sheep Quilting, respectively.  I've had an instagram account for a while, but I never posted anything, so this was a fun chance to get to use it more.

The swap was for a small piece featuring some amount of hand stitching.  Some people were making pouches, or mini-quilts, or journal covers, etc.  I decided to do a clock, and because I've been on a hand embroidery kick lately, I decided to do some more of that.  Recently, Mary Corbet (of Needle'N Thread) had a sale on her fabulous PDF embroidery books and I picked up her monogram alphabet book.  It's really fabulous, it has great stitch pictures and descriptions as well as instructions for making the letters and suggestions for switching up stitches.  If you're at all interested in embroidery, her website is great.

Anyway, using it as a guide, I stitched up the following for my partner.  I started on the J, then decided it needed a bird, so I stitched that in.  Don't worry about the blue marker in the bird closeup, it's that water-erasable marker and is gone now.  Afterward I pieced the letter into a background, embroidered a clock face and some accent stems, and wrapped the whole thing around a set of 8x10 canvas-covered stretcher bars.  The last step was putting the clockwork in. 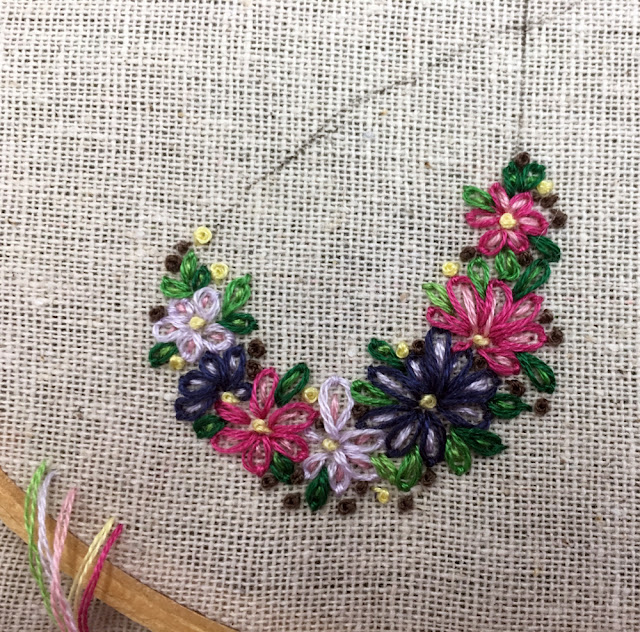 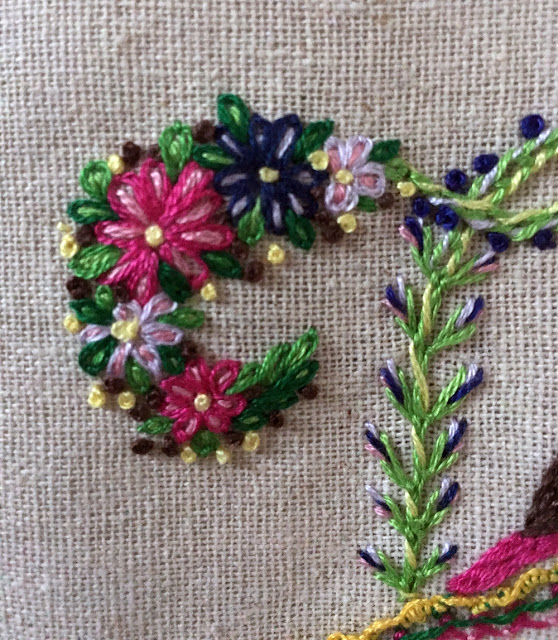 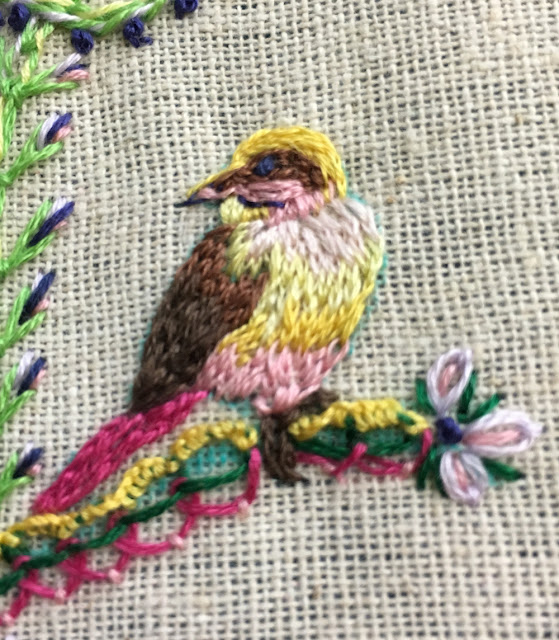 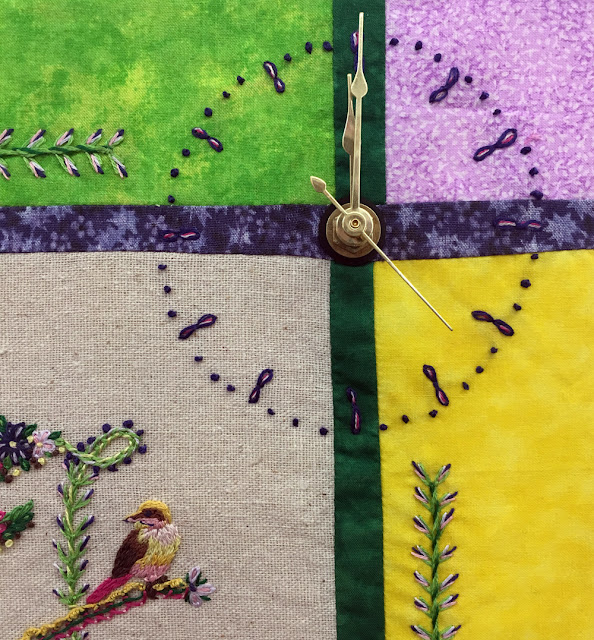 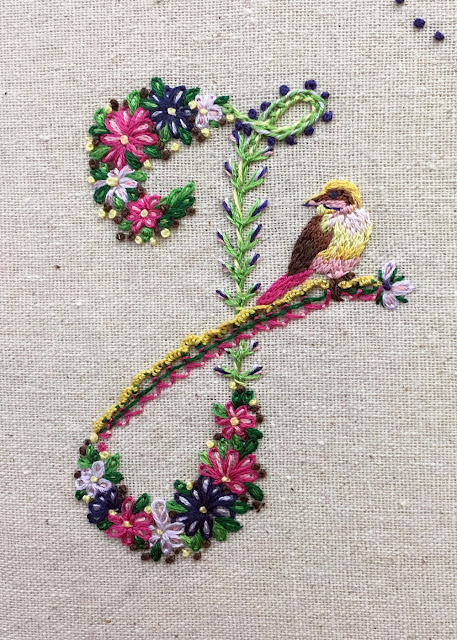 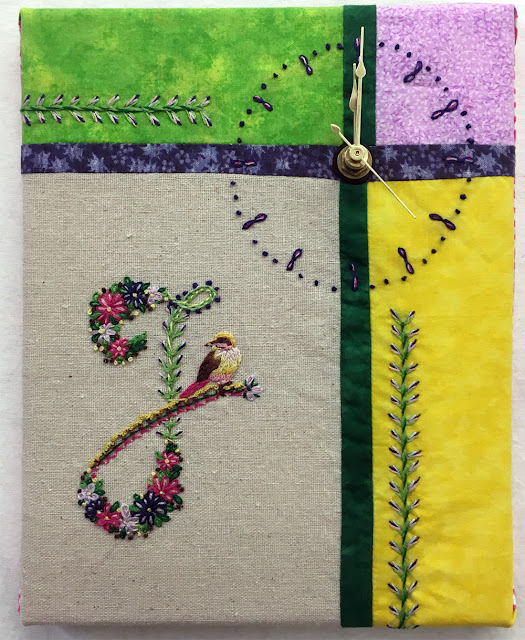 I had a fun time working on this, and hope my partner enjoys it!
Posted by Shannon at 8:00 AM 2 comments: