One of the exercises from the class I took with Jean Wells Keenan earlier this year was to put together a strip set using her freeform curved piecing technique and whatever color palette appealed to us.  I had planned on using oranges and blues along with some creamy neutrals (as you may recognize from the other pieces I worked on in that class here and here) so that's what I used for my strip set. 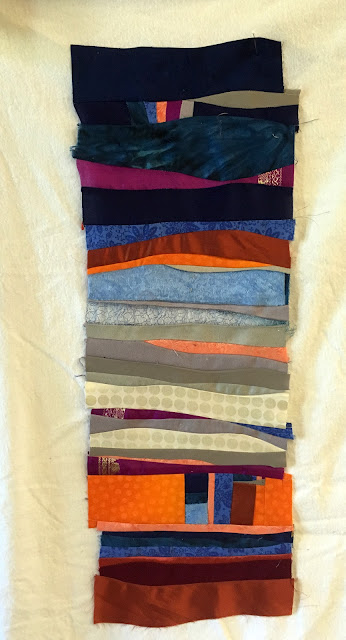 When I got home from the workshop, I decided to try Jean's portrait finish technique, and turn my strip set into a finished mini quilt.  In her portrait finish, she quilts/finishes the central part and then stitches it down onto another fully quilted/finished background piece.   This is similar to how I did the dogs; her work was actually the inspiration for how I finished/mounted that piece.

I auditioned several background colors and although I wanted to love the brights, I settled on the navy on the far right.

After piecing in some colored strips and chunks of piecing to help the background tie in to the central panel, I quilted the background, faced it, and then stitched on the central panel. It's not very big, maybe about 16 x 22, but I thought it was a fun way to finish what would otherwise have turned into another orphan block sitting in a bin! 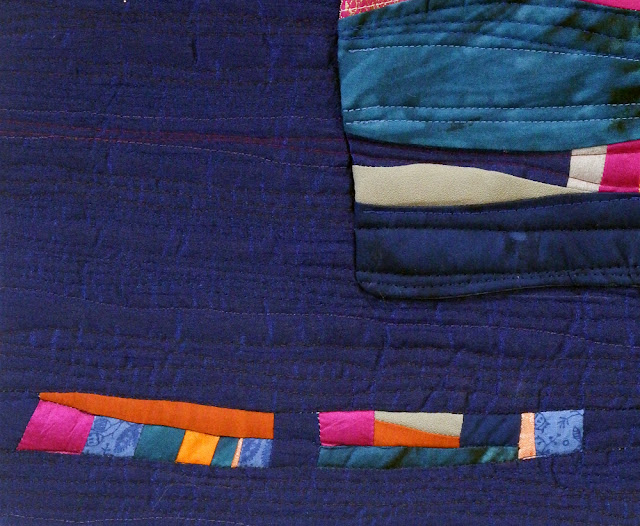 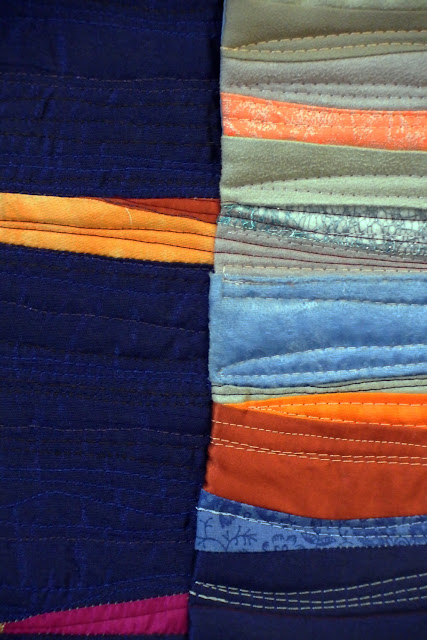 What do you guys do with leftover blocks/class exercises?

I'm linking up with the fabulous Nina-Marie, click over to check out all the other fabulous arty things people are working on.
Posted by Shannon at 12:42 PM 3 comments:

I realized I haven't updated with progress on my Eucharistic Prayer C quilt since early March so thought I'd jump in and give an update.  It's been my primary quilting focus this spring, and I'm really pushing to get it finished!

Back in March I finished the quilting, and after that the next step was to paint in all the quilting in the borders.  I'm going for a dense, richly colored border, something like this or this which meant a lot of quite tedious painting.  I decided to go ahead and block, square, and put the facings on before painting, so that it wouldn't be all raggedy while painting.  Here's what the two panels looked like before I started painting. 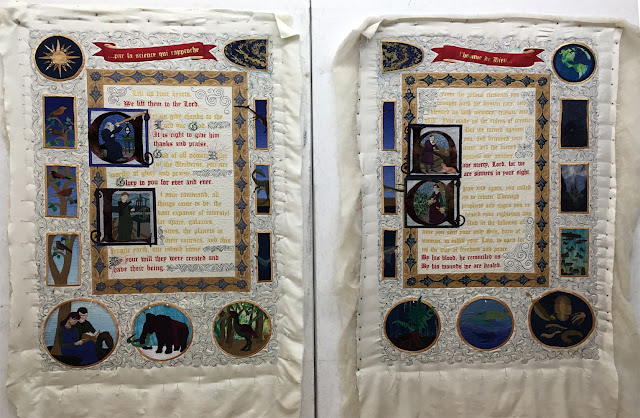 For the painting I used a combination of regular acrylics, setacolor, and fabrico markers.  It was quite challenging as the goal was to stay just inside the quilting lines and as soon as the paint was liquidy enough to apply gracefully, it started to bleed.  I finally just had to give in to the idea that that would happen and let go a bit.  It really took forever, just ask my mom, who for several months would call and ask what I was working on only to hear Still Painting!  My biggest struggle was actually how boring it was which made it hard to get up the motivation to work on it.   I didn't get very many in progress pictures of the painting, but here are a couple so you can see what I'm talking about. 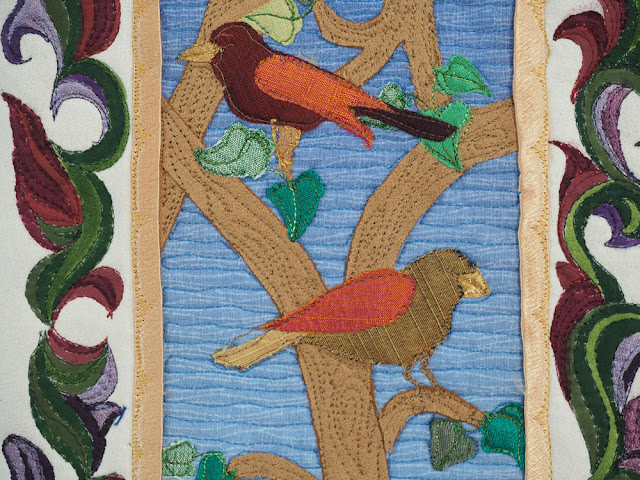 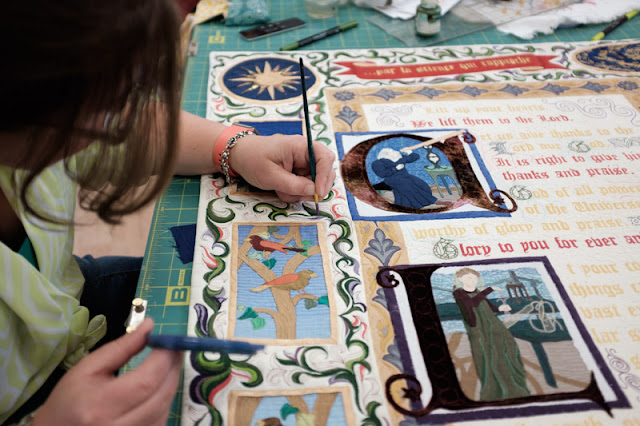 I was so excited to finish the painting, but unfortunately realized shortly thereafter (when I really truly thought I was done) that I'd made a catastrophic error on one of the panels.  Specifically, I'd mixed up the two illuminated initials.  You can see in the first picture below the initial L followed by "t you..."  and in the bottom picture, the initial A followed by "et us..."  As you might imagine, the L goes with "et" and the A goes with the "t you" and I cannot believe I made such a huge mistake.  The whole illuminated initial is 6-8 layers thick, and will have to come off from the blue/purple border forward.  Unfortunately, it's fused down and heavily quilted.

I'm currently now beginning what feels like an insane amount of (quite boring) quilt ripping which is even more fun given how much tedium I just forced myself through with the painting.  Talk about learning lessons the hard way.  I'm just hoping that I can peel the fused initials off cleanly once I get the quilting removed, but it's going to be tricky.  Also tricky will be getting them back down since they're not exactly the same size.  Alas, it's always something. 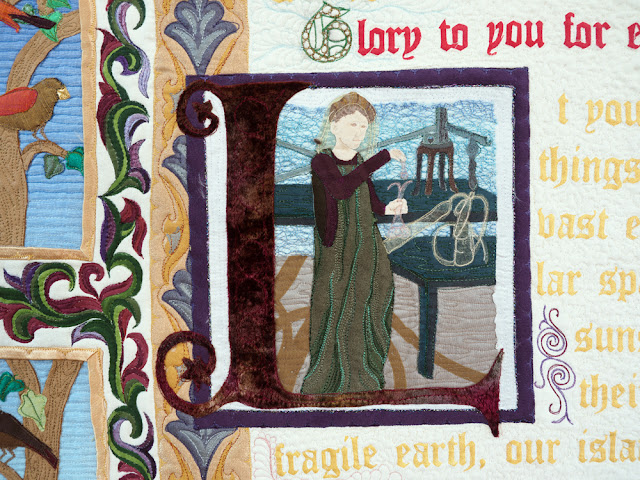 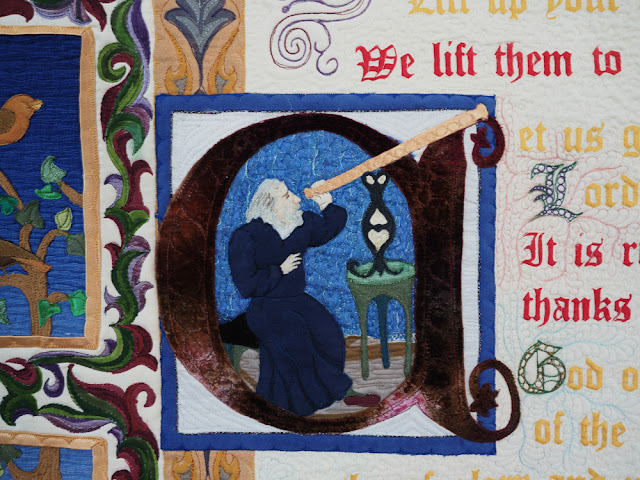 Someday I will be well and truly finished with this, but until then.....
Posted by Shannon at 8:00 AM 3 comments:

It's time once again to send in our 12 x 12" quilts for the annual SAQA auction which will take place later in the summer.  It's a fun thing to participate in-  the small works raise a bunch of money for SAQA and it gives me an opportunity to try out some small things.

This year I started my auction quilt while at the Jean Wells Keenan workshop.  It was the first time I'd pieced improvisationally, and it was quite freeing (and new) for me to not have to plan every single thing.  I was working on a larger piece which I hope to share sometime soon, and piles of little bits of fabric were accumulating near my sewing machine.  On the second to last day of the workshop, I decided to piece together a bunch of these little bits into a pleasing composition ~12 x 12".  It's a mixture of cotton, velour, polyester, silk etc. (always with me it's all kinds of things) but the main background fabrics are some sort of weird pseudo-suede in grey and light purple.  They gave a great soft texture to this piece and the larger piece in which I used them, but they melt/scorch worse than just about any fabrics I've ever worked with, so beware. 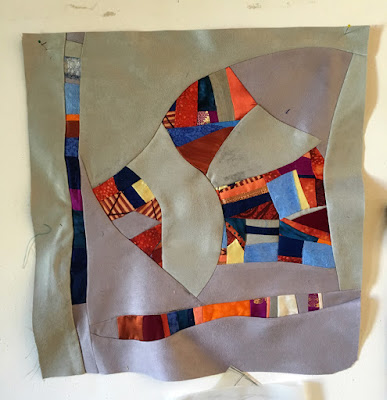 I was really proud of myself to use only the random scraps of things left over from the larger project!  I did a bit of hand stitching using perle cotton, and then quilted it on my machine when I got home. I'm one of those people who can't let abstract things stay abstract, and it looked to me a little bit like a tropical reef fish (with the nose pointing to the left and the fin pointing up), so I named it fish and bits. 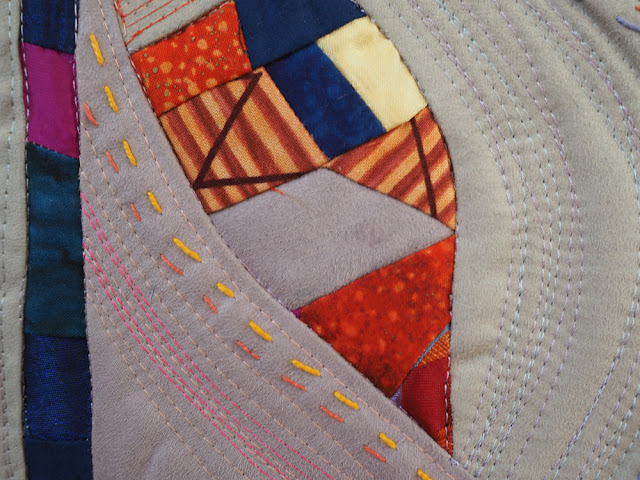 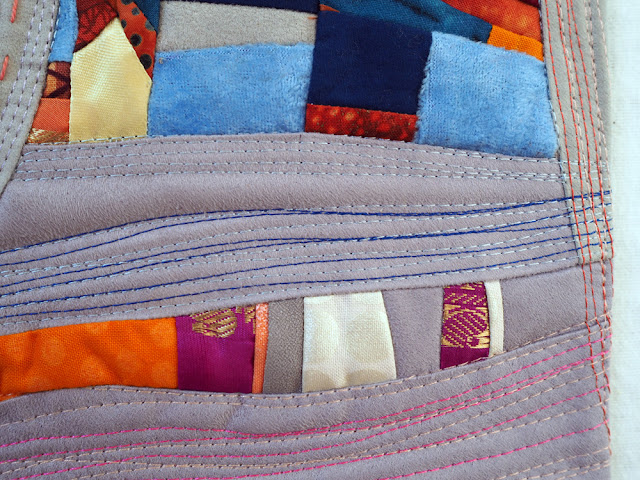 I'm not really a piecer or an improv-er, but that's why I wanted to take the Jean Wells class.  It was really wonderful and pushed me to work in a totally new way.  Have you taken any classes that were like that?  It's such a rewarding experience.