I've been doing a fair amount of knitting lately, there's something easy about just being able to sit down and pick something up and work on it.  Sometimes the activation energy to work on my quilts seems hard to overcome.  Or maybe I'm just a bit lazy :)  At the end of last year the LYS in Norman closed and I took advantage of their going out of business sale to snatch up some yarn.   By the time I got there, the color selection was sort of limited, but I found two skeins of this variegated bright pink-baby vomit green-brown, and a skein of sort of brown olive to go with it.  Unfortunately, I didn't remember to take a picture of the yarn label at the time.  I loved the pink, and the brown actually makes a fairly nice combo with it.  The yarn was pretty intense so I wanted a fairly easy pattern, and settled on the Stephen West Deco Drape shawl.  It was fun to knit, really easy (lots of just garter stitch along with slip stitch color work) so good for knitting while visiting with people.  I blocked it last weekend and finally remembered to take some pictures of it yesterday.  I haven't work it for a full day yet, it's fairly large and wool and after all this is June, but I really love the crescent shape.  I didn't really appreciate that that would be the shaping of the final piece but I find it really wraps well and doesn't fall off compared to some of my other triangular shawls.  I love Stephen West's designs and in future look forward to trying some of the more complicated patterns. 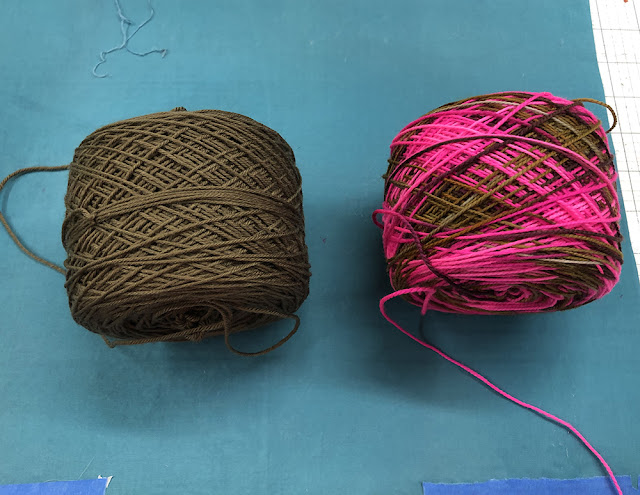 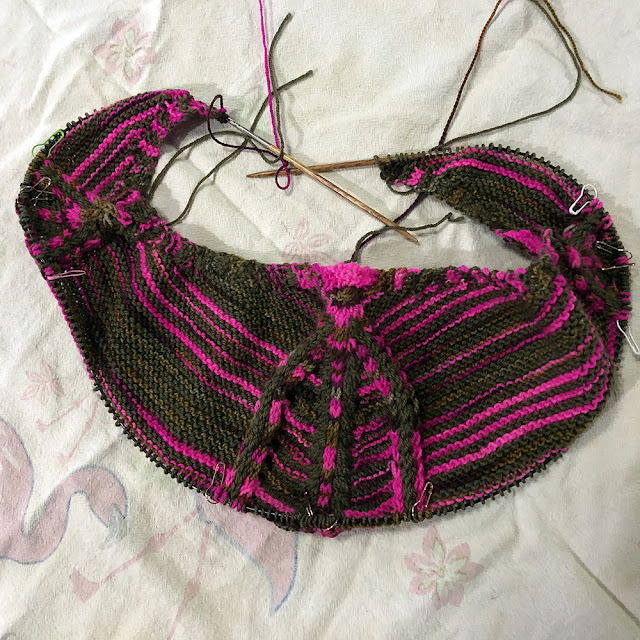 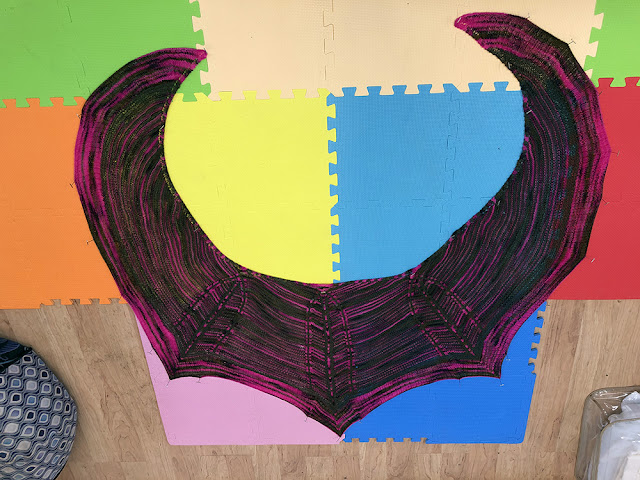 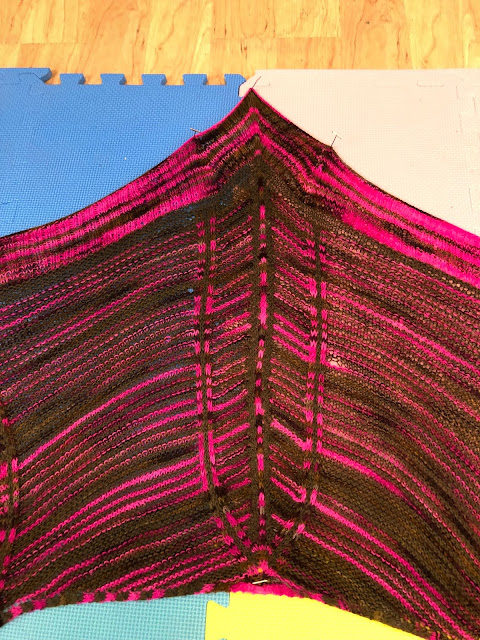 Of course Bentley had to help baste.  *sigh* 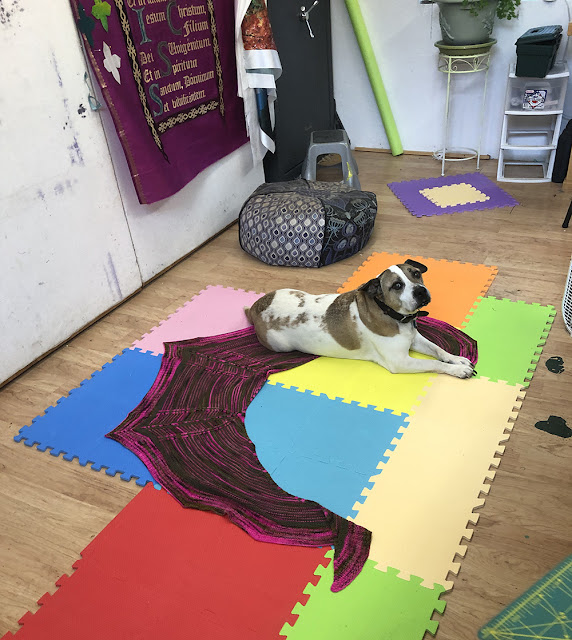 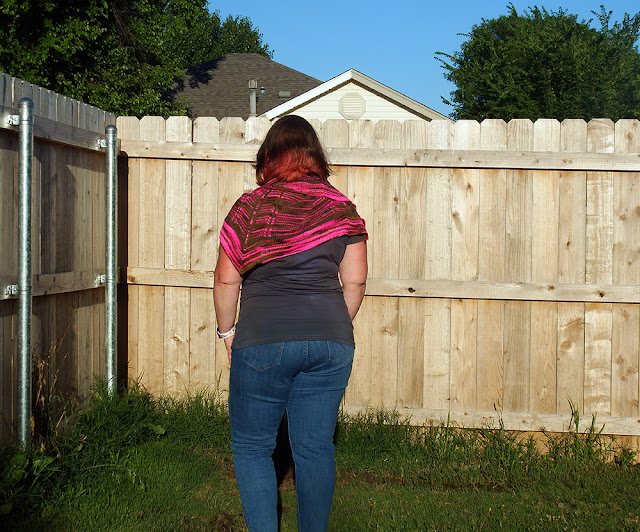 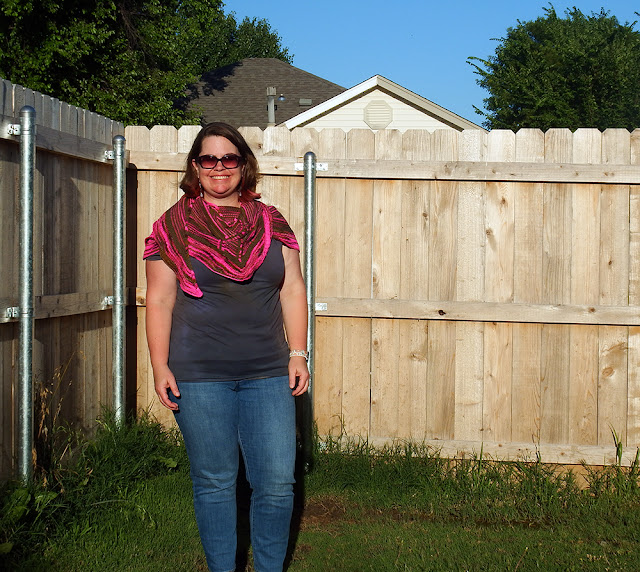 In addition to the shawl, I also recently finished a pair of knitted socks.  I didn't want to haul the shawl to Scotland, but I needed something to work on while traveling.  I started with this skein I got last year at the Kellyville Christmas in July fiber festival.  It was half black/half rainbow and was labeled Morandia's MB Fibers.  Unfortunately all I have is this terrible snapshot of the skein, but maybe you get the idea.  I used the heel-toe-then-open-up-the-leg method my friend Melody taught me, and knit both socks together on two circular needles. It worked fine, except I think my knitting must have severely loosened up since my last socks because they turned out fairly big and loose.  I shrunk them a little, but didn't want to felt them, so part of that I'll just live with.  Also, at some point I accidentally got them all knitted onto the wrong needles and had to untangle, and somehow that led to one of the toes being 90 degrees off!  Like a vertical toe instead of horizontal.  It was so so weird, and I thought I was going to have to re-knit the toe, but it turned out there was enough give in the socks to just twist it around.  I love the way they look- very witchy with the black and rainbow stripe. 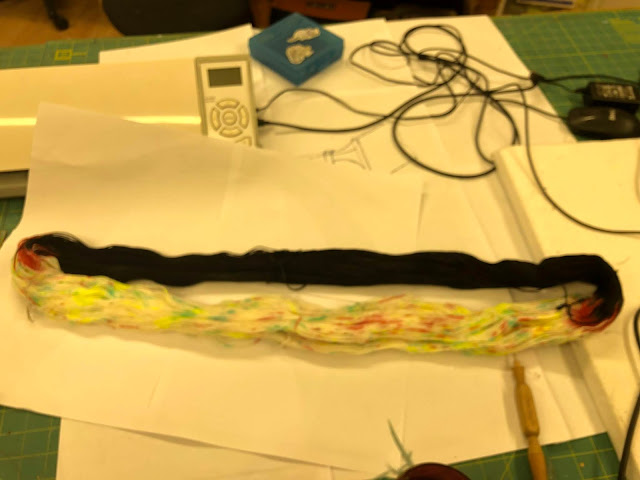 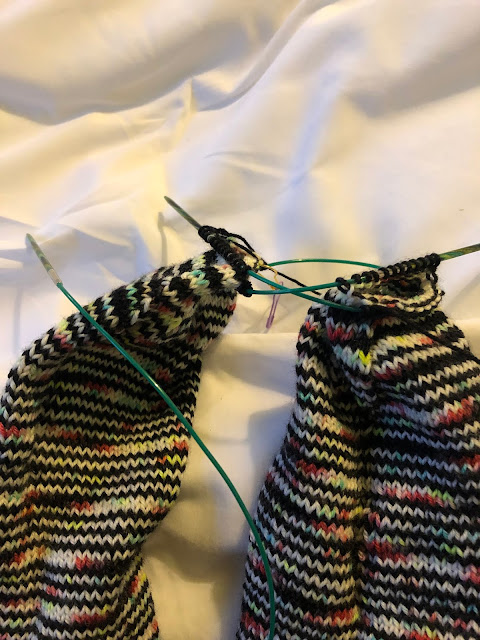 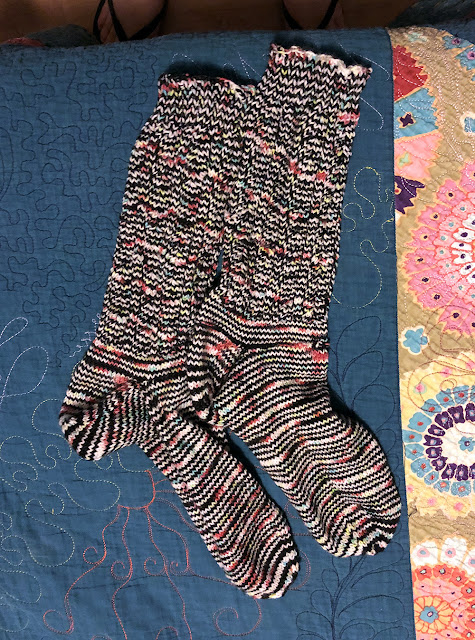 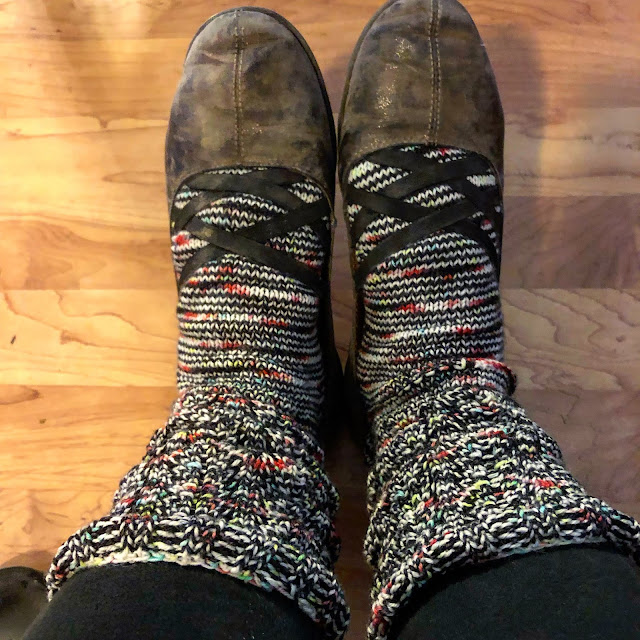 I've got more knitting and crocheting projects going, some small and some large, so there'll be more updates as we go along.  Are you guys knitting or crocheting anything now?
Posted by Shannon at 9:35 AM

Email ThisBlogThis!Share to TwitterShare to FacebookShare to Pinterest
Labels: Knit