The Cow part of the Armadillo and the Cow

I blogged earlier this week about my rainbow armadillo, and I'm back today to share about the next phase of this project.  The rainbow armadillo would be lonely without his cow friend.  But of course she was always going to be smaller than him.  Poor cow friend!

To give her a little depth I made her out of two layers of fabric covered EVA foam and then hand stitched on more vintage painted doily.  She was supposed to look like just a black and white cow, but the laciness of the doily makes it feel like she's wearing jelly shoes and a black veil over her face.  I think she must be a very fashionable cow?  Her tail is made from some small bits of alpaca yarn which somehow seemed fitting.  It's a bit hard to see in the pictures, but she has a cute dimensional ear, a horn made out of a pretty black glass bead, and a beaded eye.  Sweet cow! 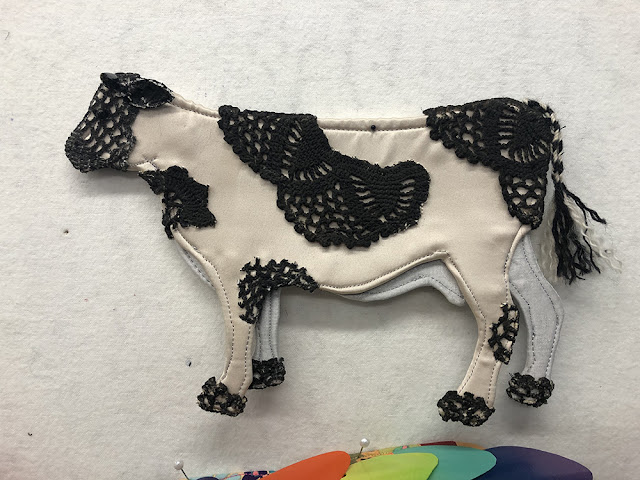 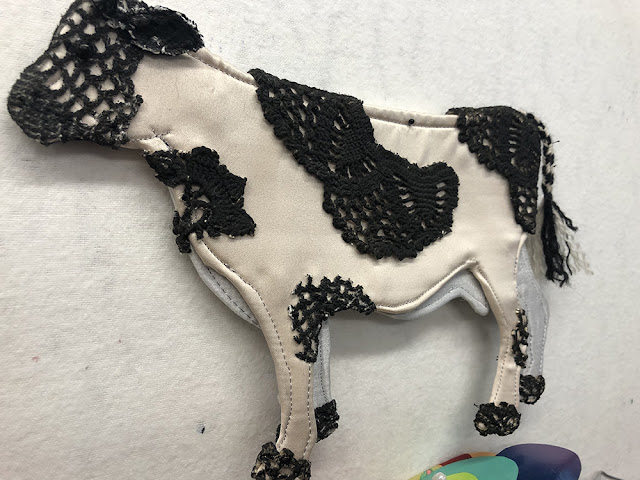 Both the cow and the armadillo needed a background to live on, and early on in the process I decided to use recycled light and electron microscopy images for the background.  I'm not sure why, but sometimes you get an idea and just have to run with it.
The images are old printouts from the days before we had good digital cameras, so they're on stiff shiny photopaper.  The ones on the bottom are light micrographs of the mouse retina.  Some are from blind mice and some from normal mice.  The ones in the top half are electron micrographs with labeling for specific retinal proteins.  I have folders and folders of them from old lab studies.  I think they're super cool, but we don't have any use for them at work anymore (and I have digital scans of them anyway).  The background is black felt with a layer of peltex in the middle.  It was pretty stiff to quilt (between the peltex and the thick photopaper) but I knew I'd need a stiff background since the armadillo and cow would be protruding forward off the front.  Even with the stiff background, the whole final quilt is going to have to mount to a backing board I think. 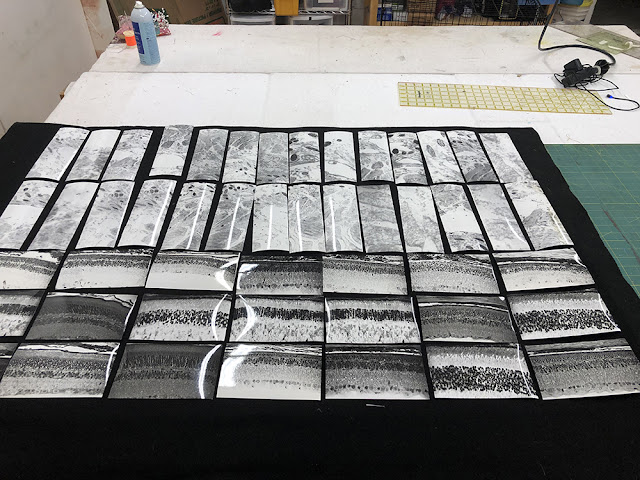 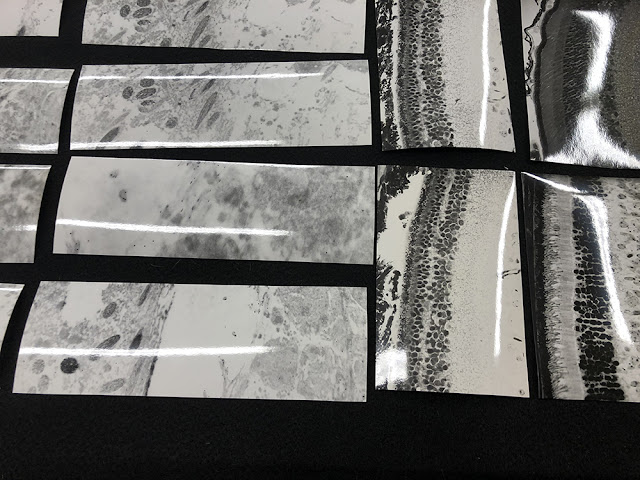 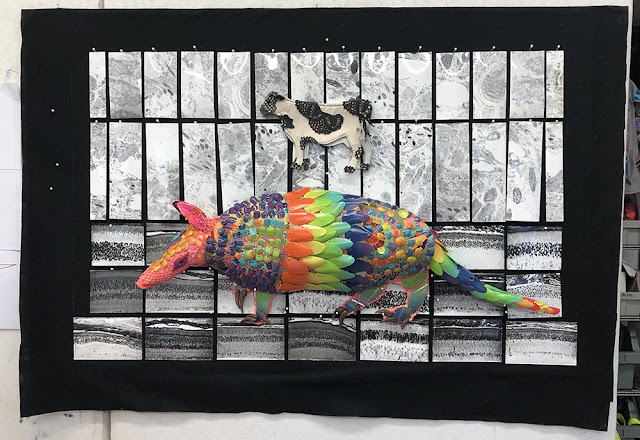 As I started mocking things up on the wall, it became evident that even with the rainbow explosion of armadillo, the whole thing was way too black and white.  I started brainstorming ways to add more color and contrast. I settled on three approaches.  First, I dug out some more vintage doilies and trims I painted, you can see the results of that effort in the final post.  Second, I decided to cut away the pictures from around the armadillo and cow so there would be black around each one to give your eye  a little place to rest.  Finally, I decided to stitch on a brightly colored border made out of rubber stoppers.  We recently moved labs and I discovered a drawer full of hundreds of black rubber stoppers, more than our lab could use in three lifetimes.  Inspired by my friend Susan Lenz who has a fantastic series of mandalas featuring stitched found objects, I thought why not sew on the stoppers.  Conveniently, I had a whole bunch that already had two holes in them, so I brought them home and painted them! 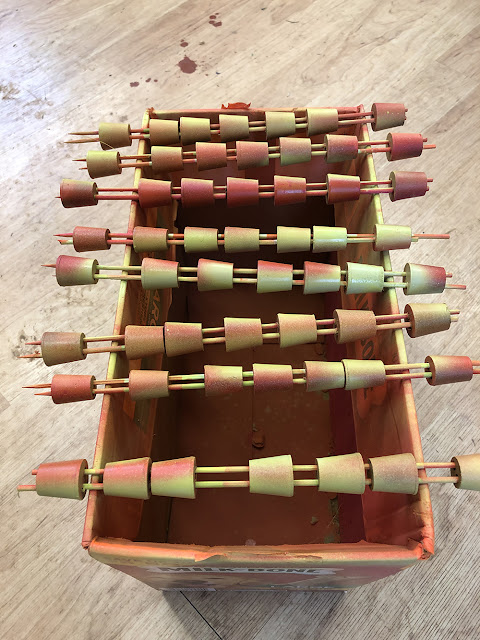 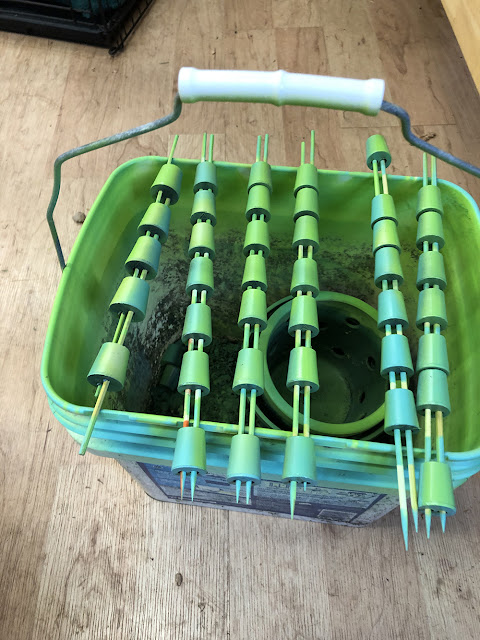 This project involved a lot of pinning up and taking down and seeing how things looked.  My studio was an absolute explosion of disaster during this project.  Little bits and bobs and pieces of stuff and paint were everywhere, but it was so fun to work on.  Come back later this week to see the final quilt!

Email ThisBlogThis!Share to TwitterShare to FacebookShare to Pinterest
Labels: Armadillo

View my complete profile
I'm super excited to have a place to show some of my quilts and projects. I consider myself an Art Quilter with-a-capital-Q, but also love to draft and make bags, dabble in embroidery and crochet, and generally participate in the awesome craftiness that the modern blogosphere has facilitated! If you like what you see, I hope you'll consider adding my blog to your RSS reader or following along.